Dear Parents: No Tantrums with My Tacos 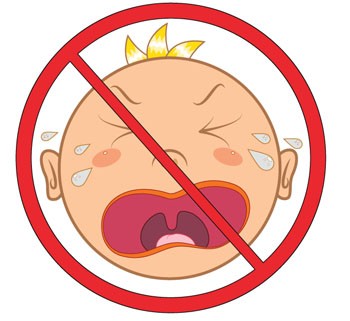 Your child is special, and he's normally not like this. I know. It's important to expose children to fine dining and culture, and just last Friday, when you brought him to Bohanan's for pre-theater dinner and drinks, he watched that little iPad until he fell asleep, the angel.  The waitress said she had never before seen such a well-behaved child. Tonight's screaming and food-throwing must be an anomaly.

Anyway, it's hard to ask a two-year-old to sit quietly for so long. I'm a mother of two young children myself.  I understand. But there is something you need to understand: you are ruining this for the rest of us. This might not be a Michelin three-star restaurant, and I might have plans to drink three-dollar beers at Bar America after this, but this truth exists here in San Antonio as it does at Alinea in Chicago. Your kid is special, but tonight he totally sucks and you need to get him the hell out of this restaurant.

Family-friendly San Antonio is quickly becoming foodie-friendly, and we are in a unique position to integrate two worlds often held mutually exclusive in other cities: the world of the fish stick and the world of the fish foam.  For many of us, our children were born at the same time as the hip downtown restaurants that are pulling people back from the suburbs. We parents, restauranteurs and chefs must ensure that our children play well together.

So Parents, let's talk common sense rules.  There is only one.  If the person sharing a table with you can't quietly blend in with other people in the restaurant, get him out of there. Back in his kitchen, Chef Achatz didn't shudder when baby flesh crossed the threshold of his restaurant. He noticed when, above the din of a commercial kitchen, he heard an infant's screams and then he heard his other guests' complaints.

Let's not talk of banning children from restaurants but of banning childish behavior, in which I include the irrational belief that the people around you either don't notice or don't care about the cacophonous eruption at your table.  A poorly-behaved child is no more noticeable than a poorly-behaved adult. No matter the age of your dining companion, if he starts screaming, throwing food or . . .poop smell . . .he's got to go, and if you're his ride, I guess that means you, too.

Restaurant staff might not feel as comfortable posting No Screaming Children signs as they are No Cellphones signs, but they should feel justified in asking parents of loud children to take it outside.

Your child is special, and I will forgive him.  But if you don't admit temporary defeat and ask for the check, I will not find it as easy to forgive you. Tonight may not be your baby's best night, but I will applaud your determination to try again tomorrow. We'll be out there, too.