Dear Peter Holt: Thanks for All You've Done for San Antonio 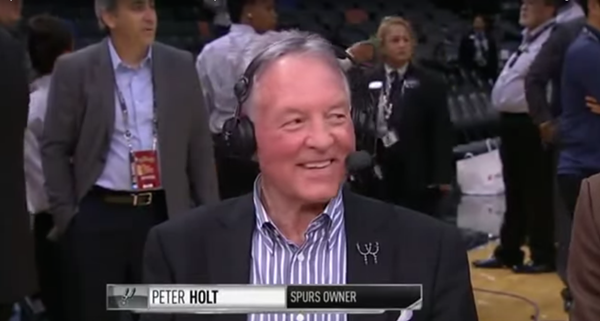 When my family moved to San Antonio in 1995, I was an adolescent entering the sixth grade.

At the time, one of the most important values in a place to live was a championship sports team. You see, I was born in Cleveland, Ohio, a city that hasn't won a championship since the Browns triumphed in the pre-Super Bowl era NFL Championship in 1964 — 20 years before I was born.

I moved to the Alamo City from Miami, Florida. However, I never identified with South Florida teams because I was loyal to Cleveland, mostly because of my extensive family ties to the city.

But the Spurs changed that.

But I know who he is now. And I want to say thanks.

Even if it's shallow, a champion professional sports team was important to me as a kid. And the Spurs' success helped ease me into my new life in Texas.

I'm older now, and know way more about San Antonio, and my values concerning what I want in a place to live have certainly matured. But along with that maturation, so has my appreciation for the Spurs and the world class team they've become.

“I’m proud of what we’ve achieved over the last two decades,” Peter Holt said in a press release. “The championships are wonderful, bringing new sports franchises to San Antonio is important but the biggest accomplishment for me will always be the impact we’ve had in our community. The pride, support and love that our city has for the Spurs is truly amazing.”

His wife, Julianna Hawn Holt, will assume both roles as Chairman and CEO. Peter Holt will remain on "the organization's board of managers and continue as part of the ownership group" while his wife "will become the team's Governor on the NBA's Board of Governors," the Spurs announced in a press release.

So thanks for your part in the last two decades of Spurs basketball. It might be minuscule, considering your accomplishments, but thanks for helping a shy kid identify with his new home through the wonderful game of basketball.