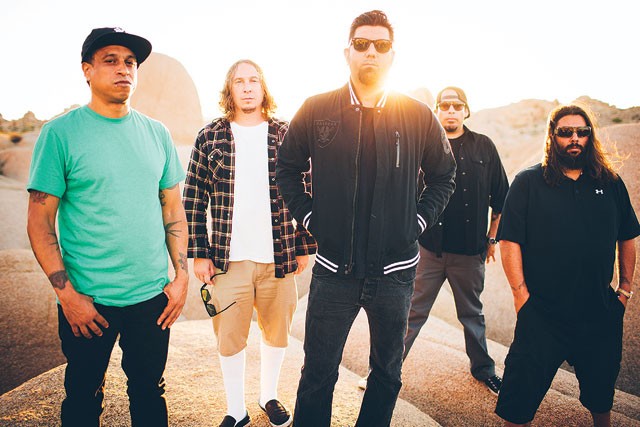 As Deftones were preparing for the release of Koi No Yokan on November 13, the feeling within the band could not have been better. "I'm just thrilled to be where we're at now," drummer Abe Cunningham said in an early October phone interview.

Cunningham isn't really talking about the level of popularity of the Deftones, although his band isn't doing too shabby in that department either. What he's talking about is the turnaround that has occurred within the Deftones, considering that not too long ago there was legitimate reason to expect that the group might be on its last leg.

First, there was the long and difficult ordeal that was the making of the group's Saturday Night Wrist (2006), a project that began more than three years earlier and saw tensions in the band reach a point where the group nearly fractured. Then, in November 2008 the band suffered another major blow when bassist Chi Cheng was left in a coma from injuries suffered in an auto accident. Whether he will ever regain full control of his faculties remains in serious doubt.

But in 2010, the band members — Cunningham, vocalist Chino Moreno, DJ/keyboardist Frank Delgado, and guitarist Stephen Carpenter — reconvened, invited friend Sergio Vega to take over for Cheng on bass and soldiered forward with the writing and recording of its sixth studio album, Diamond Eyes.

"When we completed writing Diamond Eyes, we all looked around and we were like, 'We can't wait to do the next one,'" Cunningham said. "We were so stoked and so thrilled. We went out and did a tour for like a year and half or so on that. We were just really, really eager to get back in and get back to work."

Like Diamond Eyes, the new CD was a smooth and efficient process produced by Nick Rasculinecz and recorded in Los Angeles. "Good things come out of tension, too, but we've had enough of that," said Cunningham. "We're ready to have good times now."

It's not just the good vibes within the band, though, that have Cunningham excited about being in the Deftones — he also thinks the band just keeps getting better.

"Everyone always says their newest record is their best, 'It's the best thing we've ever done,' whatever," Cunningham said. "We were all self-taught and learned, and didn't learn, along the way, but we just figured out how to craft songs now. It's just a very tight, concise record."

Koi No Yokan (roughly translated as "the imminence of falling in love") continues to display the hallmarks that have helped define the Deftones from day one: a balance between harshness and beauty that comes from the band's heavy guitars, Moreno's sometimes feral vocals, and often downright pretty melodies.

"I think we've always had the contrast of aggression and beauty," he said. "I guess that's our trademark. But there has always been a focus on groove. It's got to feel good. We just popped this puppy out."