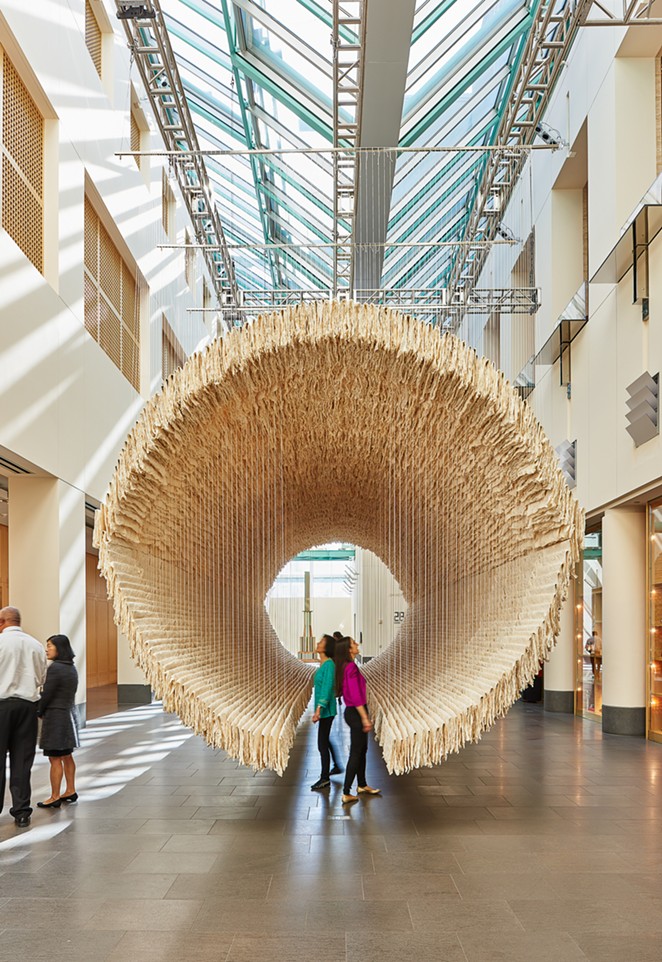 Think of China. Go ahead, I’ll wait a minute.

Depending on your experience, you may be thinking about Tiananmen Square, or Chairman Mao and the Communist Party that has ruled China since 1949, or that party’s horrible yet oft overlooked human rights record ($$$), or the dizzying population numbers (nearly 1.4 billion as of 2013), or the 2008 Summer Olympics, or the occupation and demoralization of Tibet.

Maybe you’re a bit of an academic, or a historian, and you’re thinking of China’s rich, ancient and proud history in the arts, in philosophy, in architecture, in medicine, in weaponry, in strategic warfare, in culinary arts, in invention and innovation. Maybe you’re of a mystical bent and you’re thinking of the old masters of Chinese thought like Confucius, Lao Tzu, or Zhuangzi, great spiritual teachers whose radical ideas on freedom, discipline and the way still inform contemporary China and beyond. Maybe you’re one of the Americans who have been fortunate enough to visit and spend some time in China or you’ve experienced it, vicariously, through Anthony Bourdain or some other travel/food program or book.

Whatever your experience of the People’s Republic, whatever it is that you think when asked to ponder that vast, strange and beautiful land and people, you are probably right. On the other hand, no matter how extensive your experience may be, your conception of China is almost certainly incomplete. And, quite frankly, it always will be. Given China’s size, diversity and political climate, it is a fool’s task to think that you can figure China out or pinpoint its principal concerns, quirks, alacrities and treasures. All the same, embracing the endless mystery of China is intoxicating.

While San Antonio might not offer a plethora of opportunities to connect with the culture(s) of China, the ongoing “28 Chinese” exhibit at the San Antonio Museum of Art is one such opportunity that is not to be missed. The exhibit, which is part of the staggeringly massive personal collection of Donald and Mera Rubell — one of the largest privately owned collections of contemporary art in the world — showcases the work of 29 (one artist was added late in planning) contemporary artists working in China, all born 1954 or later. Collected over the course of 10-plus years, six research trips and over 100 studio visits by Don and Mera, this impressive and wildly diverse set of artwork functions like a breathtaking snapshot of China’s chaotic and ephemeral soul. Though, to be sure, no single definition of China or Chinese art would be possible or fair. In a recent email exchange with the San Antonio Current, the Rubells indicated that, like so much in contemporary Chinese art, their deep foray into Chinese studios and galleries was catalyzed, at least in part, by dynamic all-arts agitator and revolutionary Ai Weiwei.

After meeting and falling in love with the work of artist Zhang Huan (who has four provocative photo pieces in the exhibit) in New York City in 1999, the Rubells were invited to join him and his wife on their return to China. It was on this initial trip that they met Weiwei. They fondly remember “a celebratory meal he generously hosted [for a group of artists] at a big round table with endless exotic dishes.” A pivotal moment on an important journey of discovery, that meeting “opened the window for [the Rubells’] engagement with artists [in China].”

In writing about the exhibit as a whole, the Rubells remarked that “The message is a recurring one, that when you remove characteristics unique to each place, something universal that comes through, the language of humanity. Images transcend differences.”

Continuing, the art power couple noted what visitors to the exhibit will likely be most struck by:

“The artists in ‘28 Chinese’ are very diverse. In fact, if one saw the work without hearing the name of the show, one might not realize it’s a show of Chinese artists only. What comes across is the sophistication of the works and their dialectic with art history and the contemporary art world. The Internet in particular has opened the global world of art to them.”

When asked to compare contemporary Chinese art to contemporary art in the United States, a question that practically demands oversimplification, the Rubells explained “one difference is that Chinese artists reference a longer history than U.S. artists. Also, because of the Cultural Revolution during which history was suppressed, many artists today want to learn about and honor China’s long history inside their work.”

In a recent on-site interview, SAMA Contemporary Curator Anna Stothart — who clarified that she “inherited the exhibit” — told the Current that it was actually at the behest of SAMA’s Director Katie Luber and others that the Rubells decided to travel this show in the first place. The only other place the exhibit has visited, or will visit, according to current plans, is San Francisco’s Asian Art Museum. It is worth noting, Stothart explained, that “the actual selection of works at the SAMA exhibit is different from the selection in San Francisco,” because curators were able to pick from a large amount of work from each artist.

One of the unique things about the San Antonio incarnation of “28 Chinese” is that Stothart and her team created “loose thematic organizations of the works.” The categories — Social and Political Art, Landscape, Abstraction and Contemporary Portraiture — “allow the visitors to explore the collection in digestible chunks,” rather than approaching it as a somewhat overwhelming whole. 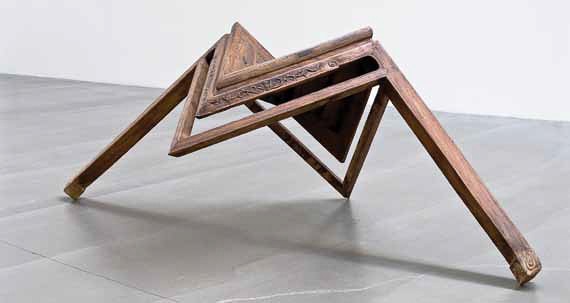 While contemporary Chinese artists’ work displays a variety of concerns and infatuations, social and political art is perhaps most in line with what folks might expect from art under the leaden shadow of totalitarianism. In many of the works under this thematic umbrella, there is a profound tension between old and new, freedom and restriction, consumerism’s excess and Confucian (or Maoist) restraint.

Highlights of this section include Ai’s wooden sculpture Table With Two Legs, a commentary on revisionist history, craftsmanship and the impracticality of fine art, Zhu Junshi’s gigantic and enveloping installation Boat, which submerges the viewer in the simple serenity of rice paper, and Qui Zhijie’s Memorial for Revolutionary Speech, which builds a monolith out of a historical litany of protest cries, tracing the history of both calligraphy and revolt in China.

The idea of a landscape, like the idea of a portrait, tends to call up very traditional and idyllic connotations. The landscapes of “28 Chinese,” however, do not depict natural settings or focus on light.

Lui Wei’s wild futuristic landscape Liberation No. 1, among the cornerstone pieces in the exhibit, was created by first imposing an intricate, computer-rendered grid, resembling an impressive city skyline, onto a huge horizontal rectangle of canvas. Then the artist meticulously filled in the regions of the grid in an infinity of color, creating an overwhelming rush, a dizzy and sublime awe. If this is a city of the future, it’s as delightful as it is menacing.

The smallest thematic segment of the exhibit, Abstraction, showcases the investigation of process as much as anything else.

Like several of the pieces in this portion of the exhibit, Wang Guangle’s 130905 repeats an intricate pattern. Unlike any of the other works here, however, Wang’s densely layered, black-and-white-striped square, observes an important burial tradition from Southern China. As the artist explains in the Exhibition Catalog, “when a person is not feeling well, he prepares a coffin for himself. He paints a coffin for himself, but if he doesn’t die, the following year on the same day he paints it all over again. Some old people even paint over it dozens of times. This is called applying ‘longevity paint.’”

The art of portraiture has evolved, over the centuries, to include more nuance and metaphor. With this evolution has come a loosening of definitions and a de-literalizing of the entire process. The challenging portraiture within “28 Chinese” certainly bucks against the very concept of a portrait. For one, as Stothart noted, “these are portraits, but there are no faces.” Indeed, the face, one of the traditional focuses of portraiture is largely eschewed here.

The most striking piece here is He Xiangyu’s The Death of Marat, which is a life-like sculpture of Weiwei, lying face down as if he’s been assassinated. The work pays homage to Weiwei by comparing him to the great French revolutionary Jean-Paul Marat and alludes to Jacques-Louis David’s landmark 1793 piece by the same name.
Meanwhile, Hu Qingyan’s One Breath-Portrait of the Rubell Family is a marble sculpture of a plastic bag that the artist used to collect one breath from each present member of the Rubell family. As such, Hu’s sculpture turns portraiture inward, contemplating the tide-like life-force within.

Another favorite in this stacked segment of the collection is Liu Chuang’s Buying Everything on You-Dai Huan. In this reinvention of the portrait, part of a larger series, Liu offers a unique and startlingly frank depiction of a human being. After buying everything on this woman’s person, he arranged the items in a kind of pseudo-collage of personal artifacts, thereby commenting on her status as an aggregate of things and simultaneously exposing her more intimately than any traditional portrait ever could.