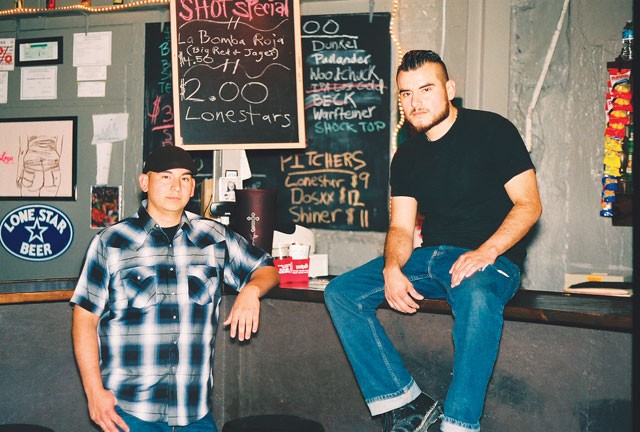 Late last month, a brand-new bar and music venue named Hi-Tones opened its doors on the St. Mary’s Strip to an eager crew of partyers. People danced to Piñata Protest, cheap booze and good vibes flowed, and a refreshingly mixed crowd spilled out onto the bar’s makeshift patio. The scene was unfussy, unfancy, and totally fun. One thing was crystal clear: A dose of newness in the old stomping ground is just what the doctor ordered. After witnessing so many happy people in one (bright blue) place, we had to catch up with Danny and Miguel Delgado, the brothers making it happen.

What are your day jobs?

Danny Delgado: I’m a former teacher, but I quit.

DD: Yeah, I worked for the city with at-risk kids.

And are you native San Antonians?

DD: Born and raised on the Westside.

Is this your first project?

DD: This is our first time doing this.

Has it always been a dream of yours?

DD: I wanted to open a bar in my early twenties [but] the people who wanted to come in with me always back out. So when my brother decided he wanted to jump in on this, we went looking for some spaces and we found this spot. And the owner of the building, we got ahold of him and we ended up knowing a lot of the same people from the music and art scene.

How old are you now?

How long was it vacant after Gigabytes and Java closed?

DD: Honestly, I think it was a couple of months, several months. I had never come inside this building. I was at work and during my break, I came down the Strip and I saw the “For Rent” sign. That was the second day it was up.

So what all did you do in here?

DD: We added the bar, added some restrooms.

DD: There’s two floors actually, and we just never opened it. This is an historical building so we can’t really knock down the walls. The owner was here earlier and I was talking to him about it and he was telling me this used to be a grocery store back in the day. And a vacuum store.

So it took you about six months it sounds like.

DD: To get our liquor license and fix the place up.

Tell me about the patio.

DD: We’re hoping eventually to make it an actual patio and cover it.

Do you have a set genre you’re going after in terms of live music?

DD: We’re open every day from 8 p.m. to 2 a.m. We’re gonna have football games, a lot of people have been asking us. Weekends are basically gonna be our live music days.

Are you doing the booking?

DD: Yeah, it’s going through me.

What else is coming up?

DD: We’re gonna have Burrofest here on the 30th with L.A. David. And we’ll be doing Monkeyfest in November.

Do you know who’s playing Burrofest?

DD: He hasn’t guaranteed it, but for now it’s going to be Piñata Protest, Los de Esta Noche, and De los Muertos.

Do you do happy hour?

DD: No, but it’s really cheap. Like $2 tallies (Lone Star), pitchers are between $9 and $12, $4 imports and craft beers, and $2.50 wells all the time. And we also have some special shots ($4.50) like La Bomba Roja, which is Big Red and Jägermeister. And we also have the Chamoy Drop, made with tequila infused with sweet and sour and some cherries. That one sells a lot. •