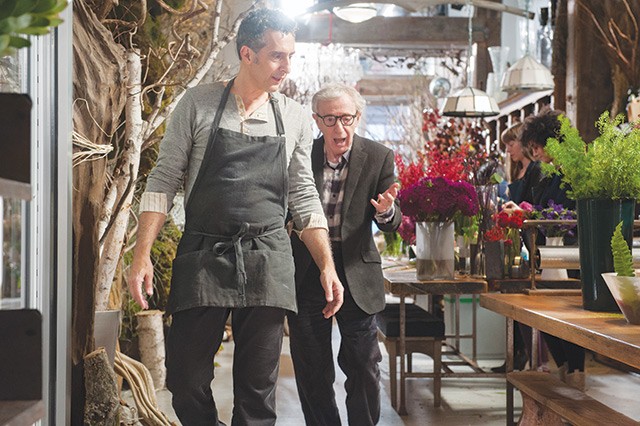 Fading Gigolo is a tough sell. It stars Woody Allen, who, in case you forgot, was in the news again over child molestation claims from the 1990s. A large part of it is about sex, and few probably want to think about sex and Woody Allen right now. It has the word “gigolo” in the title, and the last time that happened we got Deuce Bigalow: European Gigolo (barf).

How delightful it is to report that Fading Gigolo is rather charming. It takes an absurd premise, treats it with respect and then writer-director-star John Turturro lets it roll out in a way that feels organic.

Make no mistake: The movie feels organic. It is decidedly not. That absurd premise—Fioravante (Turturro) is a part-time florist who turns to prostitution to make ends meet—is cockamamie enough that you’d be forgiven for dismissing it outright. But it’s also part of the deal you must make with Fading Gigolo: Accept it for what it is or it won’t work for you.

Fioravante is wise to Murray, and at first refuses. Then he looks at his checking account balance, which hovers around $650, and agrees to try a one-on-one with the dermatologist, Dr. Parker (Sharon Stone).

And herein lies the point when you, as an audience member, face the ultimate on-board-or-not test: The last entry in Fioravante’s checkbook is a check made out to cash, as if it were 1983. That’s the planet on which Fading Gigolo lives—a simpler time when there were no ATMs, and rich doctors with crappy marriages paid for sex with a florist instead of having a fling with someone from an AIDS benefit.

Murray gets to work, and he and Fioravante hit a hitch when Murray rekindles a friendship with Avigal (Vanessa Paradis) and persuades her to become a client. See, Avigal is Chasidic, and a widow—Murray knows her because he bought books from her husband—and she’s so lonely that she’s almost desperate from human contact. She just doesn’t know where to begin.

Fioravante’s work with Avigal is different from his other work—he also has sex with Selima (Sofia Vergara), Dr. Parker’s best friend. There’s no intercourse with Avigal, but the sessions are so intimate that Fioravante gets emotionally involved.

No one ever warned him that you don’t get high from your own supply, and soon he’s faced with a moral dilemma and scrutiny from the Chasidic community, including Liev Schreiber as a neighborhood watchman with a thing for Avigal.

Fading Gigolo is silly, but there’s a sensitivity and—dare I suggest—tenderness to it that makes it easy to overlook the silliness. The screenplay wouldn’t work without the right performances, and Turturro gets what he needs from his actors—especially himself.