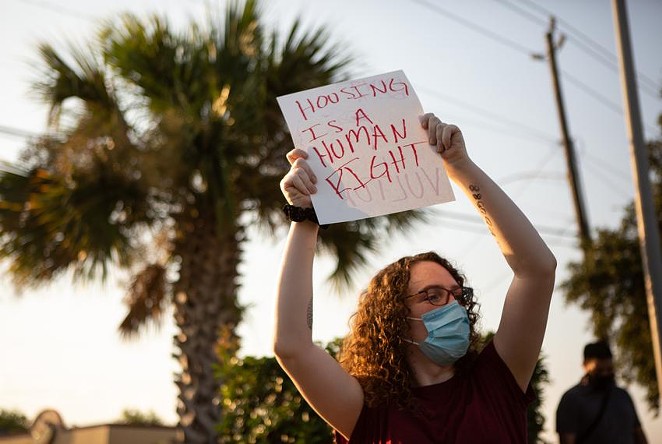 Texans behind on their rent are at increasing risk of losing their homes despite a federal moratorium on evictions, according to housing attorneys, because a Texas Supreme Court order aimed at forestalling evictions has expired.

The nationwide order from the Centers for Disease Control and Prevention halting evictions through June 30 — originally issued under the Trump administration — has been an important bulwark against a housing crisis as people lost jobs and income during the pandemic, housing advocates say.

But an emergency order issued by the Texas Supreme Court that instructed judges across Texas how to follow the federal mandate expired March 31.

Without the explicit backup of the moratorium from the state's highest civil court, Texas landlords could resume pursuing evictions of people affected by the pandemic, housing advocates said, and it could fall to the federal government to enforce the CDC order.

“A lot of people have been saying for the last year that this eviction wave is coming and that we are about to step off this cliff into the abyss. With this latest news, we just stepped off that cliff. This is the worst case scenario,” said Mark Melton, an attorney who has helped hundreds of Dallas-area tenants during the pandemic. “This basically says that if a landlord wants to risk federal prosecution, that’s their business, not our problem. And if they want the eviction we have to grant it under state law.”

The Texas Justice Court Training Center, which trains judges and issues procedural guidance, has updated its eviction-related guidelines to say that Texas courts can proceed with eviction cases, although “the landlord might choose to place this case on hold.”

“This just means that the courts in Texas would follow Texas procedure in law, which doesn’t have anything in it about the CDC moratorium. Now there could be local laws that would maybe have a moratorium,” said Theadora Wallen, the training center's executive director.

To be protected by the CDC order, renters must sign a declaration stating they risk homelessness due to effects of the pandemic, among other requirements. The CDC order subjects violators to fines up to $100,000 and a year in jail. The penalties are steeper if violating the order results in death. Until March 31, justices of the peace in Texas played a key role enforcing it, halting eviction proceedings they believed violated the CDC order. Now it will be up to individual judges to decide whether to follow the federal orders.

Meanwhile, a Texas program meant to financially help renters who have fallen behind has barely taken root.

“In essence, the Texas Supreme Court and the state’s leaders are abdicating their powers and moral obligation to protect renters from homelessness. Meanwhile, the $1.3 billion state-run rental assistance program has stumbled. As of less than two weeks ago, fewer than 130 payments had been made,” said Christina Rosales, deputy director of the advocacy group Texas Housers, in a statement. “Program administrators, who had aimed to process applications within 14 days, say that 60 days is closer to average. If landlords are able to evict tenants who have applied for rent relief, the program will fail before it has had the chance to succeed.”

According to Kristina Tirloni, spokesperson for the Texas Department of Housing and Community Affairs, as of April 2 the program had provided $2.3 million in rent relief for 358 households. But when TDHCA announced the program in February — tapping federal funds — the agency said it hoped to help around 80,000 households.

“Texas received more than $1 billion to start this first-time statewide rent program from scratch, with little to no federal guidance,” Tirloni said. “The system will ramp up considerably in the coming days and weeks, and we are preparing to administer another round of funding, approximately $1 billion more, very soon.”

The slow deployment of assistance hasn’t been a problem just in Texas. The Texas Tribune reached out to agencies in the six biggest states, and all have experienced similar delays. Some, like Florida, have not even opened the application process.

For Texans who have lost income, the delays are feeding stress and uncertainty. According to a survey by the U.S. Census Bureau released in March, around 1.5 million households in Texas have slight or no confidence in their ability to pay next month's rent. The problem is most common among Black and Hispanic households. That’s the case for Nini Maldonado, a mother of five in Katy, who has applied to city and state rent relief programs with no success.

“We would call the customer service hotline and no one would pick up,” Maldonado said in Spanish. “We would be waiting for an hour and then the call would drop. We never managed to get help to fill up the forms.”

Maldonado works in a restaurant, and her husband is in construction. During the last year, both lost hours of work and sometimes were unemployed. On top of that, the couple contracted COVID-19, leaving them out of work in December. Right now, she owes two and a half months' rent, and although their landlord is open to a payment plan, he has also said he is ready to proceed with their eviction.

“He told us that if by April 3 we haven’t paid rent plus $200 [of the amount owed], he is going to court,” Maldonado said. “My husband is a calm person, he tries to stay positive. But I do feel this very hard on myself, I think about where we will go with the five kids if they throw us out.”

Landlords — many also struggling to pay for mortgages and maintenance — also complain about the slow and cumbersome access to rent relief. David Mintz, vice president of government affairs at the Texas Apartment Association, said rent relief is key, and he expects the program to speed up.

“While the Texas Apartment Association opposes the CDC order, so long as it remains in effect we will continue to educate rental property owners about complying with its provisions,” Mintz said. “The real focus needs to be on ensuring the Texas Rent Relief Program, the Texas Eviction Diversion Program and similar programs in local communities are running efficiently.”

Nelson Mock, a housing attorney for Texas Rio Grande Legal Aid, said that the organization's immediate concern is eviction cases that were already in the legal pipeline before they were halted, when the judge had already instructed a constable to proceed with the eviction.

“If a tenant is at the end of the process, where the judgment is final and a writ is allowed, then the tenant is given 24-hour notice and removed,” said Mock, who has heard of many evictions that were stopped at the last minute. “Once that pause is lifted, once that abatement is lifted, they will get this almost immediate removal from their homes.”

Given the lack of protection for tenants in the state’s new guidelines, having legal advice could be key for people risking eviction, but in Texas most of them appear in courts on their own. Many avoid court altogether. Mock said that many attorneys and advocates are asking the Texas Justice Court Training Center to change its recommendations and, in the meantime, are advising tenants to be proactive and seek legal aid.

“Anyone who has the protections of the CDC order should be urging the courts to follow the CDC order,” Mock said. “To the extent that they have a landlord who is not following the order, there is a help line, a complaint line that the [Consumer Financial Protection Bureau] has set up. Tenants should be reporting these problems.”

Disclosure: The Texas Apartment Association has been a financial supporter of The Texas Tribune, a nonprofit, nonpartisan news organization that is funded in part by donations from members, foundations and corporate sponsors. Financial supporters play no role in the Tribune's journalism. Find a complete list of them here.