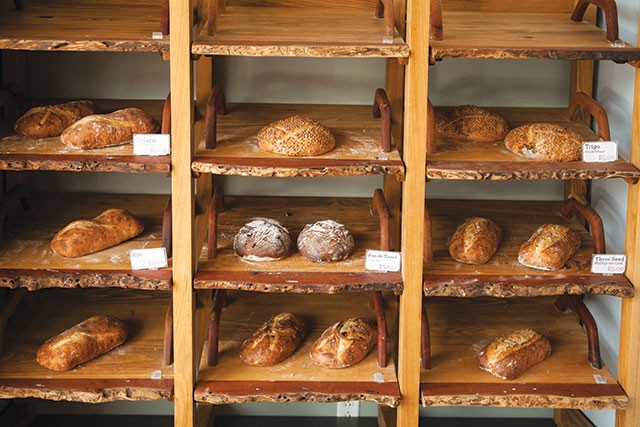 Los panaderos are in San Antonio. Brothers David and Jose Cacéres have opened the first of what could be many locations of La Panaderia, a concept the Cacéres hold dear to their heart.

Their mother, Josefina, owned a panaderia in Mexico City when the brothers were young boys. “I remember selling as a kid in the markets of Mexico [City], yelling ‘Roscas, roscas de cinco y diez,’” Jose said.

The Cacéres learned the art of baked goods in a roundabout way, first helping their mother grow her business and later getting their hands dirty. Youngest brother David completed a culinary arts degree from Le Cordon Bleu in Mexico and the story of La Panaderia was born. They liken their products to those found in Mexican bakeries with twists on the classic French patisserie-style fare.

Patrons can pop in, pick up a tray and load up on pan dulce (the orejas, moños and tequila almond croissant are especially delicious), or grab loaves of Pan ArteSano, a signature process of long fermentation the brothers bill as “bread cultura” that aids in digestive health.

Stop in for lonche and take your pick of telera (or torta-style), birote or croissant rolls and choose between Cubana, chorizo and egg, ham and egg, milanesa, chicken or turkey offerings.

The carb party doesn’t stop at the Broadway location as the brothers still frequent the Quarry Farmers & Ranchers Market (where they first launched their brand late last year), and we’ve yet to pass on the baskets full of pillowy conchas in chocolate or vanilla. We’re digging the new bread cultura.