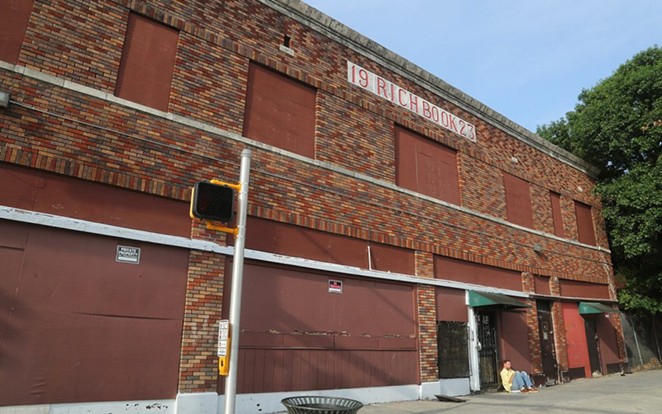 David Adelman, known for spiffy downtown apartment projects such as The ’68 at Hemisfair and the refurbished Maverick building, plans to build in west downtown for the first time with a 122-unit apartment building at Cattleman Square, across the street from VIA Metropolitan Transit’s Centro Plaza station.

He and longtime business partner Barclay Anthony are asking the city’s Historic and Design Review Commission (HDRC) for permission to tear down two historic buildings on land they own at 900 West Houston, which includes the historic Rich Book building, the former location of Cattleman’s Square Tavern.

In asking for demolition, Adelman and Anthony will face headwinds, with many West Side preservationists saying that far too many historic structures have already been torn down in the area. On May 5, the HDRC denied a request to demolish the historic Whitt Printing Co. building, from which Spanish-language publications were once printed, next to the more-recent Golden Star Café.

There is a significant difference between the two requests, however: Adelman has a development plan prepared, whereas the Lim family, which owns the Golden Star, did not. Some of the HDRC’s commissioners said on May 6 that they would have considered voting in favor of demolition if a development plan had been ready.

“I know it will be difficult—these are difficult conversations—but I think in the end I’m hopeful we can move forward with our plan,” Adelman said. “It starts with demolition, and ends with a significant project in its place, and activation. And I think for the benefit of the city, for the benefit of [the University of Texas at San Antonio] and everything they’re doing downtown, it’s critical that we do it.”

Graciela Sanchez, director of the Esperanza Peace and Justice Center, said in an interview that she strongly opposed the demolition request.

“Don’t buy a historic property if you’re going to tear it down,” she said. “I just keep on thinking of neighborhoods in the city. Would Adelman go into King William and say, ‘I’m taking down where the Conservation Society is, where the park is, all those houses?’… He wouldn’t even think about it.”

The Rich Book building was constructed in 1923 in the Victorian Italianate style, and originally served as a clothing and department store, according to a report issued by the city in 1983 about Cattleman Square. Adelman’s development would also require the demolition of what is referred to as the “Office Building,” a smaller structure at 908 W. Houston St. that was built in 1909, and a Pik Nik convenience store at the corner of West Commerce and Frio streets.

The city has declared both the Rich Book and “Office Building” historic landmarks, and they are within the Cattleman Square Historic District. 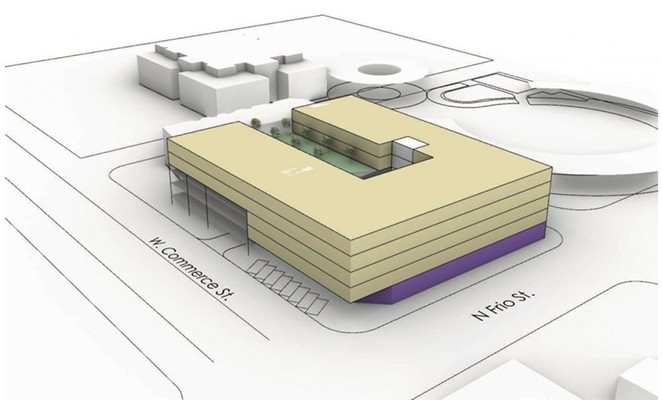 Adelman and Anthony met with the HDRC’s design review committee in March, but the project has not yet been put on the agenda of a meeting of the full commission. Adelman said he hopes it will be considered within the next couple months.

The development plan shows a five-story building with 122 apartments and 19,185 square feet of ground-floor retail wrapped around a 269-space parking garage.

The complex would occupy about the eastern three-quarters of the block bounded by Houston, Frio, Commerce and Medina streets, an area heavily populated by homeless people and transient foot-traffic. On the 100 block of North Medina, the former Santa Monica Hotel and the three-story historic building that houses nonprofit AVANCE San Antonio would remain in place.

“We think it’s a good combination mixed-use, retail and multi-family site, and it probably makes some sense to do some affordable there,” Adelman said. “We don’t necessarily do affordable projects, but I think there’s opportunity to do it there, and so we want to try to learn and understand the business a little bit better to figure out what makes sense.” 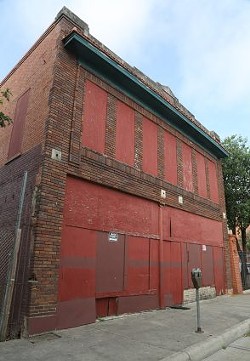 Adelman said he would be willing to partner with a company or nonprofit that specializes affordable housing to develop the site.

Adelman and Anthony — friends since their days at Nimitz Middle School on the North Side — have partnered on several projects together, including the Midtown Station retail center off Interstate 35 in Tobin Hill. They are striving to show the HDRC that it isn’t financially feasible for them to keep the two historic buildings in place. The cost of rehabilitating them would be far greater than what they could collect in rents, Adelman said.

They purchased the property in 2014, hoping to position it to take advantage of VIA’s investment in the Centro Plaza hub and the surge in development downtown, but the surrounding neighborhood has problems with crime and homelessness, Adelman said.

They leased out apartment space on the second floor of the Rich Book building, and unbeknownst to them, some of the rooms were rented to drug dealers, he said. The police raided the building and banned any occupancy there for a year.

Since then, the two partners have tried to market the building for redevelopment, but “the economics don’t work,” he said.

The planned site of the development is two blocks north of UTSA’s downtown campus, which is set to greatly expand with the construction of academic and athletics buildings, student housing, parking garages and street upgrades allowing pedestrians to more easily walk underneath Interstate 10 to get downtown. Adelman said he thinks his development would complement what UTSA is doing.

“The last thing you want to do is try to attract students into a downtown campus and drive them around blighted, empty, vacant buildings,” he said. 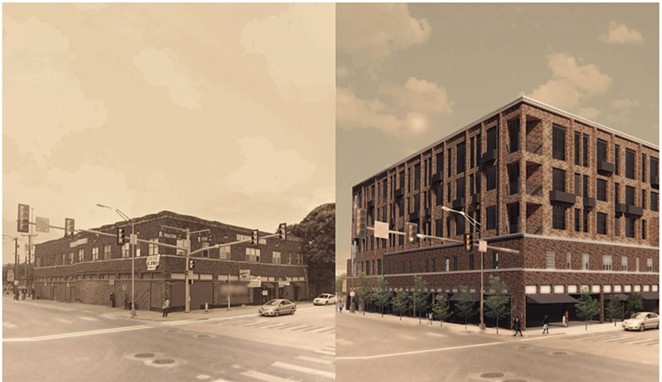 VIA plans to rehabilitate the Scobey industrial complex— a short walk north from the Rich Book building, on Medina Street—into a mixed-use development of residential, retail and office space.

Despite the area’s troubles, Adelman said he has good feelings about its future.

“I continue to be optimistic that the central city will continue to grow and prosper. I will say Covid tends to be a bit of a setback to the urban momentum… And so I do have concerns, but it’s too early for anybody to full bake what they believe is going to happen,” he said. “But as my nature is, I’m inherently bullish and optimistic. And so we’re trying.”