Developer Walks Back Plan for Apartment Complex Next to Mission Concepción 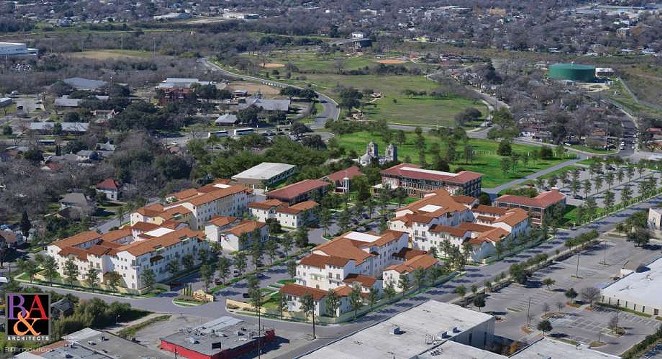 A plan to turn the abandoned St. John's Seminary into an apartment complex that would border Mission Concepción could finally get off the ground Wednesday if the Historic and Design Review Commission gives the project a green light.

In 2015, the Archdiocese of San Antonio requested proposals to redevelop the property, which is abandoned and in disrepair and used by homeless people for shelter. The Archdiocese chose a proposal from the 210 Development Group to renovate the property and turn it into an apartment complex.

But those plans hit a speed bump because the 210 Development Group wanted to build higher than zoning rules allow for the area. Because the property is right next to Mission Concepción, new construction is limited to just three stories in order to protect the integrity of the mission because it is a World Heritage site. However, the developer has walked back those plans.

In July, the proposal was up for consideration for approval but was pulled at the last minute. Documents filed with the City show that the 210 Development Group resubmitted the proposal and this time it complies with height requirements. 210 Development Group spokeswoman Holly Thoman tells the San Antonio Express News that the proposal now complies with all local ordinances. "We are looking forward to receiving approval, as recommended by HDRC staff, and are proud to be working with the Archdiocese of San Antonio to revitalize these historic and rapidly deteriorating structures."

If the plan's approved, the 210 Development Group will demolish eight buildings on the St. John's Seminary property, along with two single family homes, both abandoned, that are adjacent to it. The developer will renovate portions of St. John's Seminary, including St. Mary's Hall, Drossaerts Hall and Margil Hall. The company also plans to build seven new structures.

The Alliance for San Antonio Missions, a grassroots group comprised of neighborhood association members and residents, has been critical of the development, arguing that multi-story, high-density apartment complexes have no place next to the mission. The group has been monitoring development proposals in the area, which has seen an increased interest from developers in the last few years. The Historic and Design Review Commission takes up the proposal tomorrow at 3 p.m. at the Development and Business Services Center at 1901 S. Alamo.