Diana Krall Shows Off Her Softer, Sadder Side 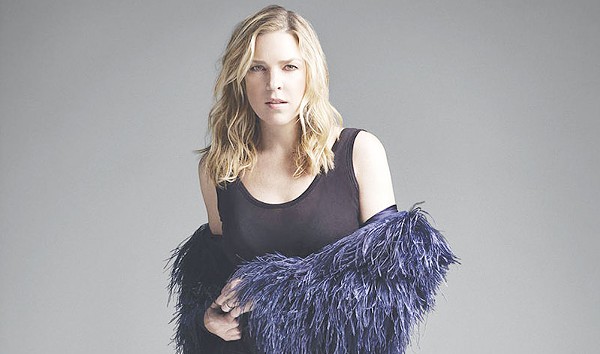 Released in February, Diana Krall's Wallflower takes its name from a Dylan tune, first recorded by the bard with San Anto's sideburned hero on 1971's Doug Sahm and Band. It falls into the category of Dylan tunes that rattle properly in the vocal chords of other artists — "Subterranean Homesick Blues" defines the other category of Dylan compositions and I pity the coffee house singers who give it a spin.

On Krall's take, "Wallflower" is a bleak three minutes. Over funeral strings and blocks of soft piano, she wanders in the ennui, in the romantic in-between. "Wallflower, Wallflower, won't you dance with me" Krall asks. "I'm sad and lonely, too." On Krall's eleventh record, she uses this loneliness like the saddest of all phone camera filters, swaddling every note in a cold, soft light. She's a wallflower in the cocktail party sense of the word, taking the compositions of admired artists into the corner to sip a non-alcoholic drink and bum them out.

That's not to say that this is a one-dimensional collection of covers. On "California Dreamin,'" you can hear both the autumnal sadness of Mama Cass and Tupac's summer-all-the-time shimmer. Bryan Adams and Blake Mills join in for a couple duets, adding a little warmth to the record's melancholy. I'm gonna pretend that the Michael Bublé cut isn't on here, but you've got to appeal to the coffee counter crowd somehow.

At the piano and on the microphone, Krall is known as a jazz artist. Though here, and in many past forays, she deals exclusively with the pop songbook. Like many categorizations in music, it doesn't matter. Like Nat King Cole or Nina Simone, Krall is fluid between these forms, finding multi-platinum adornment wherever she goes. In her 20-odd years of performance, Krall's piano work has been versed in blues, the rhythms of New Orleans and the block structures of master Dave Brubeck. Her bright contralto is search engine optimized for the word "timeless." She has this great conversational knack between her instruments, riffing casually on the melodies she brings up on the microphone.

This slow-core pop record might be the bleakest we've seen Krall during her tenure at the top of the jazz charts. But, as ticket and record sales prove, there's still a great audience that wants to dance. We're sad and lonely, too.