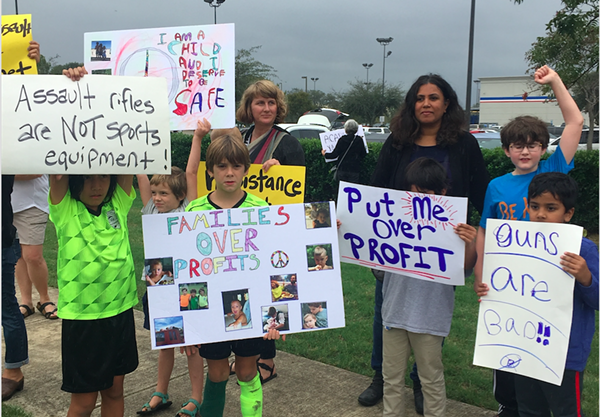 One of the country's largest sports equipment chains, Dick's Sporting Goods, made headlines Wednesday with an unexpected announcement: The company will no longer sell assault-style rifles or high-capacity magazines, and it will cease to sell any gun to anyone under age 21, regardless of local laws. According to company officials, these changes were a direct response to the deadly February 14 shooting in Parkland, Florida, where a 19-year-old man used a AR-15 assault weapon to gun down 17 students and staffers.

“When we saw what happened in Parkland, we were so disturbed and upset,” said Dick's CEO Edward Stack, in an interview with the New York Times. “We love these kids and their rallying cry, ‘enough is enough.’ It got to us.”

After searching through sale records, Stack found that the Florida gunman Nikolas Cruz had previously purchased a gun from Dick's. While it wasn't the same model used in the deadly shooting, it didn't matter to Stack.

This immediate reaction bears little resemblance to how Academy Sports and Outdoors responded to learning one of its San Antonio retailers had sold multiple weapons to the Sutherland Springs gunman, Devin Kelley. In fact, Academy found they had sold Kelley a Ruger AR-556 — the exact model used in the First Baptist Church massacre.

Instead of dropping assault rifle sales after the shooting, Academy began advertising a new “hot deal” online: Discounted boxes of the very bullets Kelley used in his attack.

In response, San Antonians held signs outside an Academy store reading “Families over profit" and "Assault rifles are NOT sports equipment.” One young boy waved a more straightforward handmade sign: “Guns are bad.”

The Texas-based company currently sells more than one hundred different semi-automatic weapons on its online store.

Academy officials said that Kelley had passed their background check — that they had done nothing wrong. Which is true: The U.S. Air Force admitted it had failed to submit Kelley's domestic assault record into the system gun stores use to run background checks. But, in person and online, advocates demanded Academy stop selling assault rifles — not because they were breaking any laws, but because it was the right thing to do.

Since the shooting, at least one family of a Sutherland Springs victim has sued Academy, arguing that the company broke the law when it sold Kelley a gun, because he listed an address in Colorado Springs. According to law, the lawsuit alleges, the rifle should have been shipped to his residence in Colorado — not handed over in Texas.

The company did not immediately respond to the Current's request for comment Wednesday.

Dick's is a minority sporting goods store in San Antonio — its three locations are far out-populated by the nine Academy stores spread across the city. That means that regardless of Dick's decision, San Antonians will still have an incredibly easy time finding a store stocked with military-grade weapons.