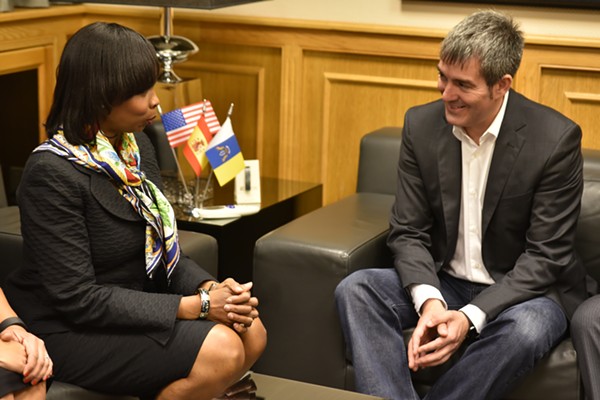 The City of San Antonio spent over $60,000 on a trade and cultural exchange trip to Spain for elected officials and City staff, and in the process may have violated the Texas Open Meetings Act.

Thirty-eight people went on the trip, which started on May 21 and ended on May 28 and was sponsored by the San Antonio Hispanic Chamber of Commerce. The chamber takes a trip to Spain annually in addition to other foreign excursions to promote trade and investment.

The purpose of the trip was to build economic development opportunities and civic relationships, and to promote the city’s Tricentennial Celebration in 2018 to Spanish officials and potential tourists, according to the Hispanic Chamber and City officials.

“The longer term benefit is obviously investment in San Antonio by Spanish companies,” said Ramiro Cavazos, president of the Hispanic Chamber. There are currently six Spanish-owned companies operating in San Antonio, according to the City’s Economic Development Department.

Because six people with votes on the council went on the trip, that meant a quorum — the minimum number of people necessary to conduct City business and make decisions — was reached. A post on the City’s website giving notice of the trip acknowledged this. That notice stated that a “Quorum of the City Council of San Antonio is anticipated to participate in a delegation” to Spain, but that “No official City action will be taken during this mission.”

But even if no official votes or decisions were made, Taylor and the five council members still may have run afoul of the Texas Open Meetings Act, which requires that meetings with a quorum be held in a location accessible to the public.

Gary Lawson, a Dallas-area attorney with experience in open meetings law, said that there are exceptions to the law. If a quorum happens to be present at a conference, for example, but there’s no substantial discussion of city business, then there is no violation. Still, problems can arise when a quorum talks about issues within the purview of City Council without giving proper notice or access to the public.

“Deliberation cannot take place outside of a duly called, properly noticed open meeting. So if a quorum of them came from a meeting with, let’s say their equivalents [in Spain] … and then they went back to their hotel and said ‘Let’s talk about what we can do to strengthen the ties between our city and city X,’ that might be wrong,” Lawson said.

Discussing how to improve the city “in a very vague or general way” probably wouldn’t implicate the act, according to Lawson, but deliberations about business opportunities, use of public funds, cultivating inter-city relationships and other topics might.

“If they, in fact, while they were there talked about what the city should do about promoting business, if they said ‘Look when we go back let’s think about using some city dollars to ... do something as a governmental governmental entity,’ ... there would be a couple of issues,” Lawson said.

Councilman Roberto Treviño said that he and his council colleagues did not violate the act because they did not deliberate over “any … city business whatsoever.” He said they were quite cognizant of the fact that there was a quorum present.

“We were careful not to have anything to vote on. We were simply there on a trade mission, a cultural mission,” Treviño said. “I wouldn’t call it City business. … We did understand that we were in a situation that we needed to be mindful as to not deliberate or do anything that was inappropriately excluding the community.”

The council members and mayor discussed opportunities surrounding the Tricentennial Celebration, including Spanish companies sponsoring the event and promoting tourism. They also discussed strategies for civic engagement with the mayor of Madrid, and Santa Cruz de Tenerife’s successful streetcar system with the president of the Canary Islands council.

Councilman Ray Lopez said that the council members were concerned about the presence of a quorum, but none of them bowed out of the trip.

“If I could have waved a wand and told half of us not to go, I probably would have done it,” Lopez said.

Still, Lopez didn’t think that anything illegal transpired on the trip. Acting City Attorney Martha Sepeda echoed that opinion in a written statement to the San Antonio Current:


“The delegation of City Council traveled on a diplomatic mission clearly allowed under state law for ceremonial, informal and social activities. No votes or official business was conducted and certainly no laws were violated."

The trip was important, Treviño insisted, because it strengthened relationships with two sister cities and bolstered San Antonio’s reputation as an “open” city.

“Forming partnerships that can help us create better collaborations, whether they’re in trade, international business, or even cultural exchange ... we think is very important in the city,” Treviño said. “This was a very meaningful trip in that it helps all of us learn more about the roots of the city, the kind of people who want to help the city.”

Brianna Dimas, a spokesperson for the Hispanic Chamber, explained that blocks of rooms and flights were purchased at lower rates before most people committed to the trip, and the cheaper prices were still honored once those slots were filled after the early deadline.

Each council member paid for the trip out of their individual district budget, money annually allocated by the City for members to use at their discretion, including for travel. Each district’s annual budget it $400,923.

Mayor Taylor has a similar budget of $423,273, but did not use those funds for this trip. The City paid for her trip out of a separate pot of money earmarked for “international initiatives in support of San Antonio’s trade and investment strategy,” Taylor’s spokesperson Leslie Garza said.

Lopez understands taxpayer concerns about the cost of the trip. He’s gone on several, including to China and Japan. He said they yield dividends, even if those benefits aren’t as immediately apparent as fixing potholes or picking up stray animals.

“That’s the basic blocking and tackling that we do, but there’s the other piece of it we have to also do and that’s ... create an interest in San Antonio so we can get foreign direct investment, job investment, business investment,” Lopez said. “I have become incredibly convinced that it’s a very, very small investment we make on these trade missions that indeed yield us jobs and investment and an international profile. So I think it is money very well spent.”