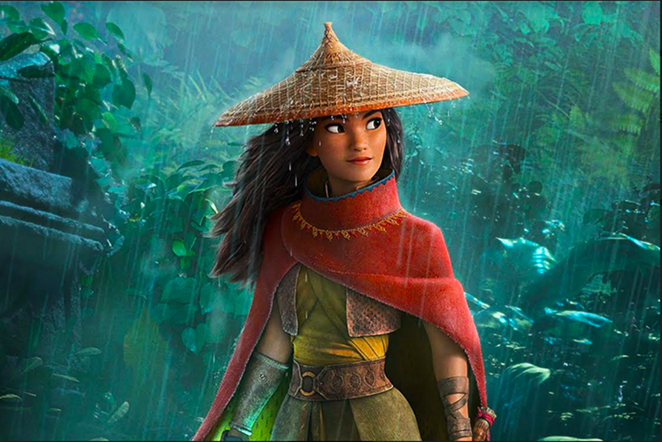 Ever since San Antonio native, animator and filmmaker Paul Briggs was a teenager, he wanted to work for Walt Disney Animation Studios. Briggs, who attended Alamo Heights High School, got that opportunity in the late 1990s when he landed a position in the visual effects department at the studio and began contributing to animated projects including Hercules and Mulan.

Briggs worked his way up to storyboard artist on films, including Bolt, Tangled and Winnie the Pooh, then to head-of-story on Frozen and Big Hero 6. He has also lent his voice to Disney characters such as Yama in Big Hero 6 and the giant, growling snow monster Marshmallow in the Frozen franchise.

In Raya and the Last Dragon, Briggs takes on the role of co-director alongside John Ripa, who also held the title. The directors of the film are Don Hall (Big Hero 6) and Carlos López Estrada (Blindspotting). Briggs calls their directing team the “Power of Four.”

During an interview with the Current, Briggs, 46, talked about what initially got him interested in animation and what it is about Disney movies that make them so special. He also explained how making Raya and the Last Dragon reminded him of the time he spent living in San Antonio.

Do you get a chance to come back to San Antonio often?

I try to get out there as much as I can. My dad still lives there. Most of my sisters live up in New Braunfels now. I still love San Antonio so much. There’s something really special about it. When we were traveling through Southeast Asia to do research for this film, I kept thinking about San Antonio. There was so much history and legacy in the places we went like Vietnam, Cambodia, Laos, Thailand and Indonesia. Like San Antonio, those places have such a deep-rooted culture. It really made me appreciate San Antonio so much more.

Well, we definitely wouldn’t mind if you pitched San Antonio as the setting for the next Disney movie.

What interested you at an early age in animation?

I remember once my mom and I were at the Walden Books at North Star Mall, and she bought me a great book called The Illusion of Life about Disney animators [Frank Thomas and Ollie Johnson]. I knew right away that animation is what I wanted to do. But it’s funny because when I went to college at a fine art school in Kansas City, I was doing a lot more ceramics and sculpture. It was my instructor there who pushed me to submit to Disney.

What is it about Disney’s animated films that make them so special?

One of the things that Disney films always have is heart. That’s what always spoke to me. Also, there’s always been some really heavy stuff they deal with in Disney films. I’ve always admired that. For example, in Dumbo with the sequence between Dumbo and his mother when they’re saying goodbye for the last time was a really heavy emotional moment that is handled so beautifully with just a song. I think about that a lot. Frozen is about fear and love and siblings. Big Hero 6 is about loss and grief. In Raya and the Last Dragon, there’s a really deep and emotional theme about how to bring people together. That’s a really heavy thing that I think is very important right now. It’s something that resonates with what’s going on in the world, especially in our country.

Talk about what it was like working on a movie during the pandemic.

A huge portion of this film was made from home during the pandemic. I remember it was like, “Yeah, we’re not going to be able to do this at the studio.” I remember all these animators walking out with their computers. It was like, “OK, we still have to keep making this movie!” With four [directors], it was actually pretty amazing. We called it the “Power of Four” because we were all very much in line together. It was really four of us speaking with one voice — over Zoom. It was a great working relationship.

As a director for Disney, is the big goal to get to direct your very own feature? Is that what you’re working toward at the end of the day?

Yeah, you have to have a story you want to tell. What do I want to say? What can I draw from my own life? These movies take time, so there has to be a really deep, passionate message that you want to say to the world.