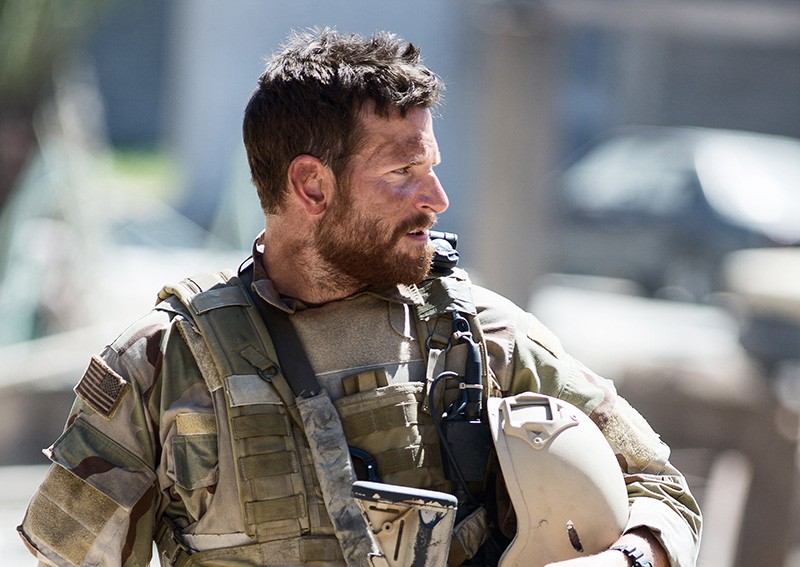 Navy SEAL Chris Kyle was the most lethal sniper in American military history. He served four tours of duty in the Middle East, had more than 160 confirmed kills, was called "Legend" by his fellow soldiers, and was an emotionally distant husband and father while actively enlisted. Kyle's story is inherently fascinating. Clint Eastwood's telling of it in American Sniper is not.

Even with the above and more to work with, Eastwood's final product registers as a mundane bore that has the life sucked out of it from the get-go. The first deflating moment comes when we see Chris (Bradley Cooper) on a lookout post in Fallujah targeting a woman and child who are potentially carrying explosive devices. Before the moment pays off, there's a flashback to scenes of him learning how to shoot, bull riding, his girlfriend cheating on him, bonding with his brother, Navy SEAL training that offers nothing new and meeting his future wife Taya (Sienna Miller). On their wedding day, his unit learns they're going to the Middle East. Only then, roughly a half hour into the film, do we return to Chris on the lookout targeting the woman and child.

Writer Jason Hall, working from Kyle's book American Sniper: The Autobiography of the Most Lethal Sniper in U.S. Military History, seems to be marking off a checklist of war movie clichés. For the opening half hour to be effective, all those details need to collectively feed into Kyle at the lookout, but the segment is so crammed with unnecessary details that it's too scattered for its own good. As a result, when we get back to the lookout we've forgotten about it, and all the suspense is lost.

Remember: Just because it's factual doesn't mean it should be in the movie. It is Eastwood and Hall's duty to provide an entertaining story, not worry about getting things right. If Taya Kyle wanted a more fact-based biographical film that would be accurate, she should've sold the story rights to a documentarian.

More alarmingly, Chris' most interesting trait—his shooting ability—is given precious little insight. One would think a film about the deadliest sniper in U.S. history would take us inside his head to see how he views his targets. Not from the scope on his rifle, but from the thought process he goes through when spotting a target, focusing on the subject and deciding to fire. But Chris is kept at a distance and Eastwood misses the chance to use the medium of film effectively to tell Chris' story.

Part of this could be because Chris kept himself at a distance. Between tours he returned home to Taya and their children but wasn't mentally and emotionally there, which provides a brief glimpse of his home life but is over too quickly to really register. His need to focus and not quit and be in the action is well documented, so none of the content of him at home in Texas feels necessary. If you're going to make a movie that glorifies a great soldier, do it. Don't waste time with him as a terrible father and husband.

And when you are glorifying him as a soldier, do so with focus and style. Eastwood saps the inherent curiosity from Kyle's exploits by using muted colors and allowing scenes to run far longer than they should. Although there's a rival sniper named Mustafa (Sammy Sheik) that Chris is trying to catch (the rivalry between Chris and Mustafa would've been an interesting subplot to develop more), the story is episodic and lacks a clear narrative arc. "The Exploits of an American Sniper" might have made for a nice television series in which Chris goes on one mission after the next, but it doesn't play well in a 134-minute movie.

Clint Eastwood was handed two prime properties in 2014 (remember Jersey Boys? Didn't think so.) and the results have been underwhelming. The truth is there aren't many directors we'd rather have working on American Sniper. They can't all be Oscar winners, right?

Potential spoiler: Chris Kyle was shot and killed in Texas in February of 2013 by an American veteran he was trying to help.