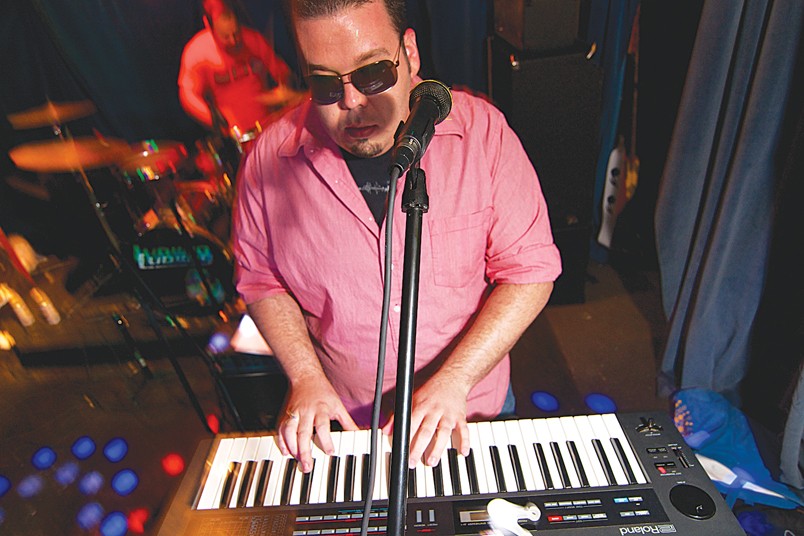 Disco Wasteland’s bass player and vocalist Michael Arriaza is a fairly unassuming, nicely groomed guy until he puts on his bass and gets behind the mic. Then he’s a collar-popped, flinger of sweat who isn’t just unafraid to play lead, but insists on it. Some may remember him from his days drumming for Love Hate Affair, where he says he was let go because of his wildman ways. At Wasteland’s fifth gig last Friday, group members spoke of trouble finding time to practice, and yet the trio (Arriaza, drummer Anthony Trinidad, and keyboardist Jeremy Rhodes) hacked their way through a dance-rock set like three machete-weilding guerrillas, albeit in a visually strange and sometimes tripped-up fashion.

While Arriaza was trying to be the love child of The Hives’ “Howlin’” Pelle Almqvist and Dr. Matt Destruction, Rhodes was his negative ion, doing the indoor-sunglasses thing, non-committedly tapping keyboard lines, and keeping an air of quiet smugness on lock. Between them was Trinidad, looking a little overwhelmed trying to keep up with the high-speed, high-syncopation rhythms he laid out for himself. His subtle smirk betrayed that, yeah, there are probably a few too many time changes in these songs, but also that the band has to look a little ridiculous to some people.

In presence, the group recalled the early Who, with Arriaza evoking the absurd theatrics of Pete Townshend and Rhodes impersonating the collected John Entwistle.

But sonically, Disco Wasteland drew from well beyond classic rock. Rhodes (formerly of dance-rock band Kick It!) stuck to tones like warped organs and clavinets, giving many songs the campy darkness of the Doors. Rhodes’ keys made the closing suite of “Alucard” and “Zombie Surf” feel like medieval metal minus the metal.

Like all great camp-rock bands, Disco Wasteland played a tune named after themselves. The mini-epic featured Arriaza screaming through the chorus, with the band pounding away until the track fell apart prematurely. It looked intentional, but who knows? That’s what makes Disco great. They make dancy, wild rock ’n’ roll feel like drowning in ankle deep water: completely serious, but also kind of ridiculous.

On “Bug Eyes,” Arriaza plucked away at a lengthy bass solo, while shuffling his feet Dave Matthews-style. Then he leaned back reveling in his own awesomeness. With his face to the ceiling, he struck a god-like pose.

“Everyone having a good time?!” he asked the crowd after the tune. He got a few vibrant cheers (the crowd was thin), to which he responded, “Alright, that’s believable.”