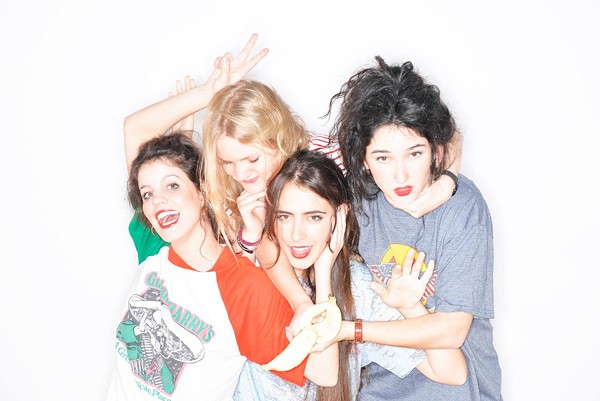 Later, Loafers' 4:55pm set at Zenfit, had a kind of surf-punk thing going on with an impressive level of loud – like they can tap into a different frequency of loudness. They are never not fast and loud, which is fantastic. They seem not to have a low setting. They enjoyability here is in the fastness and loudness, the strumming, the catchiness. It's simple fun. I would call it unrelenting but this isn't showing enough technical prowess to fit that description. While this isn't meant to be a slam, technical prowess isn't what they seem to be going for here. They're not trying to impress me with how many chords they can play or how many arcs they can create; they're just out there being big and fun, and it works.


Up at El Sapo on Manor Road, the first day of the Music for Listeners three days of shows was underway and closed huge with Hinds' 6pm set. These young women from Spain played this garage restaurant show last SXSW and loved playing it so much they asked to play it again this year, and at the end of their set, they said they want to play next year, too.

This says a lot about this increasingly big deal quartet whose sound fits the breeziness that the MFL shows have always embodied, even though their big deal-ness means it was impossible to see them and that restaurant was more packed than it had ever been in the two years of these shows being here in this venue's current iteration.

If one wanted to dance — or sway, even — it was possible, for this band's music seems to make things possible, but truly a task. Hinds has a kind of swing to them, like a rock version of swing. This is a good, recognizable pocket where they flourish. The fun they convey in the music, or even in the chanting for the increasingly infamous El Sapo frozen margarita (which I can certainly attest to, having partaken of quite a few and getting increasingly and pleasantly throwed the day before), proved that Hinds is the band to watch and watch in the moment, every moment.

They sounded fantastic and it's understandable why the hype is real around them. Current photographer, Jaime Monzon, had a gig of his own to play at the time, and was unable to shoot their set, unfortunately. However,  they're playing an official gig today (Friday) at 5pm at the Radio Day Stage in the Austin Convention Center. I totally don't mind that I have to see and hear them again so we can get the shots necessary to better convey their greatness, though nothing could convey their swing.


Back at Zenfit, The Red Legs played their only SouthBy set at 7:30pm. It was a calm atmosphere, fitting the chillness of the venue as opposed to the clusterfuck that is SXSW proper. It devours souls and these guys ain't havin' it. They had no set list, they're coming together in places, but good God are they heavy.

What initially seems like a larger vehicle for Nick Long to wail eventually reveals a muscularity that everyone in this quintet has. There's blues all over this; it's in its veins. It's like the soundtrack to the Aristotelian ideal of Endurance. It may be why there are two drummers here, as if Endurance and Time Lord physiology need a musical analogue. This particular drumming forges ahead rather than goes for the razzle dazzle. Yet they still, everyone involved, has a degree of legit-ness that cannot be denied.

Chairlift played at YouTube Music at the Coppertank, a place with thankfully great air conditioning considering the carefully curated close quarters (I finally got into that one building that always has that line around the block! Six SXSWs and I finally get to see what's inside the building … it's another bar, but the drinks were free, so yay?) YouTube has a separate app for music, appropriately titled YouTube Music. This is not their separate pay app, YouTube Red, that can play over the other apps on one's phone. No, this one plays music continuously and creates playlists and other things an algorithm will do to supplant the radio. It also looks cool when playing on multiple touchscreen televisions, but I doubt I could recreate such an experience on my already obsolete but still pretty cool (never offend your phone, it hears these things and that's when they start to act up on you) Motorola Nexus 6.


Chairlift's 9:30pm set reminds me why this group is a secret big deal. Many SouthBys ago, steampunk big band leader Darcy James Argue told me to check them out. He knows the saxophonist, because weirdo awesome steampunk big band leaders based in Brooklyn would know the saxophonist for the very legit synthpop act. They're legit because this is a synthpop sound with a bit more musicality to it. They have a cool little draw that they've been building for a few years now to continually explore their ever-present depth. They can explore the breakdowns in their songs because they're kind of equipped to do so, unlike most other bands in this genre, or even composed like this. They're new material from earlier this year is just as grooving as their past releases and the crowd of music badgeholders responded accordingly. They can make turns that sound almost like Busta Rhymes' "Lay Your Hands Where My Eyes Can See." Then make bridges that evoke "damn" upon reflex. They're the band that may make you dance more than any other time all day, though free old fashioneds, sponsored by the YouTube Music app, help. 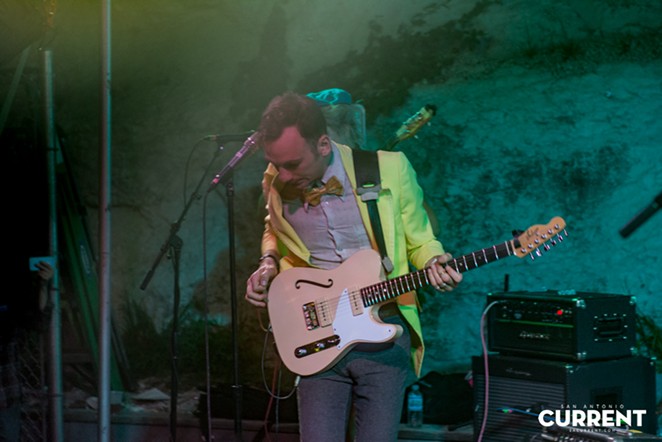 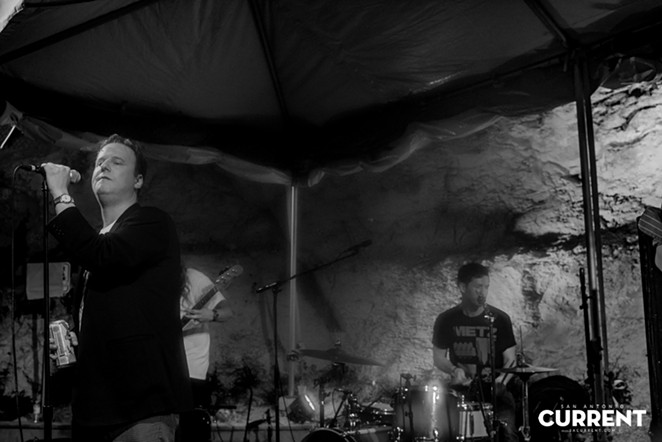