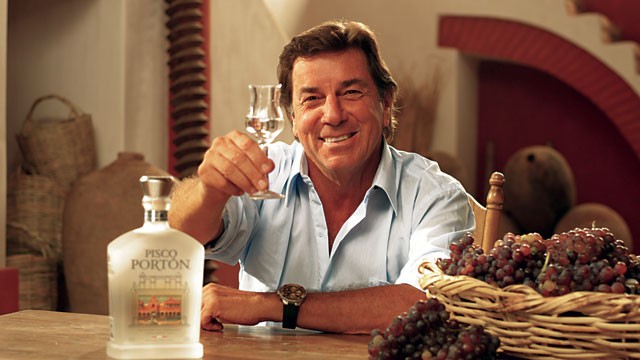 "Do this for me," he said. "When making your Sunday Bloody Mary, do one in vodka and another in pisco — then let me know what you think." Seemed innocent enough.

The request came from Johnny Schuler. "My daughter calls me 'the Santa Claus of pisco,'" said the Peruvian-born entrepreneur. His label, Pisco Portón, was back at the San Antonio Cocktail Conference, and it became clear to me during the course of an hour-long interview that he might justifiably add apostle, cheerleader, even evangelist, to the Santa claim. Perhaps more than anyone, Schuler can take credit for elevating a once relatively minor national liquor into the international spotlight.

Schuler, who began his professional career with hospitality and restaurant studies both at Cornell and in Switzerland, came to the drink of his native country with more than a bit of reluctance. "I first opened a luxury French restaurant in Lima … started a hotel school there in the late '80s … began to collect wines and formed a wine club ... and also I'm a [cocktail] drinker. I love the classics such as Negronis. But in Peru it was always the automatic pisco sour — and they would use the cheap stuff. Not something you would like to drink," he says.

The turnaround came when a friend twisted his arm to help organize a pisco competition. It started out as a "bottoms-up" tasting, he says; "I had to convince them to spit. But by the fifth sample something opened up for me. There were flowers, no burn in the throat … it hit me in the face that I'd lived most of my life in Peru and had no idea this [good stuff] was going on. It changed my life. I tried to introduce it to friends used to fine Cognac," he says. There was resistance.

So Schuler immersed himself in pisco with the kind of zeal he was now conveying in the lobby of the Gunter Hotel. "I went every weekend to Ica [south of Lima, it's the center of Peruvian pisco production — yes, pisco is also produced in Chile, but we won't get into that rivalry here] and became a pro-bono ambassador for 25 years." In time he collected 2500 labels, each distinctive.

Schuler explained that pisco is the product of eight different (not especially distinguished) grapes, distilled to proof. Three types are made: puros from only one grape variety; acholados that are a blend either of grapes fermented together, wines, or distillates of individual varieties; and mosto verde distilled from partially fermented juice.

Now also a master distiller, Schuler makes a mosto verde at Portón, a company he owns along with a Texas oilman. Housed in "the oldest working distillery in the Americas" (it dates from 1684), Portón operates much as it did at the beginning — at least in the sense that everything is gravity fed. And of that mosto verde he rhapsodizes, "it's melted silver from the Andes [with an] aromatic structure of chocolate, fruit, rose, jasmine … but the magic is in the mouth. It's like drinking honey."

Which somewhat abruptly brings us back to the Battle of the Bloodies. In order to truly test the spirits, I used a simple recipe with tomato juice, both lime and lemon juices, Cholula hot sauce, Worcestershire, a bit of horseradish and just a sprinkle of celery seed. And so, Señor Schuler, the result? I'd stick to vodka — but only because the pisco deserves better bedfellows. Here's a recipe, called The Panamericano, I especially like:
1 oz (or slightly more) Pisco Portón
1 oz Dolin Blanc Vermouth
1 oz (or a little less) Cocchi Americano
1 swath of orange peel
Stir in a mixing glass with ice, strain into a rocks glass with fresh ice, twist the orange peel and drop it in.

Alternatively, you could go to Pearl and taste the pisco sours at both Nao and Arcade Midtown Kitchen — a Showdown of the Sours in the making.