Divine Intervention: What Do Pope Francis and Viggo Mortensen Have in Common?' 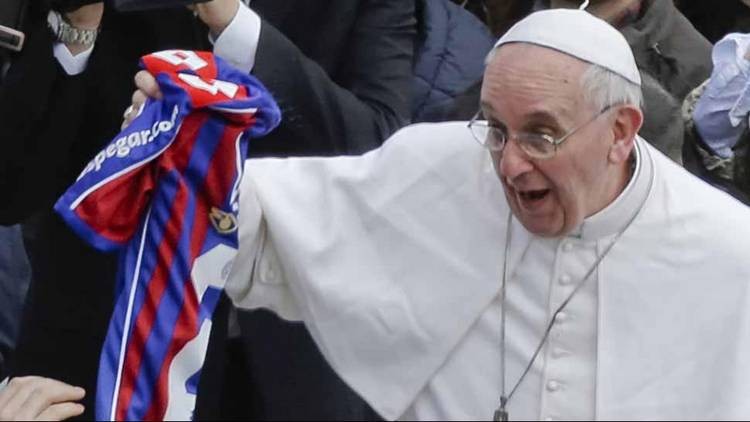 "¿San Lorenzo is the champion?" was the first thing Pope Francis reportedly said upon getting up this morning, according to Argentina's press. "What a joy!"

San Lorenzo de Almagro, one of the five "big" teams in Argentina and Pope Francis' favorite, won the local championship on Sunday. In Argentina, it was a well-known fact that the Pope was a San Lorenzo fan (the team was founded by a priest), but shortly after being named Pope he poked fun at some Boca Juniors fans at St. Peters square by reminding them of the score of their last match (3-0 for San Lorenzo).

It wasn't the first time the Pope expressed his sympathies for the Buenos Aires team.

In Argentina, team presidents are elected by fans who pay a monthly membership. Pope Francis (who became Buenos Aires' Archbishop in 1998 and was named Cardinal in 2001) is a lifelong fan and has been an official San Lorenzo club member since 2008.

"His payment is there, bang on time, every month," Marcelo Tinelli, a major TV star and the team's vicepresident, told Fox Sports. "He pays his dues religiously. It's paid through an automatic debit."

Until the former Cardinal Bergoglio became Pope, the world's most famous San Lorenzo fan was actor Viggo Mortensen, who got in trouble at an airport for going nuts while celebrating a goal by San Lorenzo's "Pipi" Romagnoli.

But what about the "divine intervention"? Go to the next page to see the key moment of the match that crowned San Lorenzo as Argentina's best.

San Lorenzo was visiting Velez Sarsfield, and the 0-0 score was all San Lorenzo needed to become the champion. But in the game's last minute, a pointblank shot by Vélez's Agustín Allione was miraculously saved by San Lorenzo's goalie Sebastián Torrico. You have to see it to believe it.

Narrator Marcelo Araújo ends the clip by saying "No apolillás!" (a lunfardo slang for "you won't be able to sleep") and saying even himself or his reporters could've scored that goal.

In the end, San Lorenzo was able to maintain the 0-0 score and the fans were able to celebrate. Pope Francis and Viggo Mortensen (hopefully nowhere near an airport) were there in spirit.