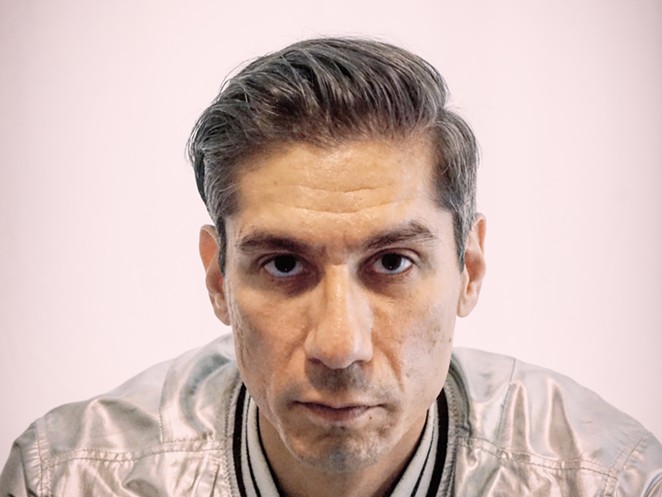 Composer Nathan Felix is one of the most ambitious, interesting and engaging creatives in San Antonio.

On the heels of his first ever film installation — a haunting, avant-garde rumination on social media and identity entitled [nothing], which showed at Damas Gallery in October — Felix is back to what he does best: bringing a punk-inspired DIY ethos to classical music.

On Thursday, November 7, Felix will present a new series of interrelated, one-act headphone operettas at the McNay Art Museum. The pieces were written specifically for the museum’s current exhibition "Picasso to Hockney: Modern Art on Stage," which collects more than 120 objects by an impressive array of artists including the two titular masters, from the Tobin Collection of Theatre Arts. The exhibit is built around the thesis that “performance design has increasingly become an essential part of contemporary artists’ creative practice.”

Felix, 38, relocated to San Antonio from Austin in 2017. Since founding his guerilla choir and shapeshifting musical ensemble From Those Who Follow the Echoes in 2016, he's been everywhere around town. He's composed and produced headphone operas, pieces for multiple pianos, and other works that flex his compositional chops and bring classical music forms new life, often presenting them in unconventional spaces.

That forward-thinking work has earned him international opportunities as well, recently taking him as far as Australia and Europe. All of this from a guy who started out playing in punk bands in Austin in the early aughts before working with The Noise Revival Orchestra, a kind of bridge between his punk past and his classical present.

Not bad for someone with no formal training, who taught himself to love and then to create classical music.

“No joke, I googled ‘How to write an opera’ and ‘How long does it take to write an opera,’” Nathan said. “I found some forums that basically said, if you are searching these questions then stop right now, don’t write an opera and do something else with your life. I obviously didn’t listen.”

Since he’d successfully taught himself how to write a symphony before, Felix figured an opera couldn’t be that hard.

“Call me lazy, but staying true to a traditional form doesn’t interest me anyway,” he said, “I’m interested in music, story and feelings, which are all part of an opera.” 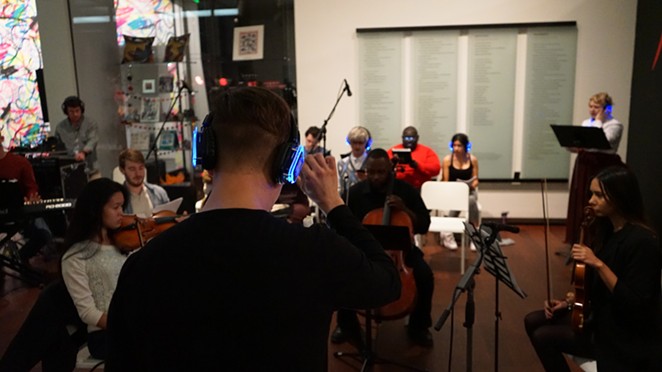 With the number of successful operas now under his belt, it seems his DIY approach is working out just fine.

Felix said the now project holds special significance for him.

“The artists and eras in this exhibition are some of my all time favorites, and I’m familiar with their lives outside of their art, which I knew I could turn into an opera,” he said.

Felix described the inspiration behind the operettas: “I’m pretty big into both the pop art movement and the surrealist movement, so that was the perfect starting point for me. For months, I toyed with various ways to meld these eras with a cohesive narrative. I remember reading that Hockney regretted having never met Picasso, and that made me wonder what that conversation would be like. That spark helped me settle on creating poetic and allegorical conversation pieces between Hockney and Picasso, as well as other central figures that are also represented in the exhibition.”

According to Felix, the pieces’ feature “an underlying theme of fragility that the listener will feel in the music.” This sense of fragility is an autobiographical move for the composer, who admitted he has a tendency to hide in his own work.

“I have such a strong connection to the characters and eras, I chose this theme of fragility to both hide parts of my life in it and to highlight lesser known characteristics in each character."

“Because they are fictional conversations,” he added, “I felt I had the leeway to get away with this, but I still did my research to make sure I stayed true to each character.”

Attendees of this one-off show can also expect to meet Igor Stravinsky, Coco Chanel and Gertrude Stein in these fictionalized forms.

Each operetta, as such, is both a vignette that can stand on its own and a part of a larger whole. True to Felix’s growing reputation for going over the top, the performance will feature 20 musicians and 7 operatic soloists, plus a dancer and a cast of models. Richard Castillo of the Lonestar Philharmonic will conduct.