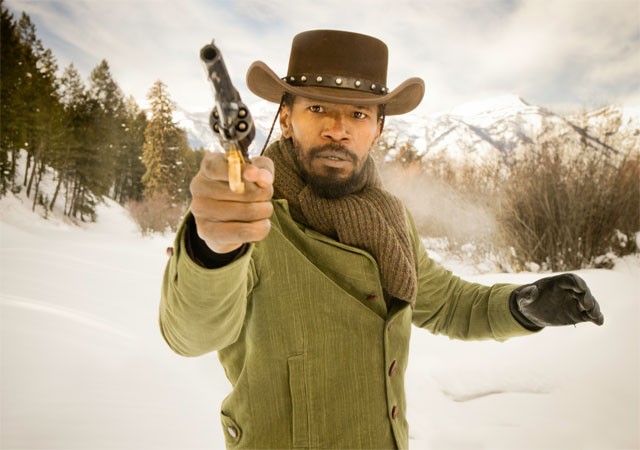 In Django Unchained, bounty hunter Dr. King Schultz (Christoph Waltz) readily expresses his disgust for slavery. But after killing Django's (Jamie Foxx) former owner he informs his new partner that he hasn't yet won his freedom. “For the time being, I'm going to make this slavery rigamarole work to my advantage,” he admits. “Having said that, I feel guilty.”

To some, this exchange could be viewed as Quentin Tarantino's version of an artistic disclaimer. That would presume, of course, that the iconoclastic director had second thoughts about his mashup approach to racial oppression. Given the giddy irreverence on display in this cinematic pastiche of Western tropes, that conclusion seems highly doubtful. After all, this is the same man who concocted a squad of Nazi-scalping Jewish-American soldiers to machine-gun to death Adolf Hitler.

While Django Unchained doesn't go quite as far to rewrite America's wretched history of slavery, it does allow its main character — a former slave turned gunfighter — to mow down a small army of sneering bigots, rescue his gorgeous wife, then explosively demolish an iconic symbol of the Antebellum South: the plantation mansion. When asked how he likes the bounty hunting business, Django replies: “Kill white people and get paid for it? What's not to like?”

It's easy — almost too easy — to get caught up in Tarantino's incendiary remix of Spaghetti Western aesthetics, exploitation film tropes, and the profound injustices of American racism. More than just an abstract piece of history that is dutifully taught (some might say white-washed) in junior high, Django Unchained rubs our noses in the ugliness and brutality of slavery, making us feel both the personal costs and deep-felt rage that fuel Django’s need for revenge. Beyond the frenzied whippings and garish shootings, we are forced to watch as “Mandingo” slaves beat each other to death for the amusement of whites and then, when they can no longer fight, get savagely torn apart by dogs. Reading one critic's comparison of Django Unchained to a bloodier version of Blazing Saddles seems wildly off the mark. Sure, there’s a hilarious vignette involving hooded Klansmen who can’t properly see out of their eye-holes (it's probably the funniest scene Tarantino has ever written), but nothing in Mel Brook’s canon approaches the pungent sensationalism, righteous desire to provoke, and sadistic underpinnings on display here.

In past reviews I have criticized Clint Eastwood's cinematic approach to real-world events and social issues as being more informed by movie history than American history. The same could be said of Tarantino, of course. But with fantasies like Inglorious Basterds and Django Unchained you get the feeling that this is how Tarantino makes emotional sense of the world. Rather than pretending to address social injustice directly, he dreams up instances of cartoon revisionism, empowering those who have suffered to triumph through the magic of his movies. There is an appealing sincerity to these pulp fictions, one that discards authenticity in favor of social context to achieve reconciliation. Say what you will about his sensitivities — nothing in Tarantino’s approach is condescending or pretentious.

Still, there’s little doubt that some will consider a genre exercise that shamelessly mashes up the horrors of American slavery with geeky spectacle as distasteful, if not offensive. Spike Lee, who has loudly decried Tarantino’s unblushing use of the “n-word” in the past, will find little to enjoy here. It’s a valid point of view and one that should inspire some interesting conversations about how we choose to be entertained.

Where Tarantino’s inside-out Western finds success is in the rambunctious bleeding-heart that drives its revenge-minded narrative. Set two years before the Civil War, our titular hero is rescued from slavers by the lethal yet benevolent Schultz. The German-born bounty hunter is in pursuit of the murderous Brittle brothers but has no idea what they look like. Django does, so the two strike a deal: Django gets his freedom and a cut of the bounty if he helps Schultz track the killers down.

But this only accounts for the first hour or so of a nearly three-hour film. Eventually we learn that Django’s wife Broomhilda (Kerry Washington) has been sold as a comfort girl to a Mississippi slaver named Calvin Candie (a creepy Leonardo DiCaprio). Schultz and Django put together an elaborate scheme to buy back Hildy that, unfortunately, is derailed by a wily old house slave named Stephen (Samuel L. Jackson).

For Tarantino fans, none of this will matter. Django Unchained may overstay its welcome and fire a few blanks along the way, but it’s still the kind of infectiously rousing and exuberantly subversive collage of sharp drama, farcical camp, and gonzo violence devotees have come to love.