Do Migrant Families And Limbless Men Pose A Threat To U.S. National Security? 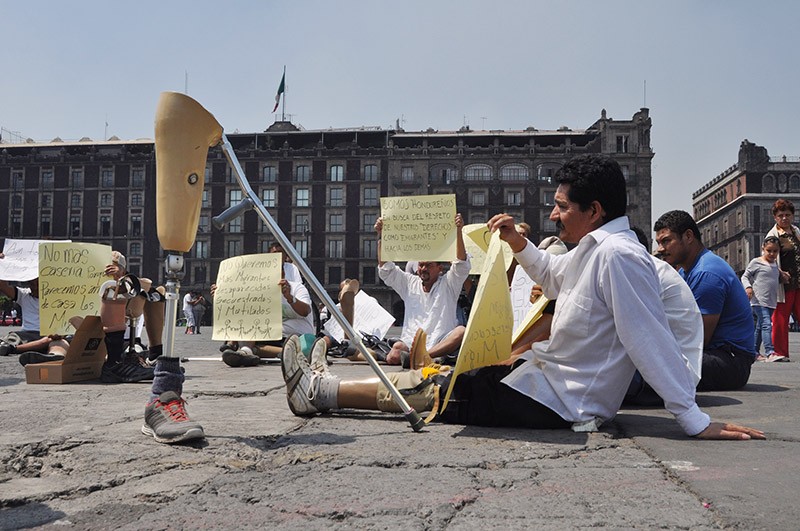 Kenia Galeano wasn't sure what would become of her after crossing an international bridge from Mexico and surrendering to U.S. border agents in the Rio Grande Valley in November.

Surely, she thought, the land of the free and home of the brave would at least afford her an opportunity to make her case and be given a chance to stay in the country.

Instead, she and 11-year-old son Alejandro were promptly processed for being in the country illegally and detained for five months while fighting deportation.

The mother and son were held in Karnes City, a tiny town about an hour south of San Antonio and home to one of only three federal immigration detention centers for families in the country.

"It was shocking," Galeano, 26, recounted in an interview with the San Antonio Current last week, just days after she was granted the rare opportunity to get out on a $7,500 bond pending her court case.

She's appealing her asylum request denial. Her argument is that she escaped Honduras because ruthless gang members were hunting her down after she turned one of them in for threatening her family.

"They can call it what they want, but it's a prison," she continued. "It's bad enough for adults, but how are you going to have babies imprisoned? Kids can't even run around, they must be within a yard of their mothers at all times."

Galeano was one of around 100 mothers and their children — most from Central America — detained in Karnes City. Three were able to bound out; the rest remain inside.

They made headlines by staging a hunger strike, then halting it to give authorities an opportunity to reverse course. But no action was taken, so the hunger strike is back on.

Guatemalan mothers who only speak Quiché, a Mayan dialect, and thus can't communicate in Spanish, are particularly harassed, Galeano said.

For its part, ICE has not recognized nor discussed the hunger strike. In a statement to the Current, the agency said it's ensuring "residents" are served three daily meals and are provided adequate medical treatment.

"ICE fully respects the rights of all people to voice their opinion without interference, and all detainees, including those in family residential facilities such as Karnes, are permitted to do so," according to the statement.

Upholding human rights is about the last thing the agency does, said Jonathan Ryan, executive director of Refugee and Immigrant Center for Education and Legal Services, a statewide nonprofit agency based in San Antonio.

The organization, commonly known as RAICES, represents and advocates for dozens of asylum applicants.

Ryan said it's no coincidence that ICE is promptly jailing women and children and fighting their release.

"They've been deemed a threat to national security and that's why this policy of family detention was implemented as a deterrence," he said.

And apparently the next threat is migrants with missing limbs.

Ryan is representing nine Honduran men who succumbed to La Bestia, literally "The Beast," the cargo train crisscrossing Mexico atop which thousands of undocumented migrants ride to get to the U.S. border.

Hundreds of them fall off or are pushed off and end up killed or, if they survive, it's resulting in lost limbs.

With rickety prostheses, a group of Honduran men trekked through Central America and Mexico — again — as part of La Caravana de los Mutilados, or "Caravan of the Mutilated," to raise awareness of the plight of hundreds of others just like them.

Their goal: Not to immigrate to the U.S., but to meet with President Obama and convince him to enact immigration reform so there will be no more mutilated migrants.

Unlike here, back in Honduras, handicapped people don't stand a chance of making any sort of living, said Norman Varela, part of the group currently detained in the federal immigration detention center in Pearsall. They turned themselves in to U.S. border agents at the international crossing in Eagle Pass on March 19.

In a phone interview from the prison, Varela said he lost his right leg in 2005 when Mexican immigration agents pushed several migrants off La Bestia. The train was stopped but then it started with Varela stuck underneath.

When he made it back to Honduras, he formed a support group of 64 other migrants with missing limbs — now he counts more than 600 nationally.

Like the detained families, Varela said his group in Pearsall are seen as troublemakers and are repeatedly threatened to be put "in the hole" if they don't shut up.

Asked for comment, ICE pledged to look into the matter but it did not get back to the Current.

"All we wanted to do is talk to people about what's going on," said Varela, 43, father to four teenage boys. "When I get down, all I think about is my kids. Anything to keep them to have to go through what I've gone through."