Do You Make Enough To Afford A Two-Bedroom Apartment In Texas? 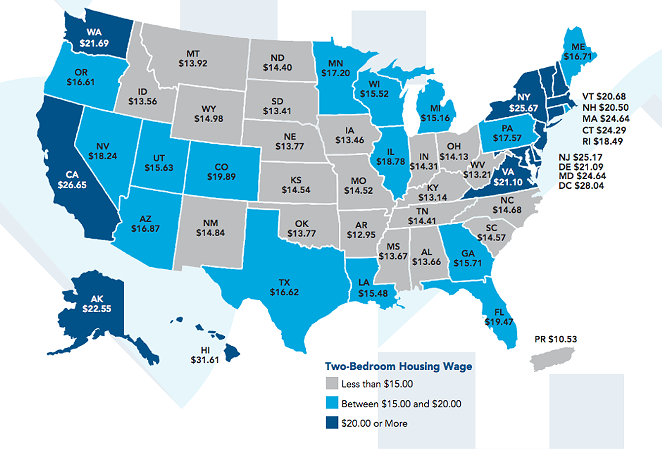 A handy map was published this week to remind you that you don't make enough money. Fortunately, the infographic's blue and white tones will help soothe you as you come to terms with this very depressing reality.

The National Low Income Housing Coalition released a study detailing how American workers are facing stagnant wages in concert with rising housing costs. As Oregon Governor Kate Brown writes in the study's preface, the rent is too damn high. We're paraphrasing, of course, but here's what she said about the state of rental housing in America.

There simply isn’t enough reasonably priced, decently maintained housing to meet the demand, and rapidly rising rents outpace wages. As a result, one out of four households spends more than half their income on housing costs.


The study calculated how much hourly wage workers must earn in each state to reasonably afford a two-bedroom apartment. In Texas, that hourly wage comes out to $16.62. But before you point out how Austin, Dallas and Houston have a higher cost of living, you should know that in San Antonio, workers must make $16.77 and hour in order to reasonably afford a two-bedroom apartment in the Alamo City. Average rent for a two-bedroom in town totals $827.

The other sad takeaway in the report is that nowhere in the United States can a person making minimum wage afford even a one-bedroom apartment, a sad example of how rising inequality is taking an economic toll on average Americans.

To illustrate this, the study also published a map detailing how many hours a week a person earning minimum wage must work in order to afford a one-bedroom rental. In Texas, that total is 73 hours, nearly twice the standard 40-hour work week. It's worth noting that many people earning minimum wage in this country often can't work full-time hours due to cost-cutting measures by employers. 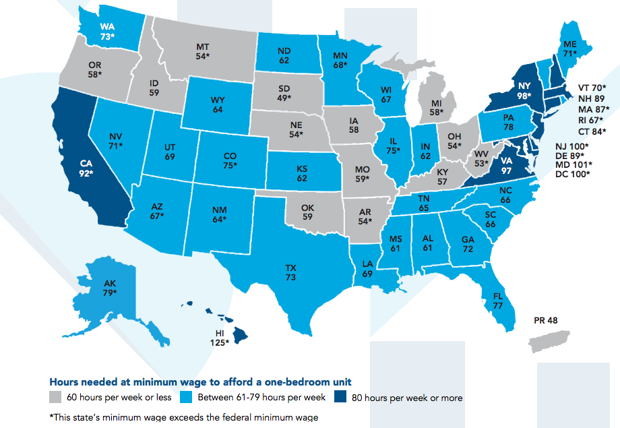 Still, while the numbers point out a stark reality, San Antonio is currently experiencing a luxury rental housing boom downtown, with monthly rents surpassing $1,000 for even a tiny, amenity-filled studio. And as our cover story last week pointed out, there are plenty of people more than willing to pay those prices. Still there are plenty of people in this city who are being left behind.