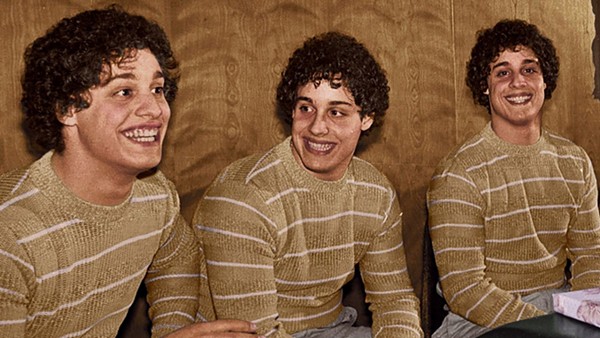 The first 20 minutes of the stranger-than-fiction feature documentary Three Identical Strangers are joyous — a real-time retelling of the jaw-dropping scenarios that led to the reunion of three brothers who had been separated at birth 19 years prior.

“When I tell people my story, they don’t believe it,” Bobby, one of the triplets, says as he shares the incredible account that starts with him stepping onto the campus of a community college for the first time in 1980 and being immediately mistaken for who he would later learn is his long-lost brother Eddy. The tale becomes even more astonishing when a reporter writes a human-interest article on the boys, which quickly leads to the discovery of a third identical brother, David.

Directed by British documentarian Tim Wardle (Lifers), Strangers begins on an upbeat albeit bizarre note as we watch the lives of Bobby, Eddy and David meld into one. From countless TV appearances and interviews to a cameo in Madonna’s 1985 comedy-drama Desperately Seeking Susan, the triplets ride a wave of media frenzy and become overnight stars.

Beneath the fairytale, however, is something malicious. While the brothers seem content with simply knowing they have found each other, their parents begin to ask why none of them were told they were adopting a child with identical siblings. The truth starts to slowly trickle out and takes a dark turn to reveal a surreal narrative that centers on the psychological debate over nature vs. nurture and how hereditary and mental health factor into one’s sense of identity.

Without delving into some of the shocking twists in Strangers (it’s better if audiences know as little as possible about the triplets’ story when they walk into the theater), Wardle proves to be an expert in pacing. The way the film rolls out feels like a thriller. It’s reminiscent of other unexpectedly peculiar documentaries in recent years like 2010’s Catfish and 2012’s The Imposter but manages to shift into an even more somber tone than anyone could’ve imagined.

At the root of this story is Louise Wise Services, a now defunct adoption agency operating in New York that was considered the best agency on the East Coast for Jewish families looking to adopt. Through surprisingly candid interviews with a couple of people who worked for the agency in the 1960s and knew of the perverse incidents taking place, along with heartfelt interviews with the siblings, their families and other adoptees, Wardle has produced a documentary that is equal parts fascinating and disturbing.

By the film’s end, there are plenty of unanswered questions that might leave some viewers wishing things could have tied up a bit more definitively, but chances are this isn’t the last time Three Identical Strangers will make headlines. These families deserve more, and it’s Wardle’s highly engaging film that could get them the closure they seek.