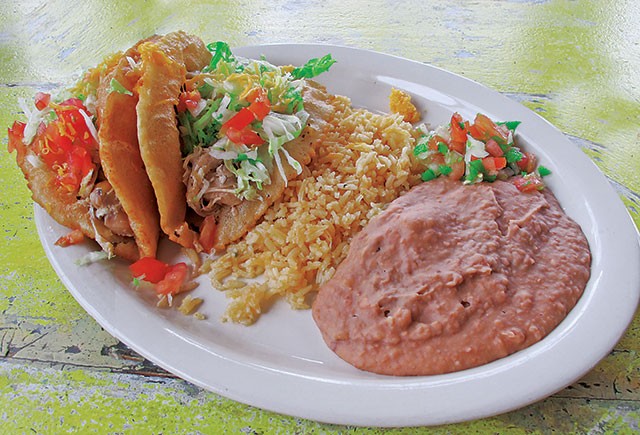 Having received a receipt ending in two zeros, that was one of the possible responses. But having earlier watched my order for puffy tacos being dispatched to the kitchen along a wobbly wire, I wasn’t sure whether the shout-out would come in English or Spanish. Taco House, furnished with a motley collection of brightly painted picnic tables and drab dinette chairs, is that kind of place — comfortable in two worlds, like much of San Antonio.

I had driven by Taco House on San Pedro north of Basse Road many times over the years, never finding a reason to choose it over the hundreds of taco joints that populate the city. But a friend, on a quest to seek out calabacita con pollo (apparently an endangered species), had found it at TH. He deemed it good but was more impressed with the arroz con pollo, a plate I had learned to both love and loathe (it was served a lot) while living in Colombia. If for you this dish is either new or nostalgic, be warned: it’s served only on Wednesdays and sells out early. That is why I was making do with puffies on my first visit, since my 12:30 arrival was too late.

Turns out that I wasn’t compensating with second best. Puffy tacos are alleged to be a San Antonio creation, and two or three places claim to be the source. But I’ve never had better than here. Bursting at the seams with well-seasoned chicken (beef is the other option), chopped lettuce and shredded cheese, the inflated, fried pockets are crisp and just greasy enough. Ladle on your salsa of choice from the convenient bar and I’ll be surprised if you’re not singing puffy praises. The refrieds are fine but necessarily take a back seat. Ditto the Frisbee-sized and flaky flour tortillas.

I ordered corn tortillas with my chile relleno on another day (it took me a while to schedule in an early Wednesday), and though good, I found that I actually preferred TH’s flour version. The main virtue of the relleno, cloaked in a spongy egg batter and filled with an OK beef picadillo enlivened with a little potato, was its served-on-the-side sauce. I’ve never had the dish this way either here or in Mexico, where the chile often floats in a salsa sea. Apparently the idea is to keep from flooding out the other items on the plate such as a mediocre, super-smooth guac (get a lemon wedge and use it liberally), and as such the notion is appreciated. But I’d rather have more of a more assertive sauce, drowning be damned.

When the day finally arrived that the pollo and I made contact, any quibbling over salsas was soon forgotten. Arroz con pollo can easily be dry and perfunctory, but when cooked with the kind of care that the kitchen obviously lavishes on simple rice and chicken, it’s a comfort food Sistine ceiling. Amped up from the standard version, the rice is colorful with carrot slabs and celery, the chicken, a prodigious piece, is moist and flavorful … and the accompanying, bacon-y charro beans are almost obscenely good. Maybe delayed gratification had something to do with my response, but even discounting a little for irrational exuberance, the dish scored on all counts. Get there by 11:30, just to make sure it hasn’t been wiped off the white board. And remember: cash only.