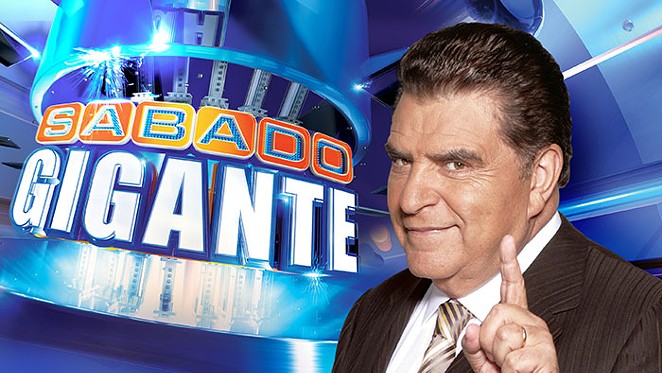 Hate him and his show or not, for millions of Latinos in the United States and millions more across Latin America, everybody knows Don Francisco and "Sábado Gigante."

Hell, even non-Latinos are familiar with his face and have likely seen the show at some point or another.

It's all coming to an end now.

The show set a Guinness world record three years ago as the longest-running uninterrupted show in all of TV — Spanish or English. It's slated to end its 53-year run on the air on Sept. 19.

The Univisión variety show, which comes on every Saturday night for three hours, is based in Miami and gets an audience of about two million viewers in the United States. That's on top of tens of millions of diehard fans in 40 other countries, including every single one in Latin America.

Rumors of a possible demise had floated for some time, but the announcement on Friday morning came as somewhat of a surprise — seems a bit sudden, since the show is still doing well. Univisión did not specify a reason for shutting it down.

As popular as the show has become, it would have never reached a global audience were it not for the man behind it all: Don Francisco.

That's at least how the world knows the TV personality.

His real name is Mario Kreutzberger, originally from Chile — the son of Jewish parents who fled Nazi Germany — where he started a local and much smaller version of the show, then titled "Show Dominical," in 1962.

He moved to Miami in 1986, the year "Sábado Gigante" launched.

Kreutzberger, 74, thanked the show's fans for their dedication across the generations, though he also did not get into why the show is getting cancelled.

"From the start we made sure to ask, 'What does the audience want?! And we have worked tirelessly for precisely that audience, with the utmost dedication, humility and deep respect," he said in a statement, according to the Los Angeles Times.

Despite its worldwide popularity, the show has not gone without its critics. For decades, it has been labeled as extremely sexist with its scantily-clad co-hosts typically flanking Don Francisco. None other than another popular TV host, Stephen Colbert, often made fun of "Sábado Gigante" on his show.

A possible reason why the show is ending is because, though viewers have stuck with it through the decades, they have tended to skew older. Perhaps Univisión now wants to go in a different direction.

"Sábado Gigante's ratings continue to be very strong. So on the one hand I think it's a loss for music in that the show was a platform for a lot of artists, new and established. On the other hand maybe Univisión wants to aim for a younger audience," Leila Coba, who directs Latin content and programming for Billboard, told The Miami Herald.