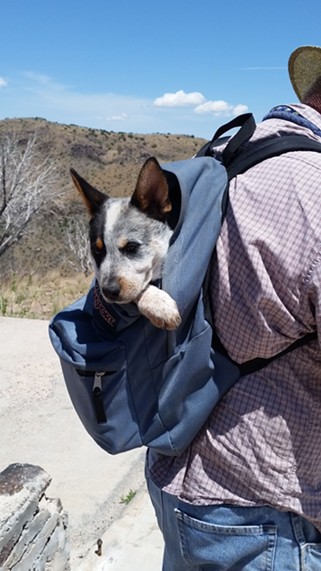 Cathy Tomsett says she was walking her year-old dog, a heeler-looking mix named Woodrow, in a state park along the Cibolo Creek northeast of San Antonio on Saturday. In a message she left on the Texas Parks and Wildlife Facebook page this week, Woodrow said it had "become an evening ritual to load up our dogs for a romp in the park." She says they often encountered other walkers and dogs, which were always off-leash — despite a sign at the park that says, "All dogs must be leashed."

Tomsett suggests state park officials change that language to say "All dogs off leash will be shot on sight." That's because on Saturday, when Woodrow ran ahead of her, it so spooked a deputy game warden named Javier Fuentes that he shot and killed the pet. "I'm not claiming to be a forensics expert, but it was clear my dog was shot from a distance, through the side, and although there was blood everywhere, Officer Fuentes didn't have a drop on him," Tomsett wrote in her message. "I was within 100 feet when he killed my dog."

According to the Texas Parks and Wildlife Department, the game warden was patrolling the area and shot the dog out of fear he might be injured. As a Schertz police lieutenant who responded to the shooting told the Express-News this week, the game warden had been searching for poachers, ran across the dog chasing some deer — "That’s when the dog seemed to be aggressive towards him" — and then fired once.

Tomsett (who couldn't be reached for further comment * see update below) clearly disagrees with that assessment, but says she won't be filing a complaint against Fuentes:


"He is the man with the gun and I know I could never win that battle. However, TPWD might consider changing their sign at the trail head that reads 'All dogs must be leashed' to 'All dogs off leash will be shot on sight.' Another consideration might be to remove Officer Fuentes from duty in an urban, populated environment."

Tomsett, who responded to our questions by email this afternoon, says Woodrow was indeed a heeler mix and weighed around 50 pounds. She sent us this picture to better show his size (she says the above photo, which accompanied her Facebook message to TPWD, shows Woodrow when he was a puppy).

She also included a more detailed account of what happened. Here's some of what she told us:


Woodrow was shot through his side from a distance. He was not attacking the Game Warden. He had run ahead of us with our other dog, Gus. My husband, Chris, whistled at them to come back and Gus did. We were within 100 ft. of Woodrow when he was shot. After he shot him, the Game Warden drove off. We never heard a car door slam. We never heard growling or barking. We heard the shot and the cries. When he was hit, Woodrow spun in a circle, leaving a large circle of blood. Then he ran up the park road about 50 ft., leaving a big trail of blood, and died. My husband saw blood spewing out his side. He was probably shot through the heart, there was an entrance wound and an exit wound, from the side, through his chest, and that would explain the huge amount of blood.

Game Warden Fuentes was driving away and my husband stopped him. He got out of his SUV. We were totally freaked out. Fuentes seemed nervous and weird and was fingering his pistol. My husband put his hands on his head, screaming at Fuentes “You just shot my dog!” Fuentes stated that our dog was chasing the deer and scaring them. Then he said our dog was aggressive toward him. I told my husband to stay away from Fuentes or he would shoot us, too. We ran to Woodrow and Fuentes drove away. Woodrow was already dead. My husband carried Woodrow to our truck in the parking lot. It was a short distance, about 5 minutes, and my husband was literally soaked through with blood by the time we got there.

Fuentes had us blocked in (we were the only vehicle in the parking lot) with his headlights on. All we wanted to do was go home. Fuentes got out of his vehicle and told my husband he wanted to talk. My husband said, No, we just want to go home. You killed our dog. (I’m sure there was some swearing involved. We were very upset.) My husband took his shirt off so he could get in the truck. His skin was soaked in blood. His jeans and shoes, too. Fuentes told my husband he had his dash cam running and that he had called the Schertz police to make a report. I was in the truck with our other dog, Gus. I just wanted to take my Woodrow home – to get away from Fuentes.

Schertz police arrived. My husband talked to them. They asked if we wanted to file a complaint. We both said no, not at that time, just let us take our dog home. Finally, Schertz police let us leave. Woodrow was in the back of my truck.

The next day, we had to bury our dog. There was a large pool of blood and tissue in the back of my truck. I had to hose that out, something I didn’t realize was going to be as painful as it was. Because blood was all over Chris from carrying Woodrow, it was all over the inside of our truck. It was horrible to think that someone would shoot an innocent dog.


Tomsett says a TPWD representative called her again yesterday to apologize for the incident — and to again ask if she planned on filing a complaint. Despite what Tomsett says the game warden told her husband about a dash cam that might have recorded the incident, she says the TPWD official she spoke to yesterday told her no agency vehicles are equipped with dash cams. We asked the department about the discrepancy, and why an game warden would have taken off in his car after firing his weapon at a pet. We'll update if we get a response.