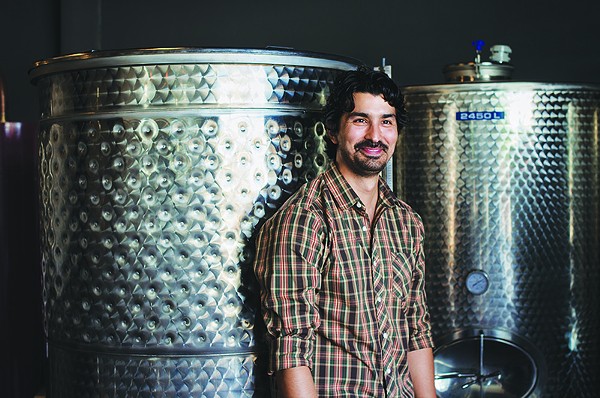 It's not exactly like Trevor Noah replacing Jon Stewart, but there are similarities. Well, maybe a couple.

Nick Kenna helped define the brand as the first bartender at Dorcol Distilling, an enterprise whose bar exists primarily to promote owners Boyan Kalusevic and Chris Mobley's apricot brandy. The entire list of cocktail zingers, as currently constituted, is Kenna's creative take on turning an unfamiliar spirit into drinks with which most people would feel comfortable.

So when Kenna received an offer he couldn't refuse to depart for Blue Box, it was a little hard to imagine who might fill those stylish shoes. Sure, bartenders are notorious for moonlighting and moving around, but the rise of cocktail culture in San Antonio has seriously stretched the gene pool.

At least at first, it was even harder to imagine that the replacement might not be an experienced bartender at all. But after some mutual sniffing around, Kalusevic and Mobley offered the job to Valentino Lucio, who spent the last decade as a reporter at the San Antonio Express-News with just under a year writing for the paper's food section (Taste).

As a writer, also with no behind-the-bar experience, who did a guest shaking-and-stirring stint at Dorcol during its search for a candidate, I couldn't decide if this was visionary or suicidal. (Both terror and elation were part of the equation during those seven hours on my feet.)

Only one way to find out.

Lucio and I met at Bar 1919 for a heart-to-heart session over drinks.

You've been at the E-N long enough to have experienced print journalism in many capacities. Where was writing in the food section on that spectrum?

I started out in advertising, but had an interest in writing. There was an opening in Neighbors [long-defunct community sections] and I did that for a year before it changed and I moved to the cop beat. I can now go to parts of the city and remember 'this is where that guy got stabbed ... But I have a degree in business, so I eventually took over real estate writing at a time when Pearl was developing and the craft beer scene was beginning to emerge. I was keeping an eye on that industry when the opening in Taste came around. I think your personality should match your job, so I was lucky to find that one.

So why did you leave?

I wasn't looking to, but the position was described to me as not being purely behind the bar. They wanted blogging, more social media presence, help with events and press releases, new product development ... plus there's something romantic about bartending. Shooting the shit with guys like Don (Marsh), Jeret (Peña) and Nick was inspirational. They're all willing to share and their passion drew me in this direction. It would have been hard to walk away [from the offer].

Apart from madly trying to memorize all of Dorcol's rakia-based cocktails, what have you been doing to prepare?

I've been messing around with the spirit to see what goes with it. I'm looking at chamomile, maybe some oily nuts or tropical fruits ... but mostly getting familiar with the current menu. I'm a home brewer, so I understand how flavors work ... as a brewer you're always experimenting, playing with different ingredients. Maybe we'll do a hops-infused house bitters, a few beer cocktails...

You have a wife, two young kids, a house ... is your family cool with such a drastic change?

I got my wife's thumbs-up. She's not into mezcal yet, but otherwise she's a willing participant [in my spirts investigations]. And my house is only a block and a half from Dorcol; I can do some work from home and I'll be with my kids even more than before.

Where do you see the SA bar scene, and your place in it, in the future?

San Antonio hasn't yet reached a saturation point. The action is now [mostly] around downtown, but there's plenty of room for growth north, towards The Dominion ... Personally, I'm wanting to expand my skill set, looking to get involved in next year's cocktail conference. And [the guys] have talked about expanding offerings [to some other spirits], there's also an oak barrel at the distillery that they want to play around with ... What that will yield and when, who knows.

So does becoming a bartender mean you're going to have to acquire some tatts?

I don't have any now and no idea of getting any. Anyway, I'm not that attached to any one symbol.