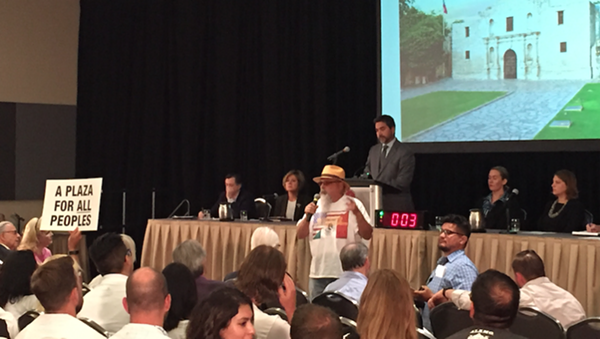 In a passionate and lengthy public hearing Tuesday night, the group charged with developing the Alamo plaza redesign received what felt like a public beating from over 200 community members. The meeting, held in the Henry B. Gonzalez Convention Center, was the last hearing before City Council votes on May 11 for the proposed $300 million "Reimagine the Alamo" project.

"This project has no reverence, it shows no honor on ground that was full of honor for two weeks in 1836," said one Dallas resident who drove down to speak. "Your garish urban park guarantees that future visitors will no longer remember the Alamo."

Dozens of concerned citizens gave such feedback to the six members of the Alamo Management Committee, which includes downtown city councilman Roberto Treviño. They echoed many of the previous complaints about the "Reimagine" designs.

One overarching critique was that the plexiglass wall design, proposed to border the entire plaza surrounding the mission, was neither historic nor functional. Janet Dietel, president of the San Antonio Conservation Society, worried the giant barrier would create bottleneck traffic around the Alamo downtown. “We believe the plan should guarantee continued enjoyment and use of Alamo Plaza as a civic space with access from Houston Street while providing necessary security and protection of the Alamo,” she told the panel. Later, committee member and SA City Manager Sheryl Sculley insisted the plan to close Alamo Street through the plaza was justified.

Many people showed up to complain about the possible removal of dozens of century-old trees from the grounds, as well as the removal of the cenotaph nearby. Indigenous groups insisted the committee didn't seek their guidance nor did they consider the complicated cultural significance of the Alamo site to SA's indigenous population.

Lance Aaron, owner at the Américas Heritage company, complained that the design plans did not go far enough in preserving the historic acequia madre, which was constructed by the Mission Indians, and instead offered up an "offensive" and "fake" redesign that would span the mission's cemetery area. Two Bears with the Coahuiltecan Nation pointed to a timeline graphic that accompanied the designs and said, "They start this history at the battle of the Alamo — but where do you see Native American history represented? How come our art and our people aren't in the church?"

In closing remarks, Treviño remained buoyant and emphasized that "our process will embrace and honor, with great humility, the importance of this effort. We will continue to listen."

City Council will decide whether to move forward on the designs next week.