Drew’s finding its way around the deli 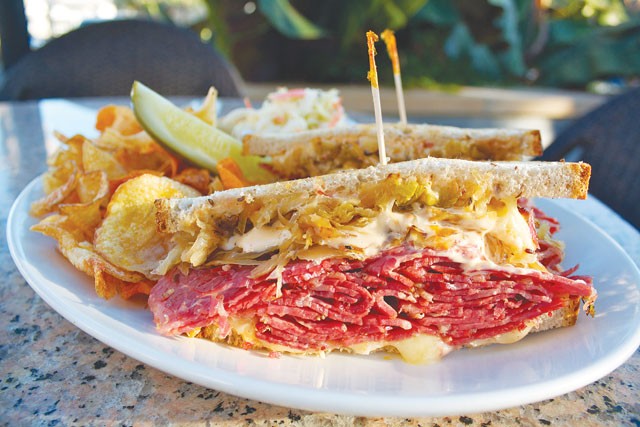 Drew’s has recently risen from the ashes of the late Watermark Grill. What, you didn’t know there had been a fire? I’m speaking metaphorically, but apparently the building’s middle-of-the-night-type abandonment left a litany of problems in its wake, occasioning expenses well beyond the visible reupholstering, the new lighting, and the painting. Always handsome, the space now glows, especially at night.

The warmth continues with the hospitality of the owner, Drew Glick, and his pleasant staff. Glick, who arrived from New York to do “maybe a little deli,” still seems shell-shocked at what has evolved — menu included. Some elements of classic New York deli are at the kernel of that menu, but the chef and sous chef Glick recruited at a Waldorf Astoria property in Orlando have not let tradition stand in the way. The result is a document that won’t make the jaded foodie’s heart beat quicker, but talent and creativity lurk beneath the surface.

Talent and creativity are a good base, but they can also occasionally act as blinders. Take the grilled dolmas. This is a case where the usually superfluous quotation marks might actually be justifiable, as the dolmas are inspired by the original, subbing swiss chard for grape leaves and goat cheese and marcona almonds for rice. Sounds great and tastes good, too, with a roasted red pepper coulis adding both visual and taste-contrast appeal. The problem is in the “grilling.” On a round of the dining room, the chef explained that he really just heated the rolls a little on the grill to create a cool-warm contrast, but the fact is that it doesn’t work; expectations suggest something thoroughly warm—even charred, but by the time the plate arrives any warmth has dissipated. The accessory fried lemon slices also sound promising, but mine were merely bitter.

The name is the only issue with a salad labeled “Roasted Baby Beets.” Yes, there are roasted beets in the mix, but they are hardly the dominant factor in a beautifully balanced blend that includes arugula, frisée, candied red onion, and more in just enough delicate sherry vinaigrette. Unmet expectations aside, this is one of the best salads currently in circulation.

My expectations regarding pastrami and other icons of the deli demimonde come from living five years in Manhattan, but this hardly makes me the maven with the mostest creds. Glick does, however, make a big deal out of his “imported” deli products, and has contracted to ship in his pastrami, corned beef, dogs, pickles, and even sauerkraut by the almost-ton. Everything else is made in-house, including the rye for the Reuben, and here I will go out on a limb and suggest they nailed it. I’m less convinced by the pastrami which, though makes a pretty good sandwich, would be better yet served messier/lustier, and by a kraut which arrives pristine and is fiddled with to make it more Reuben-esque. Strikes me that it would be a better contrast to the meat in a less-fiddled state; the pickles are perfect, however; the house cole slaw lacks any real flavor.

Texans do know from cole slaw, and the lack of punchy flavor is an issue with other dishes that are otherwise admirably executed. A handsome dish of shrimp orrechiette proved that the chef can certainly put together a thoughtful mix of perfect, tail-on shrimp with impeccable asparagus and roasted red peppers; there was even a hint of Pernod or absinthe. So it may be that the pasta is not always chewy. But it is certainly within the control of the chef to ratchet up the flavor of the white wine cream sauce. This is Texas, guys; we don’t require being knocked on our butts with every bite, but full-bodied taste is appreciated.

A dish that should also be hearty/earthy is the braised beef short rib. Yes, singular. Sampled without the accompanying natural jus, it had little personality of its own — though it did have a just-right, fall-from-the-bone texture. Plate-mate butternut squash purée tasted of the real thing, nothing more; the sidekick creamed spinach was just that. Can’t believe I’m suggesting the merest whisper of nutmeg.

Drew’s banana pudding is a dessert they may be sorry they ever offered; it’s obscenely popular, and a boozy variation tasted at a launch of Rebecca Creek’s whiskey only confirmed its worth. Foodie friends with impeccable taste are mad for the warm cookies and milk and the PB&J panino between house-made challah. Naturally, I had to try the NY style cheesecake.

There’s little agreement on its exact composition, but it should, in any case, be tall, dense and creamy… with maybe a little citrus zest. There’s no discernable zest in Drew’s, but otherwise, mazel tov. Promise to split it. And promise, too, that you will give Drew’s a try; it’s a place I will be happy to revisit over time to check its progress. And there’s always the incentive of the really serious bar with exceptional cocktails and a Mixology Monday reverse happy hour from 9 to close when all drinks are $5.

We still need a perfect little deli, though. •

Best Bets
Reuben to cheese cake, plus any stirred or shaken cocktail.