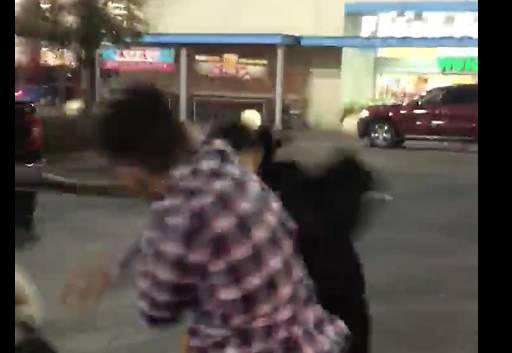 Seriously, nobody should be that worried about parking in San Antonio. Compared to other big cities, there's almost always free an abundant (or, at the very least, cheap-ish) parking space here. Everywhere.

Which makes it all the more dumb that a wild-punch-swinging melee erupted this weekend outside the H-E-B at Culebra and 1604, reportedly because of a disagreement over a parking space. As you can see from the now-viral video witness Eric Castillo shot during the brawl, a store staffer had to step in to break things up (while what looks like a security dude just circled around on his segway, that is). According to MySA, San Antonio police showed up but made no arrests because the complainant had left by the time officials arrived.

Meanwhile, TV station Kens5 reported last night that H-E-B is now boosting the private security it's hired to watch over seven San Antonio area stores, including new K9 units to roam the parking lots. Company spokeswoman Julie Bedingfield tells the station the K9 units should be a "visual crime deterrent," but insisted that the added private security isn't due to any particular incident — like, say, a stupid brawl over a parking spot this past weekend.

"It's just something new that we saw," Bedingfield told the station. "It's not a reactive measure at all. It's a proactive measure."