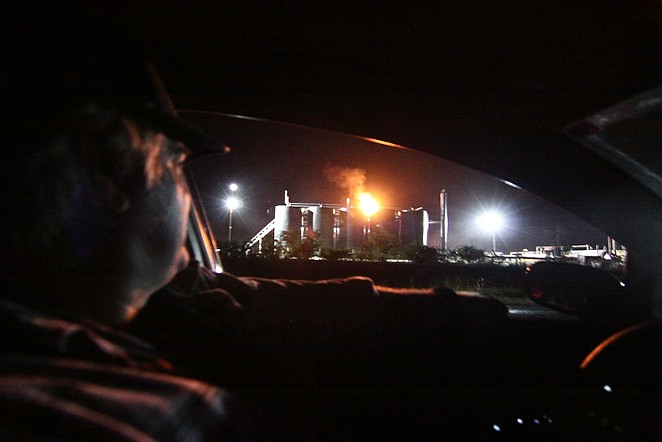 Myra and Mike Cerny moved from the San Antonio suburbs into a fixer-upper house on a one-acre tract of land in Karnes County several years before oil companies discovered the shale gas revolution beneath the South Texas dirt.

The Cernys wanted a quiet country life, but, by 2010, companies eager to frack the Eagle Ford Shale had begun to encircle their small, one-story country home. Sure, there were the modest, if not sporadic, royalties checks. But soon enough, Mike began to suffer from debilitating headaches. Myra started to notice mysterious rashes on her arms and legs. Their teenage son had frequent, gushing nosebleeds. Seemingly overnight, the Cerneys had become a family of asthmatics, regularly sucking down albuterol inhalers just to breathe.

It wasn't just the health problems. The Cernys had to get used to the ground shaking once drilling started near the house. Sometimes the walls would rattle, and small cracks started to form in the ceiling. Pallets often flew off the backs of oilfield services trucks in front of their house, more than once flattening their mailbox. After a while, Mike stopped buying new ones.

In a way, the Cernys were pioneers, among the first ordinary people in the Eagle Ford to sue over oil and gas activity that had suddenly landed on their doorstep. In their lawsuit filed in Karnes County two years ago, the Cernys claimed that benzene, toluene and other toxic chemicals belching from two nearby facilities (owned by Marathon and Plains Exploration & Production) had basically made their lives miserable. Experts compared their case to some of the earliest suits filed against the tobacco industry.

But last week, the Cernys' lawsuit ended with a whimper when the Texas Supreme Court refused to hear the case, upholding a lower court's decision to dismiss their claims on the grounds that they couldn't definitively prove their health problems were tied to oil and gas activity

Which is curious, considering Texas' own oil-friendly environmental regulators had already found elevated – and illegal – oil refinery-like emissions surrounding the Cernys. In 2013, we profiled the Cernys as they tried to get Marathon, local officials, and the Texas Commission on Environmental Quality to take their complaints seriously. At the time, Myra said she'd wake up in the middle of the night with her eyes burning, rushing to the sink to splash water on her face. Depending on which way the wind blew, the chemical stench outside their house was sometimes vomit-inducing. Family members would no longer visit because the stink bothered them too much.

As we reported in 2013, a TCEQ investigation would eventually show that at the nearby Marathon site, emissions of benzene, a known carcinogen, and other irritants far surpassed permitted levels. Experts told us that chemical emissions around the Cernys' house were sometimes as bad as you'd find near an oil refinery.

The Cernys filed their lawsuit not long after a North Texas family, Bob and Lisa Parr, scored a groundbreaking, $2.9 million judgment against Plano-based oil company Aruba Petroleum. The couple, who were featured in anti-fracking filmmaker Josh Fox's Gasland II documentary, deployed the same argument the Cernys would later make – that toxic emissions had created a nuisance that had made life unbearable. In its court filings appealing the verdict, Aruba has cited the Cernys' case.

Tommy Ramirez, the attorney who represented the Cernys in their lawsuit, called the Texas Supreme Court's decision to let the case die before a jury could hear it "a terrible injustice for this family still living in these very difficult conditions."

"I am very disappointed that all levels of our Texas courts totally disregarded decades of nuisance laws to rule in favor of the oil company," he told the Current.