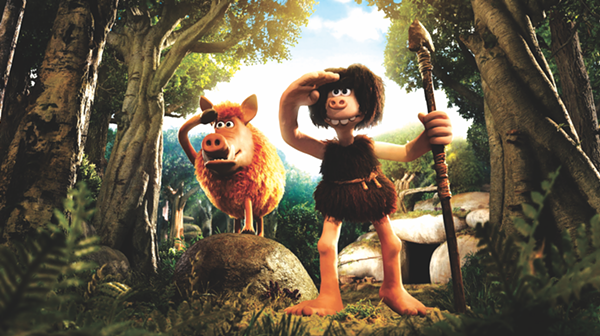 Apart from a character like late comedian Phil Hartman’s Unfrozen Caveman Lawyer on Saturday Night Live in the 1990s, most on-screen Neanderthals have been portrayed as doltish, uncivilized apemen for more than 100 years.

In Charlie Chaplin’s 1914 short silent film His Prehistoric Past, the iconic actor wears an animal skin toga and twirls around like a fool trying to win the heart of a pretty cavewoman in a grass skirt. More recently, the 2015 animated film The Good Dinosaur features a feral caveboy who sniffs around and bites things like a rabid chihuahua. If cavepeople still existed today, we’re sure they wouldn’t appreciate the stereotypes associated with them — from clubbing potential mates over the head to ultimately falling into a river of lava since their pea-sized brains can’t process the temperature of molten rock.

Sure, Encino Man gave the caveman movie subgenre some credit by transforming Brendan Fraser into an average California teenager, and Fred Flintstone benefited from modern-day conveniences like automobiles, telephones and even vending machines, but more often than not, cavemen have always been denied those few extra brain cells when it comes to movie and TV entertainment.

Such is the case once again with British director Nick Park’s newest stop-motion animated film Early Man, which follows a group of friendly primitive characters as they attempt to save their home from being taken over by a greedy monarch who wants to mine their land for ore. Park, best known as the creator of all things Wallace & Gromit and Shaun the Sheep, uses his distinctive claymation style to build a pleasant prehistoric world, but unlike the last two feature films he directed — 2000’s Chicken Run and 2005’s Oscar-winning Wallace & Gromit: The Curse of the Were-Rabbit — Early Man’s script is lacking in creativity and unconventional ideas.

In fact, audiences might be gobsmacked to find out that Early Man is actually an underdog sports movie — and a mostly clichéd one at that. When Lord Nooth (Tom Hiddleston) forces the cavepeople out of their valley, so he can dig up precious rock and turn it into bronze, the tribe decides the only way they can protect their homeland is to challenge the banana-nosed aristocrat to a soccer match (football for all you Brits), a sport Lord Nooth and his people consider a “sacred game.” Led by buck-toothed, pig-nosed, matted-haired caveman Dug (Eddie Redmayne) and Goona (Maisie Williams), a ringer from inside Lord Nooth’s fortress, the two begin to train their ragtag team for a shot at victory.

As with many underdog sports movies that have come before, Early Man falls into a typical narrative where a meek and unathletic team relies on its heart to compete against a squad of arrogant professional footballers. The by-the-numbers storyline is disappointing considering how imaginative Park’s work has proven to be for the last 30 years at Britain’s Aardman Animations. Instead, the film struggles to make the humor consistent and falls back on things like anachronistic references and obvious ball puns.

Early Man feels like an animated movie that lost its way somewhere in the brainstorming process. There’s no denying the impressive, tangible product Aardman’s talented animators have put on screen. The growling dinosaur-sized duck and Dug’s scene-stealing wild pet pig Hognob are high points. But all the characters feel trapped inside a story that doesn’t belong to them. Park and Aardman might’ve made genre meshing work by turning Chicken Run into a prison-break action flick and Were-Rabbit into a mystery thriller, but constructing Early Man as a deadpan caveman version of 1995’s The Big Green knocks them back a couple of spots on the evolutionary chart.