East Side Bistro: The Magpie Opens in Hackberry Market, Bringing an East-Meets-West Approach to Casual Dining

Named for a harbinger of good luck and guests in Korean culture, The Magpie is a neighborhood bistro in San Antonio’s East Side that promises to welcome guests just as they are.

Chef Jungsuk “Sue” Kim and her husband, Eugene Sanchez, launched the restaurant in late November, making it the first of several eateries to open at burgeoning food-centered Hackberry Market development. In recent years, the surrounding area has become a popular spot for new eateries and coffee shops.

A native of Seoul, Sue studied food and wine extensively. She traveled and worked her way through New Zealand and South East Asia, graduated top of her culinary school class and even worked for Michelin-star restaurant Melisse in Los Angeles.

But, in the end, she and Sanchez were drawn to the culinary opportunities of San Antonio. After traveling abroad in Asia, neither was interested in settling in LA, and the Alamo City — home to Eugene’s family — was a familiar place for both of them.

Though San Antonio’s dining scene is still conservative compared to Los Angeles, Kim said she knows there’s an appetite for exciting ingredients and wholesome, delicious food on the East Side. 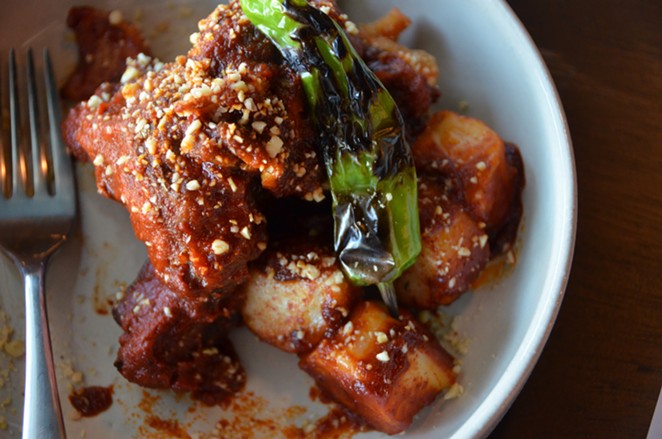 “There are always going to be restaurants that are for the .1% of the world, but those aren’t places that I can take my family,” she said. “I just want my place to be casual and fun. I want to create small dishes that can be shared.”

Kim is no stranger to the local food scene, having previously worked at Minnie’s Tavern and as a sous chef at Dough Pizzeria, but The Magpie is her first independent venture. You’ll find her prepping, cooking and washing in the kitchen, while Eugene takes orders and waits tables in the 600-square-foot space.

However, diners can depend on some items to remain year-round. Those include a handful of pasta items and Korean-influenced plates including the crisp and savory buchimgae Korean pancake and galbi jjim, braised baby back pork ribs served with a rice cake and veggie tempura.

At publication time, a single dessert — a chocolate terrine made with Valrhona Gran Cru chocolate, pistachio anglaise and pistachio crumble — rounded off the menu. Kim recommended pairing it with a glass of bubbly from the wine menu, which is expected to grow in coming weeks.

Despite its limited space, The Magpie aims to grow both its staff and menu while adding longer hours and a weekend brunch. More businesses, including Cake Thieves, Truth Pizza, the Farmer’s Butcher and Black Laboratory Brewing, are also expected to join it in Hackberry Market.