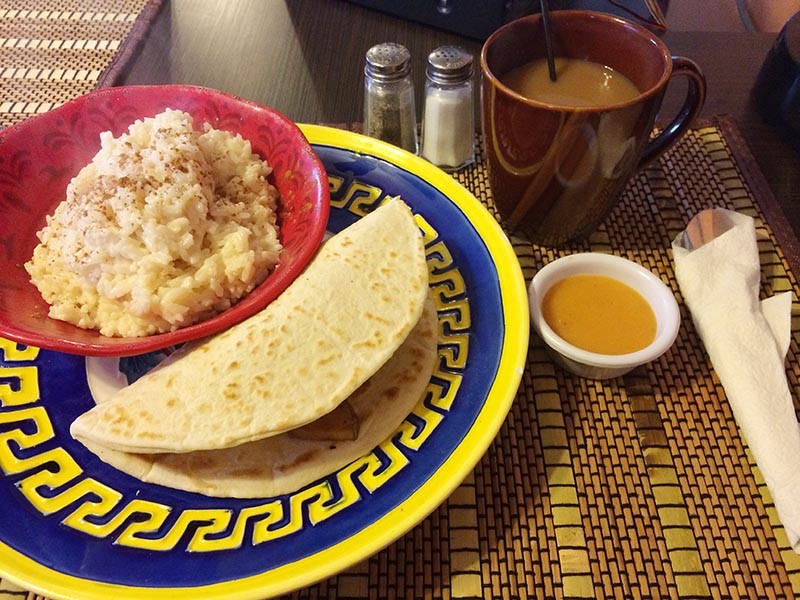 It's hard to miss the bright purple building that sits on the corner of Commerce and Hackberry. The drive-up spot formerly housed a convenience store, signs of which are still evident in the giant coolers that fill up the 300-square-foot space that makes up Amaya's Tacos & Bakery.

During a morning visit, you might find other diners squeezed into the cozy space that made me recall my abuela's house with its carved wooden chairs and peach-colored walls, and I would have kept believing I was in grandma's kitchen save for the skinny chef that was rolling out tortillas by hand near the pay counter.

Amaya's was opened early in December by a group of chefs and cousins that have lived on the East Side for more than 20 years. Brothers David (who studied at St. Philip's culinary program and has had stints at Dough, Oloroso, Insignia, Bella on the River, Le Midi, NAO and the Grand Hyatt), Ruben, Daniel and Samuel (the youngest two brothers also happen to be twins, so no, you're not seeing double) Arciniega teamed up with Joel "Tatu" Herrera, culinary supervisor at the Grand Hyatt and founding member of The Cocineros chefs group, to open the spot.

For now, hours are limited—7 a.m. to 1 p.m.—but that will likely change as the 'hood continues latching onto the food. The menu, too, is small and only features strictly necessary items like a handful of breakfast tacos ($1.50-$2.75), two bowls and specials. The potato and egg taco, served on a thick and pillowy flour tortilla, gave away their attention to detail. The eggs were fluffy, while the potato pieces were roasted nicely with their skin on.

"That's the key to everything they do [in the kitchen]," Ruben said, "[David] wants everything to be made from scratch, his bacon, his eggs, and you can tell the difference when you eat it."

The tacos have already amassed a small following, but the à-la-minute mindset also trickles into the specials, like the chicken fideo with fresh-rolled noodles—no vermicelli boxes here. A particular highlight to my visit during a cold drizzly morning was the availability of atole de arroz ($3.75) on the menu, which was a comforting bowl of goodness, with just the right amount of cinnamon sprinkled on top.

As Ruben puts it, the group wanted to build the eatery and return to their roots: "We're going to create something that's needed, that's helpful to the people who come here ... there's really nothing [on this stretch of Commerce] ... you can go into Southtown or deeper into the East Side, but that's it."

They're coming home and we're coming over for breakfast.