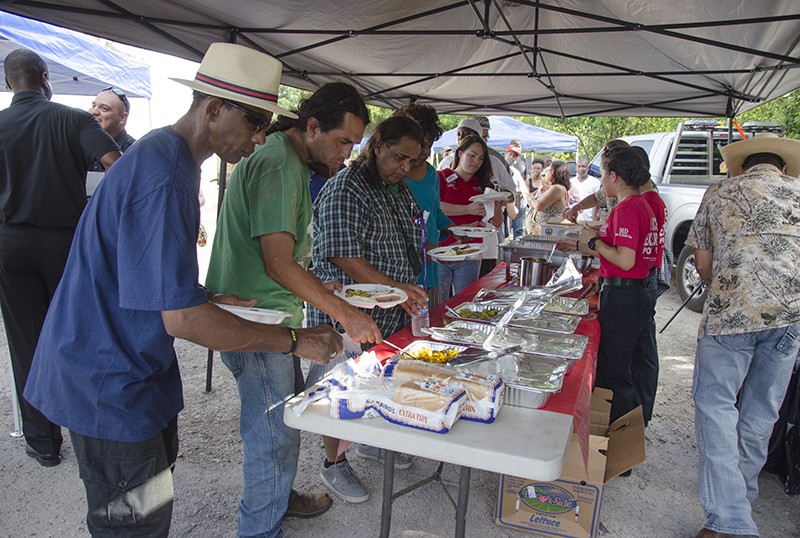 It didn't matter that someone had been shot at that gas station just a couple of short weeks before.

In fact, that was the very reason for it.

East Side dwellers fed up with rampant violence are, as the traditional neighborhood activism saying goes, "trying to take back their streets."

A crowd of denizens streamed on the lot of Handy Stop Convenience at the corner of New Braunfels and Nolan last week to eat barbecue, listen to music and mingle with local cops.

It's one of several criminal "hot spots" targeted by federally funded efforts to dial back crime and drug abuse in neighborhoods falling into the hands of gang-bangers and drug dealers.

Brooke Crenshaw, 38, director of the initiative, said the San Antonio Housing Authority, in conjunction with local community partners, had planned to host the event at the gas station before a man was shot and killed there last month.

"What we're trying to do is encourage the community to come out and take [this space] back," Crenshaw, who has bright red hair, a ready smile and a right arm covered in tattoos, told the San Antonio Current.

Crenshaw said she's been working for weeks with nearby businesses to prepare for the event and organize a cleanup in the vacant lot and alley next to the gas station, an area she said has been used for prostitution and drug abuse.

The desire to "take back" the neighborhood is clearly contagious. A group of men who hang out at a nearby bus stop pitched in with the cleanup without prompting, Crenshaw said. It's moments like those that are a point of pride for her as she talks about the importance of showing community members that they're valued.

"One of the guys yelled, 'Hey, Red, we cleared the alley for you," she said with a smile. "The people who get fined for loitering — yeah. Those are the guys who came out and cleaned the lot. One even brought his mom back to show her 'look mom, I helped out.'"

Pinkie Omar, 61, found out about the event through her daughter, who works for San Antonio Fighting Back, a local nonprofit that offers counseling, HIV testing and resources for those dealing with substance abuse.

It was a bittersweet return for Omar, who lived on the East Side until there was a drive-by shooting near her house.

"I was raising a grandson," she said while in line for a plate of brisket, potato salad, bread, pickles and beans. "It was getting too violent."

She wasn't the only one scared enough to want out.

Neighborhood improvement grant applications cited startling statistics. Violent crime rates in the 4-mile footprint were more than twice the rest of the city, according to 2012 arrest records. Drug-related crimes were over three times higher. Sixty percent of children there live in poverty, compared to 27 percent of children in the rest of the city.

The idea behind the grants is to tackle some of the factors creating or perpetuating poverty — safety issues, housing deficits, struggling schools.

Additional federal grants for the United Way and SAHA tackle safety developments and dial back the root causes of crime and drug abuse. The grants also provided for a study looking at environmental factors contributing to high crime rates.

Crenshaw is now targeting those factors — helping businesses install lights in the back of their buildings, cleaning up vacant lots and asking community members to physically reclaim space that has been spoken for by criminals.

"When you look at someone in the eyes, they're a person. When you look at them through tinted glass, they're an institution," said Christine Drennon, director of the urban studies program at Trinity University, licking barbecue sauce from her fingers.

Mike Casiano, a 12-year cop who has spent most of his career patrolling the East Side, said he wants locals to see him as being on their side.

"Too many community members, including kids, see police as the enemy and we're not the enemy," he said. "We're here to make their communities safer."

The effort to make communities safer is now reaching beyond police to include the city's Metropolitan Health District, which has started a violence prevention program called "Stand Up S.A."

"Our main focus is to stop the killings and stop the shootings," Martin Henderson, 36, a program outreach supervisor who lives on the East Side, said at last week's BBQ.

"We hope these grants bring more progress so that the community can learn more and poverty can be broken," Henderson said as the sun beat down on his face and the music of Jackie Wilson blared from an outdoor speaker.