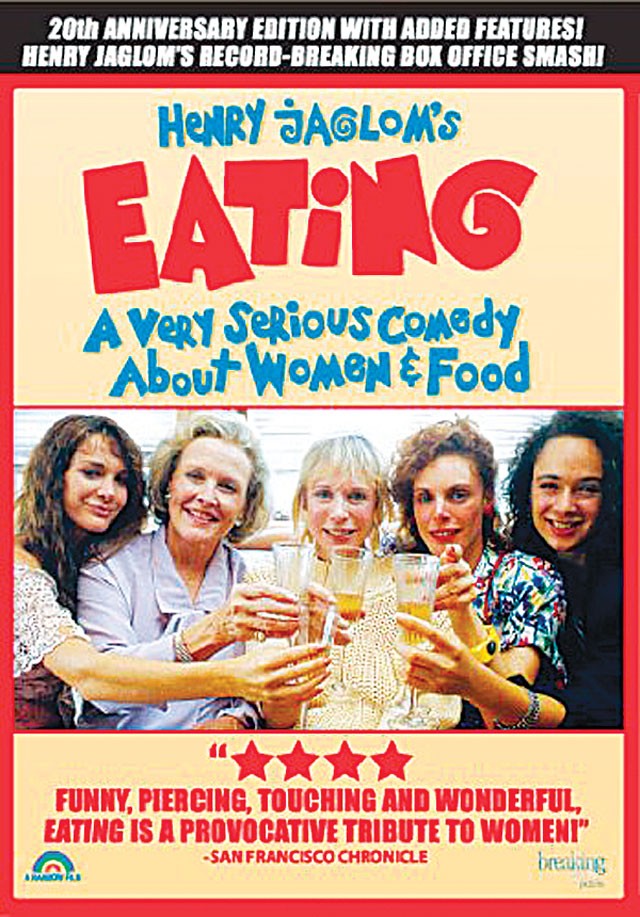 Does a “very serious comedy” about the frequent war between women and food hold the same relevancy today as it did upon its initial release in 1990? Unfortunately, yes. And that sad fact makes Henry Jaglom’s film on the subject required viewing.

Centered around a shared birthday party, Eating explores the troubled intersection of bodies and food as Kate (Mary Crosby), Helene (Lisa Richards), and Sadie (Marlena Giovi) celebrate turning 30, 40, and 50 years old, respectively. Helene’s French amie Martine (Nelly Alard) utilizes the event as an opportunity to interview the attendees for a documentary on the subject in an effort to exorcise her own gustatory demons. What emerges is a series of vignettes wherein women detail their struggles with food.

The friends’ discussions range from eating disorders to body image issues to problems of physical fulfillment (one woman, in a heartbreakingly comical admission, expresses her longing to encounter a man who could excite her “as much as a baked potato”). Behind the humorous discourse lies the touching nature of this film. In an effort to have the perfect bodies, some admit to starving or purging in their quest to stay thin. Another expresses her desire for another’s legs or shoulders, even as the envied woman depreciates her own admired body parts as unattractive.

While the women’s anxieties appear genuine, they are frustrating in their repetition, with only Helene’s wise mother Whitney (played by Frances Bergen) acting as the voice of reason in the discourse. Yet even Whitney’s guiding influence falls short when she advises her daughter to “stick it out” after she discovers her husband is having an affair.

Is society any better 20 years later? There is a greater acknowledgment of the struggles of body image, but this awareness has not necessarily led to accepting our bodies as imperfect and unique. If this film can help women confront and conquer their skewed self-images and greet food as friend rather than foe, then I will bring a cake to the celebration. Low fat, of course.