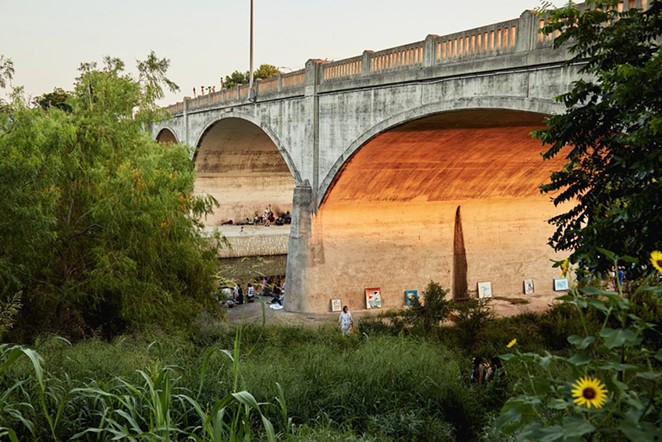 In most cities, what happened on July 25 under the Roosevelt Avenue Bridge would have been the end of an ad hoc, unlicensed project like the Echo Bridge Appreciation Society.

The group was setting up on a platform beneath the South Side bridge—also called the Mrs. Frank W Sorrell Bridge — across the San Antonio River from another wide platform where an audience would begin gathering closer to dusk. The San Antonio River Authority shut the event down before that could happen, citing that the event series, which had been growing by word-of-mouth promotion with a series of monthly-ish public concerts since March, was unlicensed and therefore illegal.

What happened next is puro San Antonio.

The river authority proactively reached out to the nearest business, popular community hangout Tandem, 310 Riverside Drive, who sent them to Jeff Wheeler, one of the event’s co-organizers. Wheeler is the director of SPACE C7, an art gallery inside the South Side Living & Maker Spaces across Riverside Drive from Tandem. His partner in the Echo Bridge gig series is Justin Parr, who has run Fl!ght Gallery in the Blue Star Arts Complex since 2001, and is the resident caretaker of Hot Wells, about a mile farther down the river from the bridge.

At the authority’s prompting, the duo put together an application package and got near-instant approval. “They were just beyond nice and understanding,” Parr told the Heron at the Echo Bridge Appreciation Society’s first above-board event, a performance by San Antonio musician and frequent San Antonio Current contributor Bill Baird on August 29. 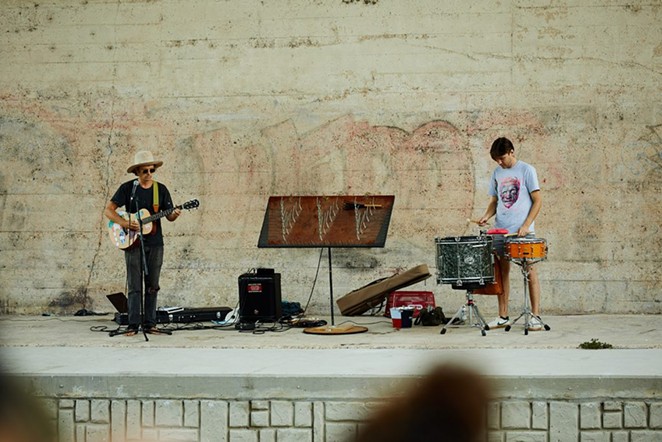 “They made a permit for us where there was none,” Wheeler added. “They understood that it was community-driven and that people love it already. And it was just really amazing how easy they made it. … They just walked us right through it, and before we knew it, we were legal.”

On August 29, there was a print-out of the river authority’s official approval on hand at ticket check, and the show went off without a hitch. It was Baird’s second time playing the venue, and he came prepared with a few creative solutions to bridge the acoustic gap that exists between the performer’s side of the river and the audience’s. He began on the audience side, directing everyone to scan a QR code inside the evening’s program, which pointed to a processed, droning field recording he’d made of the bridge’s loud summer cicadas. (These cicadas arguably dominated the mix at a July show for avant-jazz artist Sam Gendel, but it was a pleasant mix.)

Everyone’s pocket speakers thus activated, Baird had a Stygian figure paddle him across the river. This Charon figure was there to reflect the art for Baird’s new album Dead Man. The paddle-boat reaper also held an acoustic guitar and added a floating sonic point to the performance that bridged the challenging river acoustics in an interesting way. 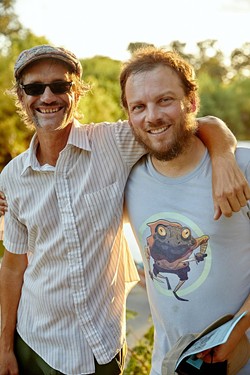 Parr and Wheeler met on a camping trip in Big Bend, and became collaborators after Wheeler moved to San Antonio in 2019. Parr is a local; Wheeler grew up in the “Land of the Allsups,” he explains: small towns in the flat country around Lubbock. He made the move to San Antonio from Lubbock via a year-long art residency in Croatia, and is a key part of the South Side Living & Maker Spaces.

That venue is a project by James Lifshutz, developer of the Blue Star Arts Complex. Lifshutz also donated land to and owns property around the Hot Wells county park. He got the green light from city authorities to develop a spa facility at the site last August, and advanced a plan for its development the following month.


The seed for the Echo Bridge shows came from a pop-up event Parr organized in March 2019 via Fl!ght Gallery, called Fl!ght Camp. It involved bringing some pianos down there, and organizing a midnight bike-ride and impromptu performance under the cavernous echo. Wheeler was in attendance, recalling, “That lit the fire for me.”

The Echo Bridge format as it lives now was born during, and perfectly suited to, the onset of the pandemic. At first it was ticketed by pods of 2-3, with social distancing a built-in assumption. From the beginning, all ticket money raised has flowed directly to the artists.

Once the basic structure was in place, Parr and Wheeler enlisted Erik Sanden of local art rock band Buttercup, who played the first “official” (if not strictly legal) Echo Bridge Appreciation Society show on March 14. Sanden was joined by claire rousay, a percussionist and an experimental composer who has garnered national coverage, including a recent New York Times Style Magazine profile.

Since then the bridge has hosted an eclectic mix: Ojai-based outsider country artist Austin Leonard Jones; local favorite Garrett T. Capps with Austin-based singer, composer and multi-instrumentalist Lindsey Verill; and Bob Livingston, the San Antonio-born, Lubbock-raised troubadour who pioneered what’s been called the “cosmic country” sound with his legendary group, the Lost Gonzo Band. Livingston, now 72, is still in the middle of a long-running solo career that’s brought him to more than 25 countries in Europe, the Middle East, Africa, and Asia as a State Department-sponsored ambassador of American music.

His Echo Bridge performance was a standout for both organizers. “He just really brought it. It was a beautiful evening,” Wheeler said.

Parr added that Bob Livingston had a natural command for the space that one can only learn from playing every kind of room imaginable, for decades. “You can [always] tell [during] that first song, they’re feeling it out,” Parr said of the general flow of Echo Bridge concerts. “Some do more research than others, some come down here. But with an audience, you can tell how people adjust in those first few songs. … But Bob came out, and he just was like … [starts singing loudly]. Just owned the space, tossed his sound around. To me, he showed us all how it should be done.”

What changes now that Echo Bridge isn’t a fly-by-night operation?

“I gotta admit, it was fun being pop-up, and kind of on the edge too, and getting some street cred,” Wheeler said. “But it feels good to be on the other side of it and have (river authority) behind us.” 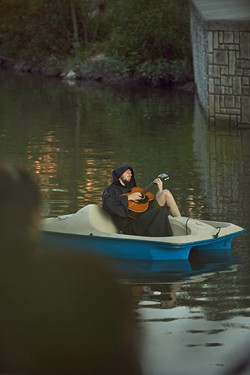 One hope for the future is to attract more seasoned, well-known performers like Livingston, who could cover expenses with a club gig and pop up at the bridge for an acoustic Sunday evening set. As the weather gets cooler, the cicadas quiet down and the mosquitoes go dormant, there’s a lot of potential for an autumn slate.

For now the Echo Bridge concert series will roll out at a pace of about one every two weeks, with Parr and Wheeler committing to it remaining totally not-for-profit, with every ticket dollar donated directly to the night’s performers.

“We want people to come down here that might not be familiar with who’s playing, but we want them to have the impression that it’s gonna be a good show,” Parr said of the overarching goal for the future of the series. “It sort of has the feel of a listening room. Everybody just gets quiet and listens to the show.”