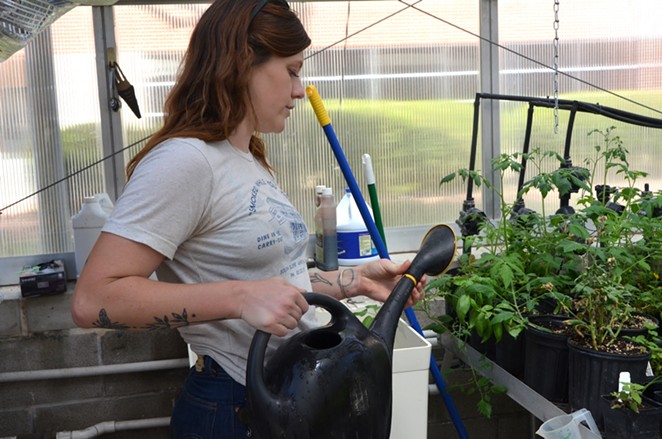 Growth of global food production will need to increase by 25 to 70 percent by 2050 to meet population increases projected by the United Nations. And, for San Antonio, a city with some of the highest food insecurity rates in the nation, according to federal statistics, that means changing our food production methods and perhaps even our cultural identity.

The issue hits especially close to home for the center. It’s estimated that one in two community college students will experience food insecurity during a semester, and that rate is even higher among SAC students.

“Imagine passing fruit trees on your way to class and being able to pick [fresh fruit],” Eco Centro Director Meredith Miller said of the scenario she’s trying to cultivate. “You’d have your snack on your way to class, and then after class there’s a produce box available for you to take home, with recipes and nutrition information, and access to a public-health nurse if you need it.”

Since its 2014 inception, Eco Centro has become a San Antonio community resource like no other. The center, funded in part by a federal seed grant, regularly hosts free gardening events, offers meeting space for local organizations and invites students to connect with its mission to grow native plants and food. However, its goal of bringing sustainable farming to the urban core is in step with other initiatives around the nation.

Similar to the Sustainable Food Center in Austin, Eco Centro wants to establish itself as a core part of the regional food system. SFC partners with local farmers and federal food programs such as Women, Infants and Children and Supplemental Nutrition Assistance Program, or food stamps, to expand access to nutritional education and healthy, affordable food.

Within the next five years, the center plans to transform 75 percent of SAC’s campus landscaping to include native plants and habitats for wildlife and pollinator species such as bees and butterflies. What’s more, it wants on-site gardens to be productive enough to feed students, faculty and staff.

Around 10 percent of the project has been completed to date, and the team is putting together the research, strategies and partnerships to meet its full goal.

Eco Centro has already cultivated a total of 8,500 square feet of garden space that includes vegetable patches, native plants and an urban farm. Some of the areas are child-friendly.

In addition, the campus now includes so-called food forests, or areas that offer multiple layers of food production. Passersby might see a cluster of trees, bushes and a manicured garden, but together the same mini-ecosystem can yield citrus varieties, black berries and herbs. It also offers space for the birds, bees and butterflies that help pollinate vegetation. Planted fruit trees are expected to begin producing by late spring.

“We wanted a space where people and classes could come and sit, where people can come and study — and a space for the bees, the birds,” Miller said. “A food forest allows us to [do] that… the idea is that there are many spots all around campus so that wherever you go, there’s food production happening.”

On a walk across campus, it’s hard to miss the changes the program has already brought to the landscape.

The Arroyo, a 3,500-square-foot green space once prone to flooding, now offers a community garden and food forest with low-impact stormwater landscaping. A nearby greenhouse allows staff and students to grow sensitive plants like succulents and tomatoes.

A garden near the Loftin Student Center features 1,800 square feet of pollinator habitats and herbs like sage, thyme and chives, while the 1,150-square-foot garden outside the Victory Center includes native and water-wise plants along with another pollinator area. Plans are in the works to expand the latter garden by several hundred feet.

Cecile Parrish, Eco Centro’s urban farm manager, said putting fresh produce in the hands of students is vital because so many don’t have access to it elsewhere.

“The true cost of food is such a mess,” she said. “For how amazing and wonderful it is that we do have these farmers markets, those aren’t accessible spaces. We’re [discussing how we can] support community agriculture so that people that might not be able to afford [healthy foods] can access them. Farmers all want to feed people, they’re not trying to make it exclusive to the Pearl demographic, but they’re not getting the money they need, so they have to charge more.”

To that end, Eco Centro will launch a market at SAC later this year, providing campus-grown foods and flowers to benefit the center and help it add programming.

“The food will be free to students and at low-cost for faculty,” said Ariana Fuentes, Eco Centro’s farm and garden manager. “That’s what I’m most excited about. There’s so many more possibilities with this.”

Just as Eco Centro benefits from its centralized location within San Antonio, SAC students said they benefit from their proximity to the burgeoning outdoor classroom. 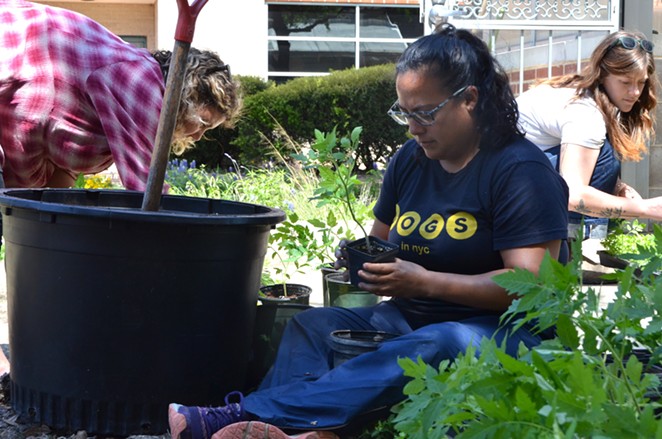 And SAC is part of the Alamo Colleges District, which makes the gardens ripe for potential partnerships with other campuses. Palo Alto College offers landscape and horticultural sciences, for example, while St. Philip’s College boasts a renown culinary program.

“It’s been amazing to see the growth, just in the time I’ve been working here,” said Francisco Hernandez, a SAC student who’s spent a year with Eco Centro’s work-study program.

Beyond its Alamo Colleges reach, Eco Centro is scaling up its local impact through partnerships.

The center has become a meeting hub for organizations including the Food Policy Council of San Antonio (FPCSA). Other regional stakeholders — farmers, food producers, business owners and political groups — also meet there to discuss sustainability issues, including how to address climate change and eradicate food deserts.

“Eco Centro’s [impact goes] far beyond San Antonio College,” said Mitch Hagney, president of FPCSA, an organization devoted to improving food affordability and access. “If you were curious about permaculture, rainwater harvesting or solar energy, the Eco Centro space and its staff function as a liaison point to connect you to all of the other resources in the city.”
Parrish, the center’s urban farm director, said the center can help local organizations expand their reach.

“There’s a lot of cool stuff happening in the city, it just tends to happen in silos,” she said. “So, we’re trying to be one of those connectors for the community.”

The Eco Centro team began with Miller, the director, but has since grown to include four full-time employees, six part-timers and a handful of student employees and contractors. Staffers also work alongside community, student and military volunteers to break ground, plant new crops and develop campus gardens.

The team is shaped by the staff’s diverse health and agricultural experiences, Miller said. While the group has created partnerships as far away as Mexico, its primary focus is on meeting the needs of the San Antonio area.

“We’ve been so busy identifying and addressing local needs, that we haven’t been able to think really big yet,” she added. “It’ll come as we get rooted.”

However, there are already signs that those roots are spreading beyond the SAC campus.
The San Antonio Housing Authority (SAHA) is expected to break ground on a new SAHA urban garden and farm on the East Side this spring. Eco Centro is among the partners in the project, which is designed to improve food access and education.

The new farm will help make up for the dearth of fresh produce available in some East Side neighborhoods. It will also offer an incubator space that pairs expert farmers with residents of all ages to improve food knowledge and inspire new sources of production.

Miller said she hopes Eco Centro can continue to play a part as similar projects sprout up around the community. Local food production, protected natural resources and agricultural gathering spaces help define a city and its cultural identity, she added.

“Anytime people try to talk about tacos in Austin, we laugh hysterically because we know what’s [existing] in San Antonio,” Miller said. “We need our community to have just as strong [an identity] when it comes to urban food production. [If we are part of those] centers in every neighborhood and every part of San Antonio, we create sustainability, we create community and create culture.”