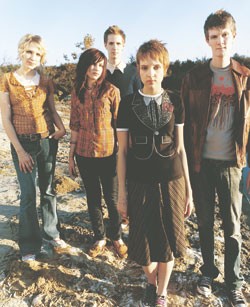 
Eisley is the most famous product of Tyler since Earl Campbell, and unlike Campbell, the group has attained renown without having to pulverize any NFL linebackers.

A family band composed of three sisters, a brother, and a cousin, Eisley is a demonstration of what happens when small-town church kids with musical parents start playing and singing at adolescence. You can call them Texas von Trapps or modern-day Osmonds, but they’re really a hybrid borne from their parents’ decidedly soft-rock, 1970s record collections, and the kids’ modern-rock inclinations.

Eisley mom Kim DuPree has revealed that she and her husband regularly blasted Carole King, Fleetwood Mac, and James Taylor around the house, and you can hear echoes of those influences in the impeccable harmonies and jangling guitars at the heart of nearly every Eisley tune. But you can also pick up the heavier, more abstract influence of bands such as Sunny Day Real Estate. Like their most obvious predecessor, Sixpence None the Richer, the DuPrees are open about their faith, but tend to frame it in cryptic metaphors on songs such as “Invasion” and “Many Funerals.”

They developed their sound (when little sister Stacy was only 8 years old) at BrewTones Coffee Galaxy, a music venue created by their parents at their Tyler church locale, and within a few years they were signed to Warner Bros. and opening for Coldplay. Walking a fine line between slick, pop accessibility and the underground respect they crave, they threaten to satisfy no one. But that’s a dilemma that Christian rockers grapple with every day. 8pm Friday, May 23, White Rabbit