El Ceviche de Waldito's chef is happy to meet you 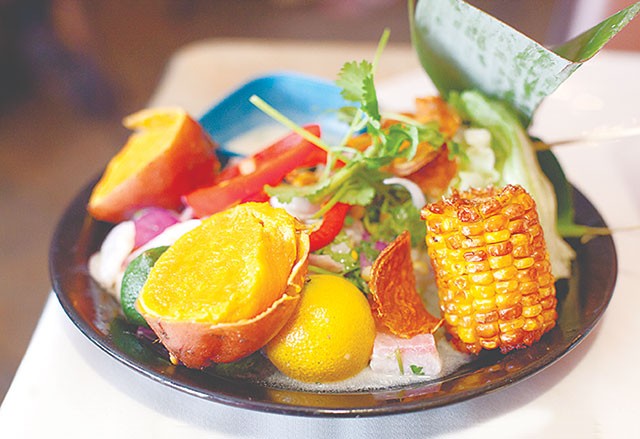 Texans are fond of saying about each other, “He never met a stranger.” Well, native Peruvian Waldo Castro, chef and owner of this small restaurant just north of Loop 410, fits the description perfectly. A gregarious guy who started washing dishes in Miami 30 years ago, Castro made his way through top hotel dining rooms (Hyatt, Hilton, Sheraton) as an executive chef.

He arrived in S.A. in 2009 to run the restaurant at the Crowne Plaza Hotel in San Antonio. Three years ago he and his wife Josie set up shop on a busy stretch of Evers Road with El Ceviche de Waldito and a catering business, Divine Taste.

The 14-table restaurant is modest but comfortable; Latin music plays in the background, softly enough not to interfere with conversation.

Castro’s trademark is definitely his greeting style. Unlike many chefs who stay in the kitchen, he constantly welcomes customers, newcomers and regulars alike, updating them on the menu. Back in his hotel days, Castro says he took heat from managers for going into the lobby to chat up guests.

Though from Peru, Castro casts a wider net for Latino culinary traditions stretching from the Caribbean through Latin America. For his lunch buffet (a great bargain at $6.99 with hibiscus tea and dessert), he starts with a trio of hearty sopas. We tasted all three, but returned for seconds on the seafood, a tasty rice-filled melange with small shrimp, bite-sized pieces of fish, and mussels (a mix which also reappeared in Castro’s paella). The chicken and beef soups are in a thinner broth but feature a robust variety of fresh vegetables.

Bypassing the basic salad of lettuce, tomato, and onions with a do-it-yourself vinaigrette, we went on to Castro’s main selections. Castro provides choices from behind the counter, explaining them in detail for diners unfamiliar with the cuisine.

Although there was no ceviche that day (!), we filled ample plates with Castro’s tamales, also known as humitas or montucas, depending on where you get them in las Américas. Filled with beef and wrapped in banana leaves, they were delicious. We had arroz con gandules (fried rice with pigeon peas), tostones, twice-fried plantain slices, sautéed bananas on the side, and rounded out our plates with the paella, roast chicken legs, and ropa vieja pork, braised in a spicy tomato sauce. We barely had room for dessert, but the bite-sized pieces of sweet flan were worth the effort.

Back for a second visit, Castro greeted me as an old friend. When asked if he had ceviche today, he explained that rising prices for fresh fish were forcing him to serve it only as a menu item, not part of the lunch buffet. The delicious seafood soup had more veggies and fewer pieces of fish than last time.

After happily indulging myself in several pieces of roast chicken with a rich crema de recoto (a spicy red pepper sauce), I mentioned to Castro that I was planning a simple pork roast for dinner at home that evening. He promptly seated himself at my table and, using a red cloth napkin, demonstrated his recipe for a rolled roast stuffed with sauteed onions and spinach, walnuts, cheese, and red peppers. Making sure I fully understood, he took me back to the kitchen and, with a large plantain in place of the pork, showed me how to tie it with notched potato slices to hold the string in place and keep the melted cheese from running out.

Dinners are a tad pricier than the buffet, but pork and chicken entrees are only $7, while seafood platas that can be shared with two people are $13. As El Ceviche de Waldito holds no liquor licenses, beer and wine-loving guests should plan to BYOB .