El Ten Eleven Learns to Play With Others 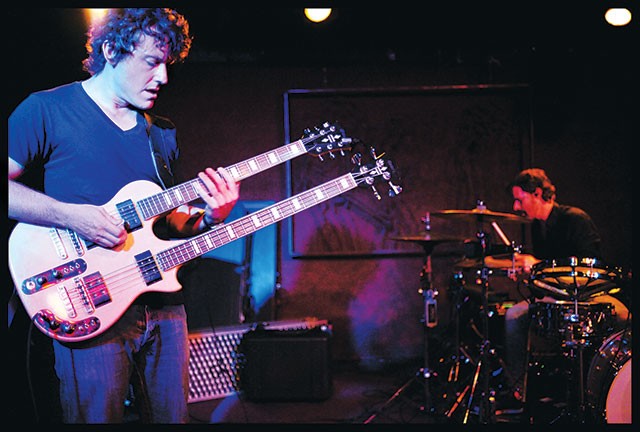 Hey, guess what, everybody? Kristian Dunn, bassist/guitarist for Los Angeles’ El Ten Eleven (no relation to the music venue on Avenue B), thinks his band’s latest album, Transitions Remixed, is pretty boss.

“I was really surprised at how much I loved that record,” he says. “It really went beyond my expectations. I’m kind of, I’m a little bit obsessed with it. I find myself trying not to listen to it.”

OK, I admit that quote is taken almost completely out of context. Here’s the backstory: El Ten Eleven, an instrumental duo consisting of Dunn and drummer/drum machine programmer Tim Fogarty, specializes in melodic, lush, cyclical soundscapes perfect for, say, soundtracking a documentary about the font Helvetica, which they totally did. Their music has no lyrics at all, but Dunn and Fogarty contend 2012’s Transitions is an incredibly intimate album, chronicling the major life changes suggested by the title — marriage, divorce, the birth of a child, all things Dunn says he can hear when he listens to it.

“I don’t really listen to it anymore,” Dunn says, “because I’ve heard the songs so many times, I’ve worked on it so much I’m like, ‘OK, I’m ready to move on to the next record.’”

“It’s kind of other artists’ material, in a way,” he says. “It’s so fresh to me because I didn’t have to go through that whole process of putting the songs together.”

There’s the context that lead quote needed. Also consider that Remixed marks the first time that Dunn and Fogarty, who normally create music in a closed circuit, let anyone else into the loop, and they did it with their most personal album to date. Dunn says much of the record’s fascination lies in the reinterpretation of these songs that have so much private meaning for him, like letting strangers create collage art with your Facebook posts.

“It really was personal, it seemed to me, from each of them,” Dunn says, “because they changed the songs so drastically from their original forms.”

If obsessively listening to remixes of your own songs still sounds vain to those of you who made it to the end of this article without Instagramming a selfie, maybe this will help endear Dunn to the rock purists out there: Remixed or not, when he takes the stage Dunn will be holding a guitar (a double-necked bass/guitar contraption, to be precise), not a laptop.