February 22, 2011
comment
In the excellent Westway to the World, a Clash documentary directed by Don Letts, bassist Paul Simonon recalls the music his brother would listen to in the '70s. “He’d listen to stuff like Yes, with birds chirping,” he said, “and I would go, ‘God, what are you listening to?!” He could have been speaking about Emerson, Lake & Palmer as well. The British trio (Keith Emerson on keyboards, Greg Lake on bass/guitars and vocals, and Carl Palmer on drums) were the first commercially successful progressive supergroup. They’ve sold more than 40 million records and, in the '70s, only Led Zeppelin attracted more fans in concert. Today, except for diehard fans, they’re all but forgotten. With all due respect to the New York Dolls and the Ramones, I boldly declare: without ELP, there would be no punk. Strictly from a musical point of view, that so-called punk DIY rebellion we all talk about was a direct reaction to the opulence and virtuosity of groups like ELP, which only needed three guys to produce fireworks with such a level of musicianship that it was impossible to reproduce by anyone else. I understand the critics, though. In the middle of this live version of “Karn Evil 9,” Carl Palmer starts one of his trademark solos and goes on forever. When you think he’s about done, he starts playing symphonic gongs. By the time he ends up playing a bell with his teeth, I was thinking of Christopher Guest in This is Spinal Tap. But I couldn’t take my eyes off Palmer. Or look at the flawless, highly complex interplay between Emerson and Palmer in this excerpt from ELP’s Mussorgsky recreation (Pictures at an Exhibition). Impressive, yes, but how long can you sit in awe of these guys? That’s the great thing about punk music: it was a way to say “Forget about this shit; I can’t play, but I’ll play anyway.” ELP could slow down, too; they recorded successful, radio-friendly pop gems like this one: When I grew up, walking with a vinyl copy of ELP’s Trilogy under the arm was a sign of sophistication, a declaration of principles. “This is what I listen to. Don’t bother me with your crap.” Today, even musically knowledgeable young people I talk to don’t have a clue about who or what ELP is, and that’s a shame. But the P in ELP hasn’t gone anywhere, and now Carl Palmer is back with an instructional drum DVD, which was an excuse to talk on the phone to one of the greatest early drum heroes in rock history. 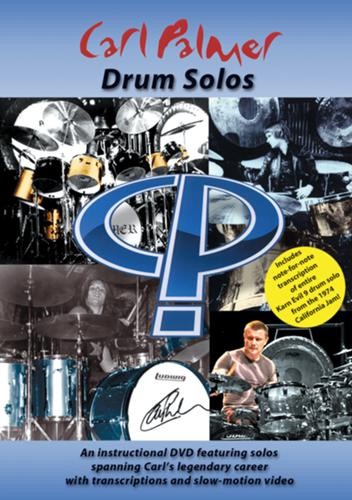