Employers Push To Get SA Millennials Into Blue-Collar Trades 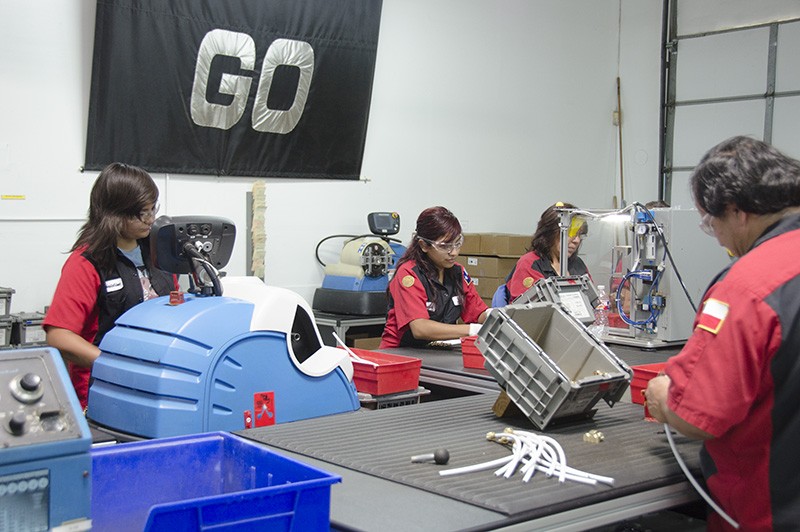 It's hard to imagine the city ditching its blue-collar roots.

Just ask Rey Chavez, president of the San Antonio Manufacturers Association. There are over 1,600 manufacturers in the Alamo City. Yet he has growing concerns over meeting future workforce demands.

Chavez said their workforce is getting older and there aren't enough youngsters to replace them.

"I have employers who are 75 years old and 80 still working," Chavez said. "[I ask] Why are you doing this? Why aren't you playing golf? Playing with grandkids, great-grandkids? 'Can't. There's nobody that can replace us,' they say."

And it's not just manufacturing. Leaders in fields such as construction, plumbing and carpentry are also worried. Many members of their aging workforce are ready to hang up the work belt, but there aren't enough young workers with skills to replace them.

"The people who are my age are retiring. There's a void in the pipeline. You turn on the water and nothing's coming through," said Michael McIver, vice president of manufacturing at Pressure Systems International, a San Antonio-based manufacturer of truck tire inflation equipment.

Many of these jobs actually offer good salaries. Plumbers and electricians in Texas make about $45,000 a year, according to the Bureau of Labor Statistics. Others, such as aircraft mechanics, average closer to $60,000 — not including benefits.

There are a number of reasons for all the talent drought: a decades-long push to route high school students to go to college, the social stigma attached to blue-collar professions and the disappearance of shop classes have all played a part.

But whatever the reasons, experts and industry members agree that moving more young people into blue-collar jobs is critical to the San Antonio economy.

Richard Butler, a professor of economics at Trinity University and former head of the Alamo Area Academies, a non-profit job skills program, said that recruiting new blood to skilled trades is a market necessity.

"It's really pretty darn scary," Butler said. "Regions that set out to create skilled workforces will be the ones where the high-paying jobs are going to go. If we don't create that workforce ... we won't have those jobs."

The program offers training to high schoolers in industries such as aerospace engineering, heavy equipment operation and manufacturing. Students participate in paid internships, earn credit toward college or professional certificates. Some even net job offers right out of high school — all free of charge.

Still, recruiting was an "uphill battle" at the start, as Bowman tried to sway parents and high school counselors determined to send every kid on a path toward a bachelor's degree.

"That was pretty much the mantra," Bowman said. "Everyone should go to college. Everyone is going to graduate from college in four years. They're going to become a CEO and they're going to be making six figures overnight."

There are certainly advantages to earning a four-year degree. Bachelor's degree holders experience lower levels of unemployment and tend to make more money than those with associate's degrees or lower in the long run.

But mountains of debt often accompany such advanced degrees, with no guarantee of a full-time job. Almost half of all bacherlor's degree holders in their 20s are underemployed, meaning they are working jobs that don't actually require a degree, according to the Federal Reserve Bank of New York.

"It's a terrible culture to cultivate," said Bowman. "I'm not trying to be facetious, but ... companies like Toyota can't find the necessary skills to produce enough Tundra trucks for people who want to buy them."

Manufacturing was the only sector of the San Antonio workforce whose population decreased between April 2014 and April 2015, according to the U.S. Bureau of Labor Statistics.

Another problem is the stigma attached to blue-collar jobs — they're often perceived as physically taxing, too simple or less important than gigs requiring a bachelor's degree. 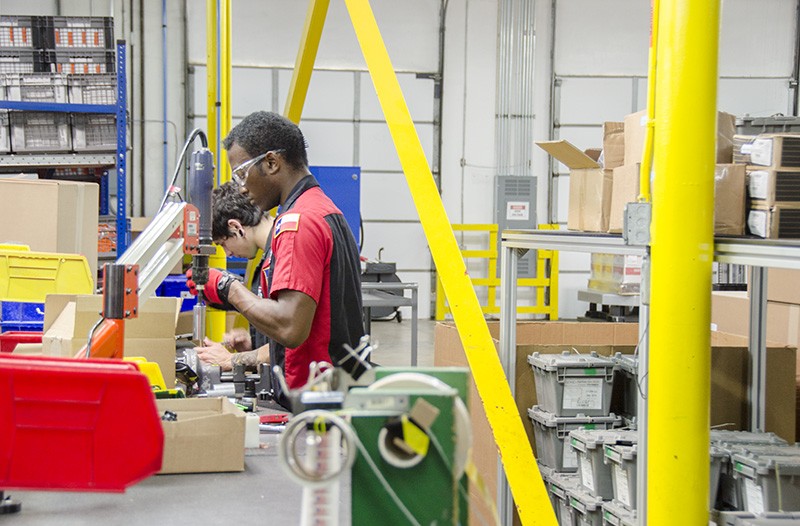 Employers list shaking that impression as one of their chief challenges in attracting young talent.

"It's an image issue," said Chavez. "A lot of folks probably think it's shoveling coal into a furnace. It's dirty. It doesn't pay a lot of money."

It may seem as unfair, but it's a notion that Frank Southers, who runs the apprenticeship training program at Local Union 142, combats daily.

The union's membership encompasses a range of trades such as plumbing, pipefitting, HV/AC repair and welding.

The apprentice program, which lasts five years, is free. Apprentices attend classes for four hours twice per week on evenings and work in their trade full-time during the day.

And they actually come out ready to earn good money. Yet Southers lamented he has trouble recruiting.

"There's no other place in this town where you can go to school for free two nights a week for five years and come out making $30.40 an hour ($63,232 a year). Why do they not see it, I don't know," Southers said. "Somebody has to put the bridge together, somebody has to put the piping system together. We have to make it interesting."

The average age of a plumber in Texas is in the upper 50s.

Lacey Crockett, 20, just completed her first semester as an apprentice plumber. The San Antonio native never considered plumbing as a profession in high school, but now she loves it — particularly the opportunity to solve problems each day.

"It's just one of those things I never thought about," Crockett said. "I know I've got a lot to learn ... but I just want to build upon it."

There are some signs that more young people could see what Crockett sees. And some employers have taken matters into their hands to bridge their talent gap.

McIver is working with Workforce Solutions Alamo, a career resource center, to develop a training curriculum specifically for the needs of Pressure Systems International. The company recently purchased new, more advanced equipment, but desperately needs younger people who know how to operate it.

"It creates a dilemma for me because as the tooling gets more technical, I don't have the workforce. I'm creating a problem for myself. I see this problem existing for 10 more years," McIver said.

There are also city and state-sponsored programs to address the problem.

San Antonio, in partnership with several sponsors including Alamo Area Colleges, recently launched a job training program for 300 East Side residents through the Promise Zone to Work initiative.

The initiative offers free training in trades such as heavy equipment operation, manufacturing and information technology with the promise of job placement after completing the program.

The initiative is part of the broader Promise Zone program, a federally-backed project to help reduce poverty and expand economic and educational opportunities in select neighborhoods across the country.

High school students in the Promise Zone have had the first crack at the 300 slots. At a recent orientation at Sam Houston High School, more than 60 students signed up for the program.

Mayor Ivy Taylor, the daughter of a printing press operator, said at the program's kickoff that the idea is to lay "the groundwork to ensure that these industries have a steady flow of well-prepared individuals for current employment needs in San Antonio."

Robyn Corbett, 27, signed up for one of the Promise Zone to Work slots to study information technology. She said she was intimidated at first by the challenge of learning a new skill — an unfounded fear keeping many of her peers away.

"Some of them are maybe afraid to change their status quo. They probably think that they can't do it," Corbett said.

On the state level, others point to a piece of legislation that Texas lawmakers approved in 2013 as a key piece to moving young people into skilled trades.

The measure dramatically altered the structure of public education in Texas. It provided students with multiple paths to graduation, including tracks for technical skills, which schools had neglected for decades.

"If you want to go to college, if you want to learn a skill — it didn't make one better than the other, it just raised awareness," Bowman said.

He said that since the law was enacted, his program reached full capacity — with a waiting list — for the first time ever.