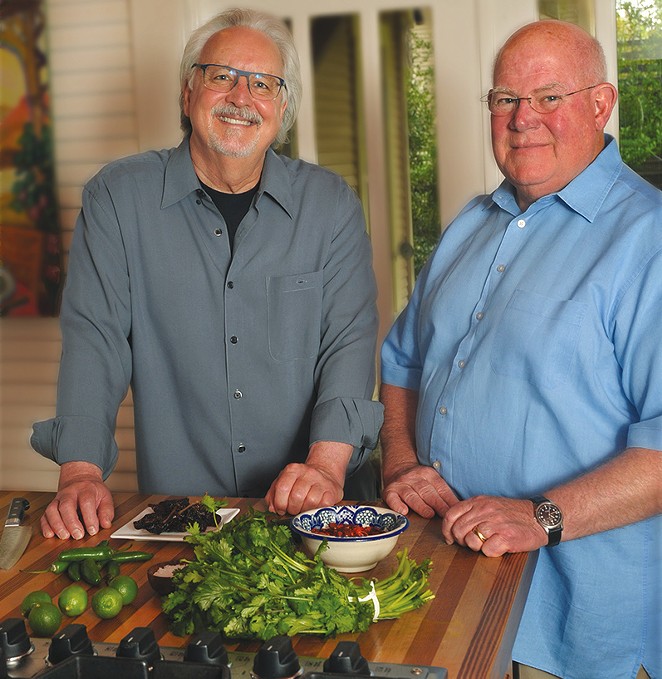 Your cookbook collection is due for a new addition with this culinary tome centered on a subject most San Antonio residents are intimately familiar with. In Enchiladas: Aztec to Tex-Mex, published by Trinity University Press in San Antonio ($39.95), authors Cappy Lawton — owner of Cappy's, Cappycino's and La Fonda on Main — and Chris Waters Dunn try their hand at preserving and honoring this staple of Mexican cuisine.

Lawton, a restaurateur for the past 42 years, and Dunn, a former songwriter/record producer from 1978 through 2005, who graduated from the Culinary Institute of America in 2006, knew they had their work cut out early on. The pair, who live within three blocks of each other, met through a mutual friend. Though Lawton had previously tried working on a cookbook about the history and food of Cappy's, he shelved the project after too many hiccups. When Dunn suggested they work on a book together, Lawton already had enchiladas in mind.

"I, for a long time, have been amazed that there's not been a major book, ever, on enchiladas. I have just about every modern Mexican cookbook there is because of the restaurant and my interest in Mexico," Lawton said, while Dunn added: "We couldn't believe there had never been a book solely dedicated to the topic of enchiladas."

The duo took the next two-and-a-half years to turn their vision into a reality. This involved going back to basics with recipes that will eventually help home cooks realize enchilada dreams from start to finish.

They tapped a team of helpers, who contributed to the book. From brainstorming recipes to finding the right flavor profile for others, the pair was aided by executive chef at La Fonda On Main, Victor Maldonado; executive chef at Cappy's Gabriel Ibarra; general manager Ceasar Zepeda; and chef Iliana de la Vega, formerly with the Culinary Institute of America and owner of El Naranjo in Austin, among others.

"We were pretty diligent. We had a meeting every Wednesday for about a year," Lawton said.

Enchiladas: Aztec- to Tex-Mex includes 100 recipes with more than half devoted to enchilada assembly. The book is broken down into three parts — Ingredients, Fundamentals and Recipes — each filled with photos of enchiladas from across South Texas and Mexico.

In Ingredients, Lawton and Dunn dive into the chiles, tomatoes, onions, avocados, nopales, huitlacoche, Mexican chorizo, cecina (or dried beef), Mexican cheeses, crema Mexicana and more. In Fundamentals, the book breaks down fire-roasting chiles, sides such as Mexican rice (five varieties) and how to poach chicken. The same portion of the book includes lessons on how to tackle corn tortillas from scratch.

"Cappy had a vision to really begin with corn. The corn made the tortilla possible and the enchilada inevitable in my opinion," Dunn said. "And Cappy knew the cultural significance of corn in Mexico – sin maiz no hay paiz."

Recipes are easy enough to follow and include a sizeable portion of specials featured on La Fonda On Main's menu. You'll find enchiladas de camote (sweet potato), a favorite of Lawton's, alongside enfrijoladas al estilo de Oaxaca, a favorite of chef Maldonado, dating back centuries. Entomatadas, both with and without chile, are another highlight, along with two recipes for enchiladas Suizas. The first was invented in 1950 inside Sanborn's, a famous restaurant in Mexico City, followed by La Fonda's take that piles on pepitas for a nuttier flavor.

Enchiladas: Aztec to Tex-Mex has legs — it could essentially help spread the gospel of enchiladas callejeras, or Tex-Mex, across the country. The two self-proclaimed "bolillos" behind it are fully aware of the heft of this project.