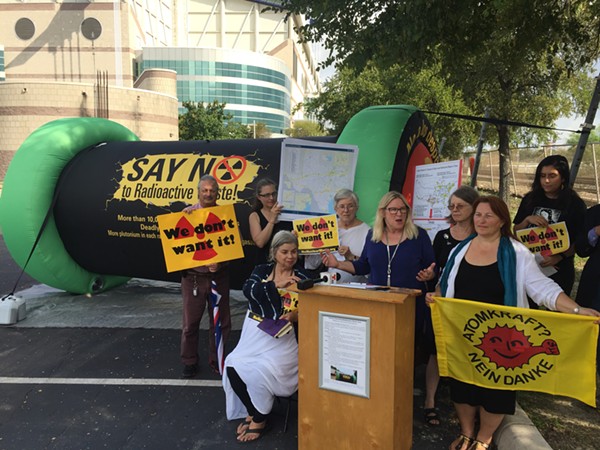 Environmental groups on Wednesday spoke out against a plan to ship waste from nuclear reactors through San Antonio and other Texas metros on its way to a storage site near the New Mexico border.

If approved by the Nuclear Regulatory Commission, a project by Interim Storage Partners — a partnership between Waste Control Specialists and Orano USA — would ship 40,000 tons of irradiated fuel rods from reactors around the country to West Texas' Andrews County.

"This is the hottest kind of radioactive waste," said Karen Hadden, executive director of the Sustainable Energy and Economic Development (SEED) Coalition. "This is what they worried about at Fukushima [the site of the 2011 nuclear disaster in Japan]."

A coalition including SEED, Nuclear Information and Resource Services (NIRS), Public Citizen and others is taking a road show to Houston, Dallas and other Texas cities to build public opposition to the plan. Making the tour with them is an inflatable replica of a waste-shipping container.

With the Alamodome on one side and chugging trains periodically interrupting the news conference, coalition members took turns warning that derailments, mishandling or sabotage could put neighborhoods or even whole cities at risk. Exposure to radiation can cause cancer, genetic damage and birth defects. Even brief unshielded exposure can be lethal.

The public has until Oct. 19 to file comments about the plan via a website set up by the coalition. Groups including SEED and the Sierra Club also expect to file lawsuits prior to the Oct. 29 deadline for court filings.

Both San Antonio and Bexar County have adopted resolutions opposing the plan, as have other Texas counties.

Interim Storage Partners were unavailable for immediate comment, but a FAQ on its website detailed the purported durability of its containers and strict federal regulations under which it operates.

"Being stopped next to a transport cask of used nuclear fuel, even for hours, would not expose anyone to a harmful amount of radiation – and likely not any more exposure than the normal background radiation amount for that area," the website said.

But the environmental groups argue the waste is more secure stored onsite at nuclear plants until the U.S. can develop a permanent disposal facility. The West Texas location, which could be approved as early as 2020, is only temporary and expected to last 40 or more years, according to Interim Storage Partners' filings.