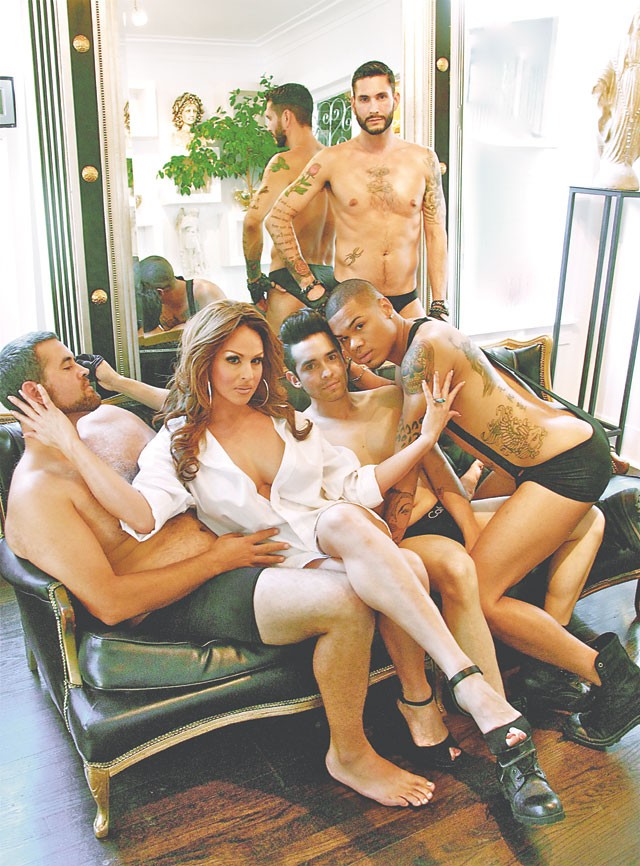 As she graces her way into the studio for her photo shoot, she steps into the room slowly, walking as if on freshly cut rose petals. Then she stops in the lobby, gazes around and slowly lowers her sunglasses to study her surroundings. Her regal presence is equally delicate and dominant. And even before meeting her, you can tell she has all the qualities of elevated rank.

She quickly took over the shoot and started directing the models to hold her, lift, and pose. I remember her grabbing an American and a rainbow flag, wrapping them both around her waist as a makeshift dress, and telling the photographer (me) “Start clicking that camera, babe.”

As we wrapped up the two-hour-long session, we sat down, and Erica Andrews — San Antonio’s premiere drag queen — told me her story.

It was 1989, and the San Antonio gay scene had a ruling drag queen by the name of Tandi Andrews. The Paper Moon and The Wild Club were her playground; Andrews owned the drag circuit.

The gay club world was smaller then, but growing. That year, Andrews and Raphael Velasco, manager of The Wild Club (later, owner of The Saint), discovered a new diva in town going by the name Erica Hutton. It was then that the ruling queen, realizing all her potential, asked the young performer if she would be her drag daughter. This term was unfamiliar to her.

Erica states, “I was just so new to everything, I moved from Mexico to Laredo and then San Antonio … I felt like I was in New York.”

Tandi Andrews celebrated a resurrection of new life… and Erica Andrews was born. Erica didn’t just perform, she dominated the stages in the bars and clubs on the LGBT circuit, rising to become one of the most celebrated queens in the U.S. She held many pageant titles, such as Miss Gay USofA 1999; Universal Show Queen 2004, and was named Entertainer of the Year 2006, in Pattaya, Thailand. But the accolades didn’t go to her head.

“I owe all my achievements to Tandi and Raphael,” she told me. “They introduced me to the industry and showed me when to party, and when to get down to business and negotiation.”

Not only a celebrity in the gay community, she appeared on TV as a guest of Tyra Banks and Maury Povich (who hired her as a makeup artist). Her film credits include the documentary Trantasia and Israel Luna’s controversial revenge saga Ticked-Off Trannies with Knives. On stage, she was known for her impersonations of Jessica Rabbit, Joan Crawford, and Wonder Woman … these images are embedded in the memory of the SA LGBT community.

Her reign ended on March 11, 2013 in a Chicago hospital. Erica Andrews (born Eddie Salazar) was surrounded by family and friends when she succumbed to a lung infection.

Mauro Garza, the owner of Pegasus, her last club home in SA, said, “I feel a huge obligation to uphold Erica's memory, to the other show-girls ... and the new LGBT community center is paramount!"

The Haus of Andrews pageant for aspiring drag queens held at Pegasus is her legacy. She had 29 drag children. She was a Civil Rights activist who was overjoyed by the up and coming SA Pride Center (LGBT community center). She showed us all how to walk without fear and judgment.

Erica once told me, “Always keep hard at your art. Malicious gossip can be the decimation of your career … so just don’t listen to it. And if you focus you can be an Andrews, in fact we all can be an Andrews!”