Even In The Dead Of South Texas Winter, Big Daddy's Eats & Treats Thrives 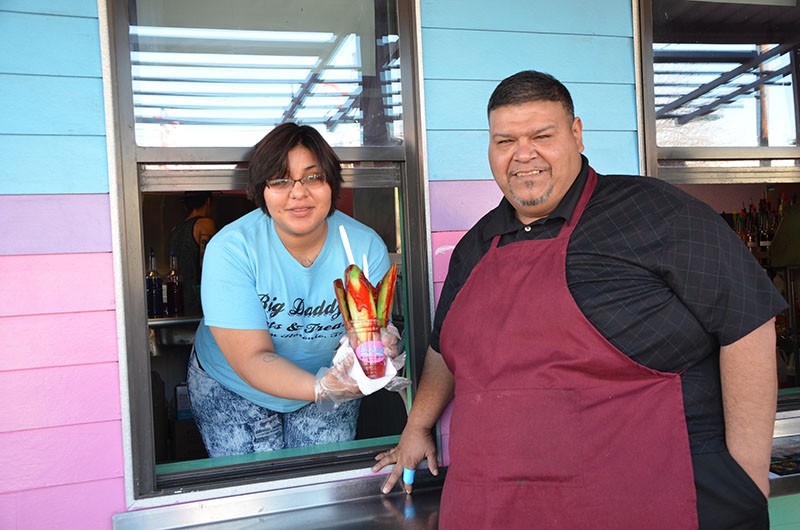 The idea of opening any sort of eatery or treat shop in the middle of winter seems, well, laughable. There's the matter of finding staff, training the crew, setting up shop and ultimately preparing to close on holidays as wintry weather finally makes an appearance. That wasn't the case at Big Daddy's Eats and Treats as dozens, if not hundreds, of raspa lovers have lined up to the new Cevallos location since its Thanksgiving weekend launch.

And they're not doling out hot foods and soups either. While those items do make an occasional cameo on the menu, the main affair and the reason for the long lines lies in Big Daddy's insane icy creations. They'll make mangonadas sound like a demure treat of yesteryear.

"Everything that we do, I saw someone else do in the Valley, we just put our own spin on it," says Jaime Morales, "Big Daddy" in the flesh.

Big Daddy's story began in July 2012. Morales, a former truck driver, was about to receive his last disability check from driving and needed to figure out how to make a living. He turned his attention to raspas and purchased a 1977 Dodge Sprinter RV with 77,000 miles and outfitted it into a mobile kitchen with the help of Andrew Olvera and eventually Roland Castillo.

The truck was a summertime hit at local parks ("We made our first $100 at MLK near Salado Creek," says Morales). It's easy to see why. The truck was cranking out mounds of fresh mango and strawberry sorbet, filled with salty Chinese candies, sour straws, generous dashes of Lucas and Kool-Aid, gummy bears, chopped dill pickles, and lest we forget, heavy drizzles of chamoy, a sweet and sour sauce made with pickled fruits and chiles. Lines have grown 100 to 150 people deep and you'll usually be in for a wait — sometimes even a few hours.

Morales has become the consummate business man, routinely checking social media for complaints (usually the wait), and sharing images and videos of the raspa movement. He's amassed more than 64,000 followers on Facebook and close to 12,000 on Instagram. Every drool-inducing pic, he says, is a jalon, or tug, at someone's sleeve. His staff has grown to 13 and counting. Employees work directly with customer suggestions to come up with tweaks to classics that inevitably turn into menu items. The pickle brine-soaked "cucumber hills" are a customer request, and a 19-year-old employee created the "Destiny's Child," a fruity concoction likened to Carmen Miranda in a cup.

"Jaime makes sure all employees are as creative as possible," Castillo says.

Giving folks what they want is one thing, but keeping everyone happy, especially with hours-long waits, is another.

But Big Daddy's customer service seems worth the wait for those in line.

"We could make the best product, but if you get to the window after a two hour wait and I don't treat you nicely, you're not going to want to come back," Castillo says, while Morales adds to the list of rules employees must adhere to: "Don't roll your eyes, don't raise your eyebrows."

The competition has also grown since those early days, but again, Morales has taken stock of social media turmoil and turned it into a positive.

"I learned silence is golden," he says.

The sheer volume of product they go through on weekends now compared to their early days is striking. Thirty cucumbers would have lasted a few days in 2012. Now, they're stocking 10 cases of 70 each to keep weekend crowds happy. The store alone — the RV is getting outfitted with stainless steel equipment — will go through 64 gallons of mangoes and another 64 of strawberries.

Still, Morales is not deaf to critics who argue the sugary and salty treats are too gluttonous.

"Por eso estoy como estoy," Morales jokes in Spanish. "It's freedom of choice. It's up to us to make the right choices."

Given his new location that borders "artsy" Southtown and acts as a doorway to the city's West Side and South Sides, Morales and company are already tweaking the menu to include sugar-free syrups, more fruit cups, baked chips and organic products. There's even a sugar-free mangonada in the works.

Even with the added third window and more staff members, the wait times at Big Daddy's will likely not go down any time soon. But when 100-degree temps come around, and as he gears up to plan another RaspaFest this August with other trucks, Morales will hold on to one tidbit – it's good for business.

"San Antonio loves shaved ice. They take it as seriously as the taco."