Everything but the Bowie in 'David Bowie Is' 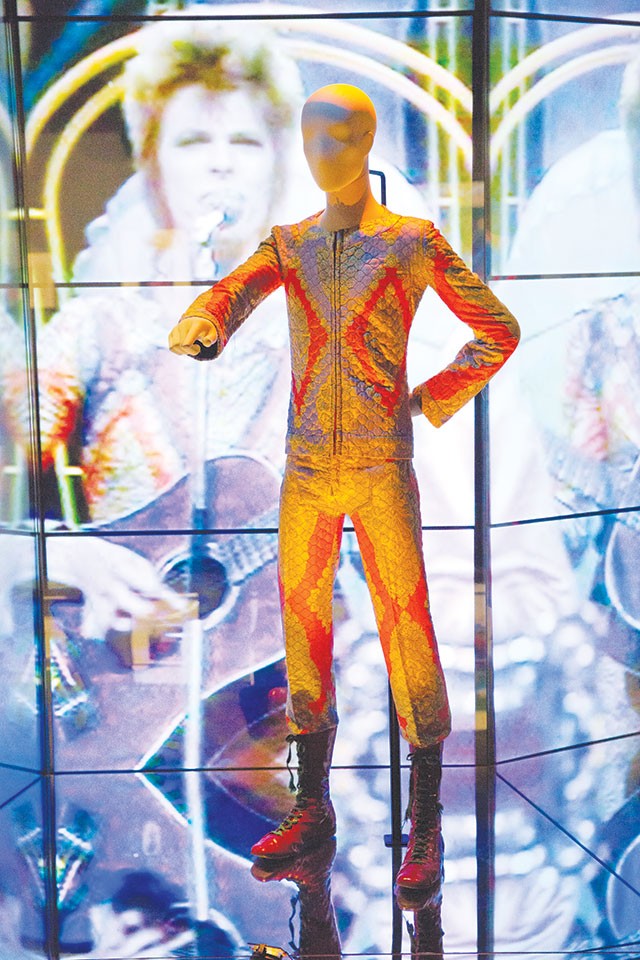 People love David Bowie more than you are capable of loving your family. But that’s OK—people love Bowie to an extent that your family would quite frankly find creepy.

Consider: (A) How many other gay icons were most likely just baiting the press when they came out of the closet? (B) His performance in Jim Henson’s Labyrinth—in which Bowie, pushing 40, portrays a goblin king who kidnaps 15-year-old Jennifer Connelly and her baby brother—is frequently described as “sexy.” (C) You can apparently get Pulp’s Jarvis Cocker, a man who used to be one of the biggest rock stars in a sizable portion of the world, to deliver a speech in tribute to Bowie at an event Bowie isn’t even at.

Cocker, along with many less-famous fanatics, gets the chance to give his filmed testimony in David Bowie Is, a documentary less about Bowie than about a museum exhibit about Bowie, also called “David Bowie Is.”

If that last sentence sounds confusing, don’t be misled: There’s no post-modern Exit Through the Gift Shop twist to wrap your head around. In fact, calling David Bowie Is a documentary at all seems almost charitable.

At its best, the 90-plus-minute film functions as a walkthrough of the exhibit. Curated by London’s Victoria and Albert Museum, and currently touring internationally, the exhibit includes original costumes, handwritten lyrics sheets, concept art for creative projects both famous and unrealized, and photos and videos from Bowie’s infancy to his most recent (for now at least) live appearances in the mid-2000s. And unless you’re going to be in Chicago between now and January, the lingering close-ups of these things are the closest you’ll come to them in the United States in the foreseeable future.

For super fans, the chance to stare at a bunch of Bowie’s stuff without risking a restraining order might be enough to justify the ticket price. Filmgoers seeking the full Bowie experience, however, will be disappointed by the very tangible gap between the production values of the exhibit and the film made about it.

At its worst, the film is more like a late-night infomercial advertising the exhibit, complete with cheesy PowerPoint transitions and inane testimonials seemingly from whoever happened to be standing around. While Cocker’s tribute is smart and moving, others brought in to basically eulogize Bowie—though, as one satisfied museum customer astutely points out, “He’s not even dead yet!”—only take up screen time better spent on pornographic close-ups of the many incredible items (a vintage synth used on the Berlin trilogy, the psychedelic kabuki “Starman” getup he wore on Top of the Pops in 1972) you might never actually get to see in real life.

Far removed from all of this, in classically frustrating Bowie fashion, is the Man Who Sold the World himself. He appears only in archival footage spanning his career from pre-“Space Oddity” promotional videos to a rendition of “Heroes” performed at a tribute for NYC firefighters following 9/11.

While the clips from films such as The Man Who Fell to Earth and Ziggy Stardust: The Movie offer a CliffsNotes version of Bowie’s rise to godhood for the uninitiated, the kind of fans dropping 20 bucks to watch a movie about a David Bowie museum exhibit will have likely seen most of it before.

But maybe, as the film seems to try to suggest, it’s fitting that Bowie—who’s interacted with us mostly through an ever-changing cast of characters expressing themselves only in oblique and art-damaged abstractions—is largely absent from his own retrospective.

To determine the nebulous shape of the man, maybe we assemble the puzzle pieces he’s left behind. The elaborate band costumes he was already designing in high school, for example, or the storyboards of a proposed Diamond Dogs film that momentarily suggest a great lost cult flick a la Jodoworsky’s Dune, or the dozen prototypes of the infamously tossed-off cover for last year’s The Next Day Bowie considered before finding the one exuding the exact type of not-giving-a-shit he wanted to convey.

Speaking of Bowie’s most recent masterpiece (not to mention the continued rumors of an upcoming tour) it’s probably the best indication of the kind of person David Bowie is—that is, the kind of person who won’t be caught dead on a pile of his own laurels. In short, David Bowie Is never going to appear in this kind of movie.