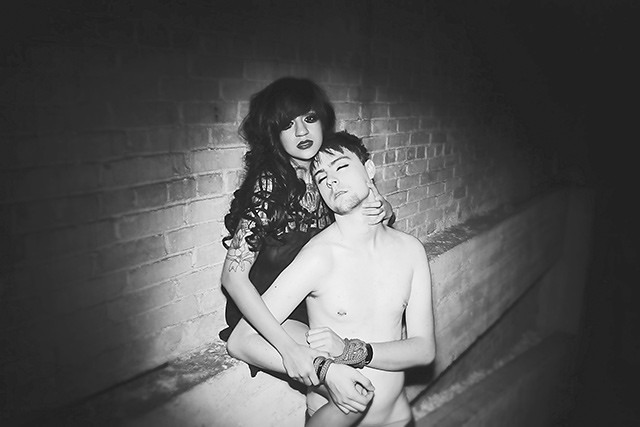 Bondage, domination, and sadomasochism have been around at least since the French Revolution, when the Marquis de Sade gave his name to the libertinism. From the outside, it’s difficult to see anything subversive in what appear to be displays of sexual violence. But undermining the heterosexual male gaze has long been part of the project. Sade was imprisoned for, among other things, sexual relations with his manservant.

Devries, a self-taught San Antonio photographer, went pro 14 months ago when she founded Amourpropre Photography. “I’m married, but I love the beauty of a woman,” said Devries. “I love everything — freckles, their flaws, their curves. I love it all. So, I started doing boudoir shots, but I wanted to go deeper.”

Caleb Cahill, a 19-year-old culinary arts student at St. Phillips College, took part in the shoot, one of his first experiences as a model. Though he is an avid follower of fashion, Cahill sees too many restrictions in the commercial modeling scene. “Every time I watch America’s Next Top Model, I just wish I were a woman so I could do this sort of thing,” Cahill said during the opening at Stonewall. “I never see any shows where a male does it. They always have that ‘straight’ face, and this masculine walk, and I think — you can do more.” Paired with Liza M, a female model he had never met, Cahill took on the softer role that had eluded his imagination.

“In this project, being this person who goes from cotton candy to someone seductive, it really empowers me to be something else, and try to portray it in a picture,” said Cahill

Devries is getting some attention for her efforts. Upcoming contract shoots will feature Saterra ShatteredVains of La Femme Fatale Burlesque and Rose Munoz, aka Gaige, one of the directors of the San Antonio Burlesque Festival.